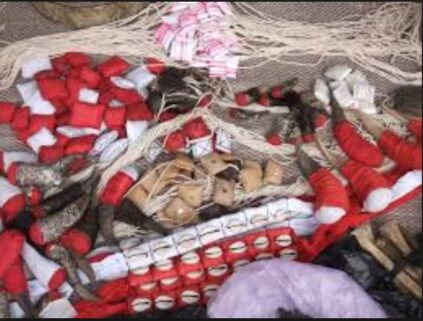 Beyond the quality of its players and the contribution of its supporters, the Senegalese national team has always called on a third force to try to win its matches: mystical practices. Present in Senegalese society, the mystical (black magic for some, maraboutage for others) or ”xons” in Wolof, has always (discreetly) accompanied the Senegalese selection. Through time and competitions, anecdotes abound, but not the evidence to demonstrate the effectiveness of this mysterious force of Lions.

Selected for you: Olympic Games for the Deaf: Senegal beats Uzbekistan (2-1) and advances to the quarter-finals

It all started on September 1, 1985. On that day, Senegal received Zimbabwe in a qualifying return match for CAN 1986 in Egypt. It’s been 17 years that the Lions have been chasing after qualifying for the African Cup and the State has provided the means for the team, beaten 1-0 in the first leg, to qualify. All ! Including mystical preparation.

“He is the personal marabout of a minister who took care of the mystical aspect, informs this old Senegalese reporter, now retired, who worked for a long time at Radio Television du Senegal (RTS). The main demand of the marabout was that the Lions, who always played with green, yellow or red jerseys – the colors of the national flag – play absolutely in white this time.

The surprise is therefore total for the 15,000 supporters present at the Demba-Diop Stadium who had never seen their Senegalese players in white. It is even more for the Zimbabweans crushed 3-0 thanks to a hat-trick from Jules Bocandé. Senegal finds the CAN, and the Lions definitively adopt the white jersey as their official outfit.

Since then, mystical practices, sources of beliefs inside the selection, and of fantasies outside, have been part of the decor and the history of the Senegal team. No important victory or defeat can be analyzed without appealing to the mystique among the supporters, but also among the technicians. And even sometimes among journalists.

In 2002, during the World Cup in Japan and Korea, the 1-0 victory of the Lions over the French Roosters was not just a technical-tactical affair for many observers. “Zidane, we neutralized him. The marabout only used a white thread and a match, ”says Pape, a member of the national staff from 2001 to 2010, to explain the injury to the thigh of number 10 of the Blues, five days before the opening match. “If we ‘neutralized’ him against us, why weren’t we ‘released’ him for the next France-Uruguay match? , asks this Lions defender who was part of the 2002 adventure.

This player passed by French clubs, remains anonymous, but does not believe in this version of Zidane’s injury. However, he admits the existence of mystical practices in the selection of Senegal. “It is sure that in 2002, the strongest delegation after the players, it was the marabouts. But our performances, we owe them only to ourselves. Anything mystical is there to give players confidence. Those who believe it…”

The French coach and his magic bracelet

During this Asian World Cup, the management of the mystical component of the Senegal Football Federation was indeed highlighted by the Court of Auditors which reveals in a report for the prosecution that the federal body had devoted nearly 140,000 euros (about 100 million FCFA) to the “psychological environment” and to “social affairs”.

Today, the one who has always been unofficially considered in Senegal as the “mystical gentleman” of the federation, Mbaye Ndoye, affirms with a laugh that we have “given too much importance to the xons”. “We never put money for xons at the Senegalese Football Federation. In civilian life, I am a customs officer, so I knew the borders and all the good marabouts. I was asking them for prayers for the team, that’s all. We win with quality players. The mystic did not have much importance in the national team. »

Pape insists: “We cannot say everything. Even a former French coach of the Lions (I will not tell you the name) was even convinced to the point of wearing a silver bracelet given by a marabout.

In 2006, during the CAN in Egypt, the duo of coaches Abdoulaye Sarr-Amara Traoré would have built their victory in Senegal’s first match on a piece of watermelon which he had given to a player. “He was so scared that he had a bad game, but Senegal had won 2-0 against Zimbabwe,” revealed Pape. At CAN 2012, the same duo will publicly invoke, in half-words, the mystical component to explain the elimination of Senegal in the first round with three “mysterious defeats, all by the same score: 2-1”.

The “xons” and the sacrifices, which range from the egg to the small white rooster passing by the big black bull slaughtered on the beach, are “effective” maintains Pape. Why then has Senegal never won a CAN, despite all its mystical arsenal? “The reason is very simple: first, the marabouts are at war. In 2002, for once, we succeeded in bringing together the best marabouts in the country. Then the players fight mystically among themselves too”.

“Yes, confirms this international central defender of Senegal passed by Guingamp and Lorient. I remember the disappearance of Salif Diao’s shoes in selection and that had cast a chill in the team. Coincidence or not, after this flight, Diao stayed almost two years before returning to the national team. It is definitely appealing.”

Almost all players in the Senegal national team also have their own personal marabout. Or marabouts solicited by their entourage for the most part dual nationals. “Binationals who grew up in France often arrive in selection saying they do not believe in it and do not indulge in it, testifies Pape. This is a serious mistake. Do you believe that the failure in selection of Sylvain Ndiaye, Demba Bâ or Mbaye Niang is due to their nullity? “. For the latter player, the press had mentioned the discovery of gray-gray on his bed in the middle of the African Cup of Nations in 2019 in Egypt. True or not, Mbaye did not score any goal during this CAN by being the center forward holder of the attack of Senegal.

“There are players who avoid each other, who do not rub shoulders for fear of being marabouted,” reveals A. Sy, a sports journalist who has covered nearly 10 CANs.

“It is necessary to have a marabout, supports the former defender of the Lions of Senegal. There is a big part of psychology in it, because the more your career goes, the more you believe in the effectiveness of the marabout. The less your career takes off, the more you will still ask the marabout to rectify the situation. In the end, it is intimately linked to your career. But some manage to forget that if they have reached this level, it is primarily thanks to their talent.

This is undoubtedly what happened to the former player of Saint-Etienne and Troyes, Chérif Ousmane Sarr. In November 2016, the man who almost signed for Arsenal when he was 17, filed a complaint against a marabout who had promised him that he would win “five Golden Balls”. Amount of the scam: more than 650,000 euros…

National team of Senegal: At the heart of mystical practices, between players, coaches and dual nationals