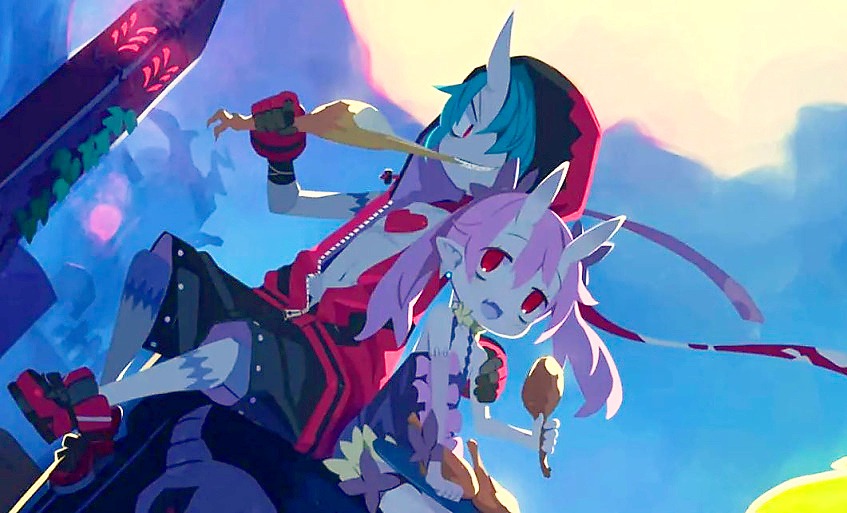 If since its release in Japan, Disgaea 6 had a PS4 and Switch version, in Europe we only had the right to the Nintendo Switch version. Today, a year later, the Tactical-RPG Disgaea 6 returns to us in a Complete edition (DLCs included) on PS4 and PC as well as for the very first time on a PS5 machine. The perfect opportunity for us to talk to you again about the game in its PS5 version, fully highlighting its content (DLCs) and its graphical/technical differences compared to the Switch version.

As you know, this is not the first time that NIS America has offered us a so-called “Complete” version for its flagship and very popular series, this was particularly the case for Disgaea 5 and Disgaea 4, of which you can read our reviews , or even Disgaea 1. It was therefore logical to see a complete edition for this episode having brought some new features. Having initially offered you a test of Disgaea 6 on Nintendo Switch, we are not going to go over all the mechanics, but only refresh your memory with a few excerpts below, then talk about the contributions of this “complete” version.

A darker atmosphere, but still as funny as the series
In one of the most miserable strata of the Underhive lives Zed, our main protagonist, who has become very pretentious, as well as his sister Beeko, also a zombie but unlike Zed, she is kind and innocent. Moreover, it is the only person who soothes this young zombie, while representing his haven of peace. Only today a threat hangs over their daily life (or death as you prefer) but also with many Underworlds: the appearance of the Divine Death-tructor, a being seeking and only thirsting for destruction . Zed then seeks to slay the Death-tructor. But can he destroy a monster of immeasurable strength? Well maybe, because since his encounter with the dog-zombie Cerberus, he has a considerable asset up his sleeve: the power of Ultra-Reincarnation, a power allowing him to reinforce his antiquated strength over his journeys and his many deaths. And that’s not all, this power can also be used to return to “life” an incalculable number of times, Zed has indeed already died many times (several thousand times even) against the Divine Death-Tructor but this ability also allows him to travel to other Underworlds. Even today, the duo’s quest and hunt for the Divine Death-Tructor continues…[…] 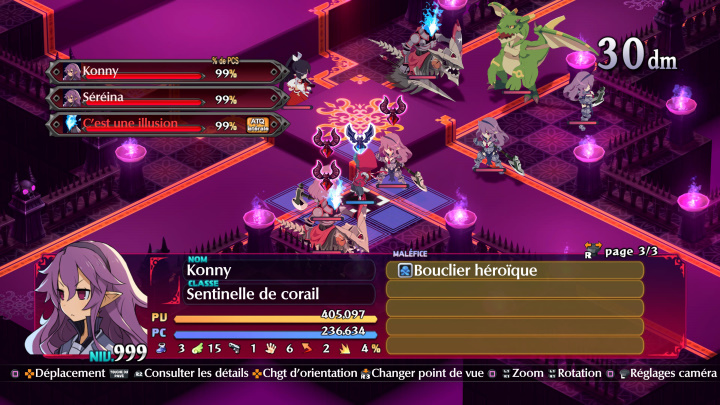 Still as effective gameplay and new features via comfort options
A pleasure that we also share in the multitude of options and features offered by the software, just like its elders before it. We therefore find this gameplay typical of TRPGs (Tactical-RPGs), that is to say generally small maps with a grid in its center, its share of various units to deploy (archers, soldiers, etc.), the moving squares, classic attacks, not to mention the unique abilities of each character. In addition to the operable placement on the flanks and in the back in order to grant more damage to the opponents, the Disgaea franchise had opted for a lifting / throwing approach in order to send its allies to distant squares for example, as well as combined strikes between allies, especially since the latter were at an equal and close distance in order to maximize the damage. Of course, the series had also implemented a system of Geo-Blocks consisting of specific colored boxes and “blocks” being of the same colors, the goal being to play the strategy by eliminating certain blocks in order to carry out damage, or even obtain bonuses by changing their color or removing it like a puzzle game.

For this latest installment, several new features and comfort options have been integrated, starting with the addition of new classes of demons considered to be giant units. The latter taking five times more space (five squares therefore), they are practical to prevent opponents from advancing and their attack zone wider than normal allows more strategic planning.[…]Speaking of counter-attack and strikes, Disgaea 6 – Defiance of Destiny does not go out of its way with its colossal damage reaching the quadrillion by dint of perseverance and reinforcement also linked to Ultra-Reincarnation. Moreover, if the enormous damage can already make you lose your head with the multitude of figures, the Level threshold too, the maximum level being today fixed at 99,999,999.[…] But be reassured, the rise in Level is much faster than in the past, and the developers have also implemented a double-edged feature for this kind of experience: automatic combat and speed acceleration by four in a first time. By combining the two features together, our troop performs direct attacks and special abilities to quickly overcome opponents. And it’s even possible to loop fights with a single button press.[…] Moreover, on this subject, the automatic mode even has a second feature associated with the presence of Malicious Intelligence linked to Demonicodes. For those who know the Gambits system of Final Fantasy XII in particular, it is quite similar since it suffices to associate the behavior of its allies and attacks / abilities according to three criteria. It is therefore quite possible to choose which type of opponent to defeat in priority and the type of attack. If once again the novices in the matter will have a great help, some players will perhaps feel too spectators in the face of this kind of welcome initiative.

Many upgrades, and Ultra Reincarnation
The additions don’t stop at the clashes but do continue in the main Underworld, the equivalent of a HUB of the game well known to fans of the franchise. As usual, a multitude of improvements and preparations are available, enough to customize your team quietly and serenely via recognized and appreciated features. We think in particular of the world of objects where we carry out various confrontations in order to make them stronger, the purchase of equipment and armaments, the cheat counter to manage among other things the gains of XP[…] or the creation of characters at the Assembly. An assembly where we can always put future laws in place by bribing “senators”, or threatening them with force, which happens quite quickly thanks to our superhuman strength of Ultra Reincarnation . This new feature closely linked to the plot of the main scenario somehow takes up the benefits of some Roguelike and even Die & Retry. If we find an evolution of classic characters, Ultra Reincarnation goes beyond the “limits”. To put it simply, when we use this option, our character is demoted to Level 1 but can spend the Karma points that we recover in return in order to increase the general stats (strength, etc.) and access permanent bonuses. Read more about the test.

When it was released at the end of June 2021, Disgaea 6 made a major change compared to the previous parts of the license, that is to say the integration of 3D characters, a contribution that is still debated today. Apart from that, the experience remained very good and in the pure vein of Disgaea, even if this Switch version suffered from graphic and technical problems.

Coming to PS5, Disgaea 6 logically keeps its initial content, including Laharlette, Asagi, Adel and Rozalin, already available on the Switch version. But we also note the integration of free and paid DLCs released during its year of marketing. In addition to color variants, money, manas, tickets, as well as equipment, we especially retain the DLCs of characters bringing both scripted missions, but also popular heroes/protagonists from previous parts such as Killia ( Disgaea 5), ​​Valvatorez (Disgaea 4), Pleinair, Mao, Raspberyl, Usalia (Disgaea 5) or even Desco (Disgaea 4).

Free on Switch, the Hololive DLC is again available in this complete version with its five protagonists: Polka Omaru, Rushia Uruha, Fubuki Shirakami, Flare Shiranui and Watame Tsunomaki. With all these additional warriors, you have a real good troop for your confrontations!

Now let’s move on to the graphic / technical part of the software on PS5. Unlike the Switch version which offered us three different modes and experiences, namely “Performance”, “Playability” and “Balanced”, here only two modes are present: playability and performance.

First good news, the unsightly and blurry effects on Switch are only a distant memory, indeed this PS5 version offers us a much cleaner and more pleasing to the eye, regardless of the mode chosen. But that’s not all, the second good news concerns the framerate which turns out to be very stable, we will just note a few shading effects with different qualities.

This PS5 version therefore eliminates the great inconveniences experienced on Nintendo Switch, but logically does not benefit from portability. Note that the English and Japanese dubbing are once again available, and that the subtitles are in French.

In addition to these valid in-game elements, physical version collectors will appreciate the few bonuses present in this edition. In addition to the Blu-Ray of the game, there is the OST “Defiance of Dissonance” (selection of tracks) on CD, a reversible jacket and a mini manga. The latter, fully illustrated in color is called “Tales of Super Reincarnation”, and is translated into our beautiful language. A plus that you can read without risk before starting a game, and which changes from the traditional artbook of the publisher.

A year after its availability on Switch, Disgaea 6 is therefore coming to PS4, PC and PS5 (our test console). On the menu, a complete edition bringing together emblematic characters from the series and a well-stocked basic content. If logically the adventure cannot be experienced in nomadic mode on this medium, it has better visual and technical comfort than its Switch counterpart, and makes it a considerable attraction for future buyers. Actual rating: 7.5/10.