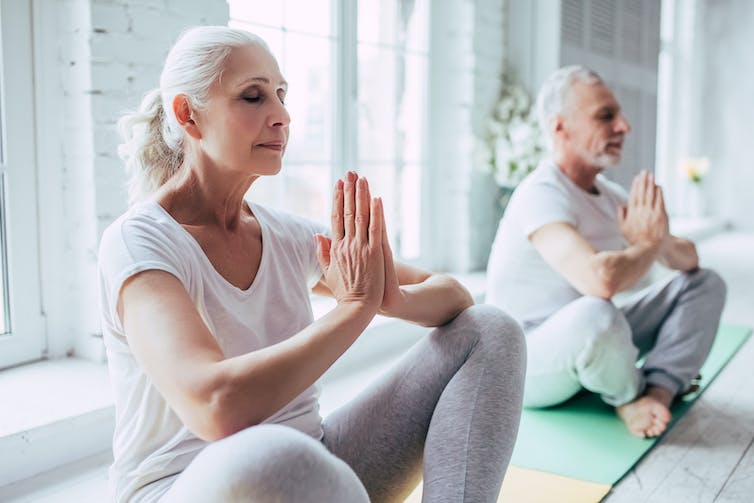 Over the last decade, yoga has become trendy, as evidenced by the multiplication of its variations, more or less fancifulor the creation, in 2015, of a “International Yoga Day”.

Many benefits are attributed to this discipline, and scientific work has sought to assess its effects on health, as well as its ability to improve the situation of patients suffering from various pathologies, such as low back pain, cancer or heart problems, for example. The consequences of practicing yoga have been studied not only in the general population, but also in specific populations: adolescents, people with mental disorders, etc.

The results seem to indicate that doing yoga does indeed result in different positive effects on physical health. This practice allows improve balance, flexibility, as well as strengthen muscles and the heart. Yoga could also have a beneficial effect on the immune systemand have an interest in pain management.

What about mental health? We now know that for the latter, practicing physical activity is beneficial. Yoga is no exception. It even has a direct effect on the brain. Explanations.

Yoga has the particularity, compared to other types of physical activity, of combining sequences of movements with breathing control and attention regulation exercises. In a recent meta-analysis, in other words a statistical analysis of data published in the scientific literature (a “analysis of analyses”), Chinese researchers have dissected the results of 15 scientific publications having studied the effects of yoga as well as practices belonging to the same type of “body-mind” physical activity (tai-chi-chuan or taiji, qi gong, baduanjin, wuqinxi…). In these various works, the researchers had notably used magnetic resonance imaging (MRI) to observe the effects of yoga on the brain.

The analysis of all the results of these different studies shows several improvements in practitioners of these body-mind activities, including a increase in the size of certain regions of the brain as well as their activity. These changes mainly take place in the prefrontal cortex, hippocampus, temporal lobe, insula and cingulate cortex, structures essentially involved in emotional regulation, memory and self-control. The researchers also observed better functional connectivity in high-level brain networks, such as that of cognitive control (regulating attention, inhibition, working memory, etc.) and that of default mode (network of thoughts and emotions of self and others).

Another meta-analysis showed that brain changes observed in MRI could be linked to behavioral changes (observed during psychological evaluations of yoga practitioners through questionnaires, observations, or interviews). How do these brain changes affect their daily lives?

A meta-analysis of 42 studies looked at the effect of yoga practice on stress. Stress is a biopsychological response resulting in particular in physiological symptoms, negative thoughts and cognitive slowing. Yoga seems to contribute to stress reduction by decreasing the amount of cortisol, the main stress hormone. These results remain to be qualified and require more in-depth studies with in particular more participants and longer interventions to judge a long-term effect of yoga on stress.

This would be explained by the fact that a yoga session is punctuated by meditative moments where practitioners must frequently focus on their breathing, on a specific part of their body or even on what they feel at the present moment. . These moments of meditation would help better regulate the activity of these brain regions, while the activity associated with mental workload or stress would be reduced.

Anxiety is an overflow of emotional regulation capacities manifested by the symptoms found in stress. It looks like diffuse worry, associated in particular with difficulty concentrating and falling asleep. Depression is a psychiatric disorder characterized by a dysregulation of emotions associated with a feeling of sadness or persistent despair, as well as a loss of interest and withdrawal into oneself.

Anxiety and depression are associated with a change in the activity of the amygdala, a brain structure particularly involved in negative emotions.

A meta-analysis of 27 studies conducted on children and adolescents investigated the effects of yoga on anxiety-depressive symptoms. The participants are either typical people or people with various pathologies (ovarian pathology, cardiac pathology, digestive disorders, etc.). This analysis revealed that 70% of this work showed an improvement in the mental health of young people following the practice of yoga, and more particularly in anxiety and these results are directly related to the decreased amygdala activity found in practicing adults. These beneficial effects on anxiety-depressive symptoms also been highlighted in adultsas well as in people with an anxiety-depressive disorder.

Since studies in this field of research are still recent, they are still few in number and heterogeneous in their protocols. It is therefore necessary to remain cautious in interpreting the results. In addition, in the event of an anxiodepressive disorder, the practice of yoga does not replace medical and psychological care. These results nevertheless suggest that yoga could not only be used as a physical activity, but also to improve mental health.

The practice of yoga also seems to have an impact on cognitive performance. A meta-analysis published in 2020 and covering 13 articles shows that following yoga sessions, adults with or without cognitive impairment presented improvements in their attentional, memory and inhibition performance.

These improvements could be related to the brain changes observed by brain imaging, in particular the increase in the amount of gray matter in the hippocampus, the medial temporal lobe, the prefrontal cortex, the insula and the cingulate cortex, regions intimately linked to cognitive performance. In addition, the increased activity of the frontal regions of the brain is sustainable. However, the authors of these works recommend conducting more in-depth studies, on larger samples and using standardized protocols (randomized controlled trials), in order to improve the quantity and quality of available data.

It is important to note that the improvements observed seem particularly due to the mindfulness and meditation exercises that punctuate the yoga sessions. During the sessions, the use of these exercises could have an essential synergetic effect. This could mean that, to observe the effects of yoga on anxiety symptoms and cognition, it is necessary to learn how to direct one’s attention to the present moment and one’s emotions. In addition, other factors such as being in a group during the sessions and having positive interactions could also contribute to the reduction of anxiety-depressive symptoms.

If you want to practice yoga and see for yourself its effects, you have to answer one question: which one to choose? Among the many existing types of yoga, three come up regularly in the studies we have reviewed: Hatha yoga, Kundalini yoga or Kripalu yoga. If you had to pick one to start with, this is probably one of them… Just find a class near you!