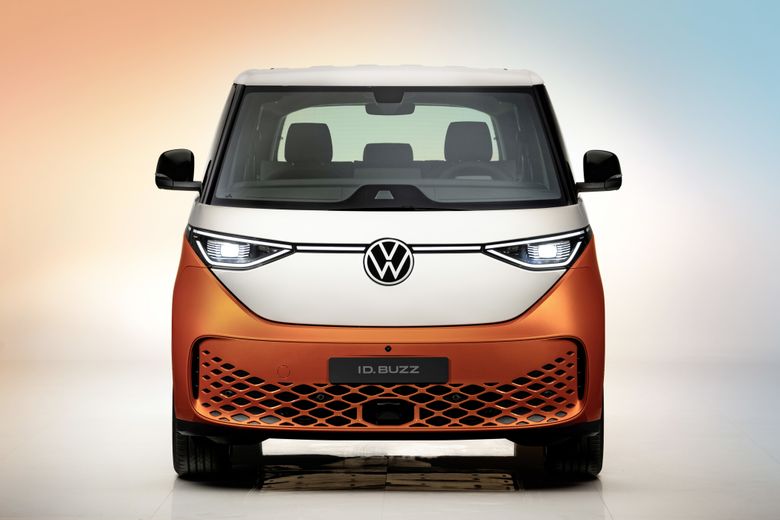 After five years of development, the pretty little van, available in Cargo or passenger transport version, for five passengers, entered Volkswagen dealerships in mid-November. A hell of a face, a time machine that draws on collective memory, that of the sixties, the beat generation and surfing in California. But in zero emission mode.

The VW logo is a little smaller, the light signature around the fine headlights a little less intense, the mirrors have returned to classic. Its muzzle has slightly lost its roundness and the black between the glass surfaces has blurred the very marked “feet” between the openings. But from the concept car revealed by Volkswagen in 2017, at the Detroit Motor Show, the ID. Buzz, which entered dealerships on November 21, has retained the essential: the timeless.

The exercise of “revival” is never easy. Fun and friendly, the New Beetle, in two generations, has not quite managed to reincarnate the Beetle. The ID. Will Buzz be able to do it with the mythical Combi, the future will tell. But with his name to talk about and his face to die for, teased from salon to salon for five years, we would tend to put a coin on it.

VW, says Julien Boix, from the brand’s utility vehicle dealership in Montpellierthe place “in the smile generators segment”, the one that makes you turn around in its path. And “the nod to memory goes well”in three weeks, he has already seen a knock on his door “customers aged 50, 60 who are happy with a vehicle resembling the old Combi”.

The line begun after the war, with its large simple surfaces, the two-tone in the top-of-the-range versions of the time – which could be distinguished by the number of windows (up to 23!) – and these large round eyes framing the huge logo, never stopped. We are in the seventh generation since 1947, utility or minibus, under the names Transporter or Multivan. But like the Microbus in 2001 or the Bulli ten years later, which remained as living room prototypes, this ID. Buzz will look for his references on the side of the T1 of 1947 and create a new range.

416 km range, according to WLTP standard

“It’s not the equivalent of the Transporterpoints out Julien Boix, in terms of volume and loading capacity. The brand’s desire is to move forward in electromobility, to electrify the vehicle fleet as much as possible: the ID. Buzz follows this logic. It started with the car and is developing on the utility, to provide electrical solutions to craftsmen and individuals, especially in low-emission zones.

Smaller than a thermal Transporter, at a height of 1 m3 and 300 kg in carrying capacity, the van – to call it a van would be inappropriate! – none the less one “multipurpose vehicle”. In its Cargo version, it is able to move two pallets and 650 kg, three passengers in its cabin. Positioned at the rear, the engine responsible for propelling the 4.71 m and 2.2 tonnes of the vehicle is therefore electric, with a power of 204 hp (150 kW), perfectly silent when you remember the characteristic sound of the four – air-cooled flat cylinders, which the Combi once shared with the Beetle.

With a 77 kWh battery “placed in the floor, selfindicates the Montpellier sales representative, is 416 km according to the WLTP standard. Loaded, you can expect to travel 350 to 360 km” before having to plug it in, if possible to a high power outlet, it can tolerate up to 170 kW. “The battery is thus recharged from 5 to 80% in about 30 minutes”emphasizes the German brand.

The range, for the launch, has been “wanted very simple”, observes Julien Boix. Two versions cohabit, one called People internally by VW for five passengers, with more than 1,100 liters of “trunk”, the second Cargo intended for professionals and private individuals who need a large loading capacity (3, 9m3) for their recreation. “Only one finish is available and very few options, but it is well equipped from the start.” An elongated model, for seven passengers in the sedan version and with a larger volume in terms of pure utility, will follow in 2023.

In Montpellier, after three weeks of marketing, in addition to those on which the design acts like a Proust madeleine, the first buyers, notes the salesperson, “are people who are preparing for the ZFE, people who are already customers of the brand or who are attracted by a product which, unlike its competitors, was thought to be electric from the start”. In Cargo version – “90% of customers rent it” -, it costs 47,990 euros excluding taxes, 56,990 euros including tax for the family van.

[VIDEO] ID. Buzz: the electric reincarnation of the legendary Volkswagen Combi for families and for professionals