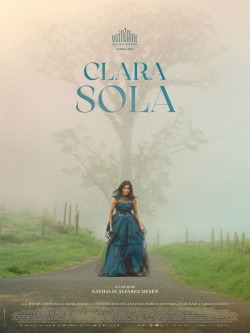 How does a woman, isolated in a remote village in Costa Rica, prisoner of an archaic social straitjacket and religious beliefs from another time, find the path, extraordinary, of insubordination? For her first film (covered with prizes since its presentation at numerous festivals), Nathalie Alvarez Mesén, a young Swedish director, returns to the country of her origins and draws, with her co-screenwriter of Colombian origin, Maria Camila Arias, from the sources of ‘ magic realism’ permeating Latin American literature. With “Clara Sola”, the filmmaker, distanced from any feminist demonstration, composes the singular portrait of a person with extreme sensitivity, with a body and with hindered desire, locked in an imposed role of miraculous ‘healer’. A being apart, a brunette beauty with a quivering physical presence, instinctively linked to the flora and fauna of the surrounding forest. By the force of the staging attentive to the palpitation of the living in the middle of nature and to the inner movements of the rebellious heroine, we perceive the progressive metamorphosis of Clara, neither witch nor Madonna but free figure of an emancipation, sensual and spiritual. at a time. A captivating fable in the form of a subversive celebration of the marriage of animality and humanity.

Clara, the torn between family oppression and harmony with nature

In the lush and verdant thick forest surrounding the small Costa Rican village in the middle of which Clara lives, maintained with an iron fist by the community of women (in particular the grandmother with undisputed authority, and the mother frozen in her Christian beliefs ), the forty-year-old young woman (powerfully embodied by Wendy Chinchilla, the actress and dancer, and the only one in the profession among non-professional partners, with intense acting) in a disabled status (her scoliosis maintained by a corset) and a supposed supernatural power (reincarnation of the Virgin Mary, endowed with the power to heal the sick who come to visit her).

Demonstrating in the restraint of the body her lack of appetite for this cumbersome mission, treated like a child whose access to desire is guilty and forbidden, Clara visibly blossoms in the limitless space offered by the wooded countryside of this small mountainous area. By tiny details captured by the camera (the contact with the insects, the touch of the foliage, the flight of fireflies, the physical attachment to the white mare, the alert ear sensitive to the song of the birds and other rustlings of the life in nature), Clara appears to us instinctively in unison with the earth, the vegetation and the animals that inhabit it and cross the sky.

Sweeping away the apparent autism and the dominant silence that characterize her, our heroine, reluctant to any domestication, opens up more and more to her environment. The arrival of Santiago in charge of taking care of the mare will not be unrelated to such a transformation. Alternating moments of impulsive (and violent) revolt, sources of scandal in the village, and tiny vibrations rising from the depths of herself, the body unties, the spirit frees itself, accessing sensations, emotions and desires. unprecedented, overflowing consciousness, unbridling inner exile.

From intimate thrill to hallucinated vision, a sexual and spiritual liberation

We could stick to the most spectacular in the sexual appetite of an uninhibited Clara with an almost carnivorous voracity as the opacity of the character resists simplistic explanations. In the ‘animist’ relationship that Clara develops with nature and the beings that live there, her own animality is not absent, the ‘suspicion of a wolf’ in her, as the director points out. A mysterious ambivalence, making her oscillate between animality and humanity, from adherence to the slightest signals emitted by the earth (whose only she perceives the tremor) until having the sensory experience of a fusion with the elements that compose it to the point of seeming to disappear into the landscape. However, the process is not completely accomplished, in a vision on the edge of the fantastic, bathed in light, Clara standing up touches her body and spreads her hands as if she perceived its changing morphology. In the distance, the attractive whiteness of his beloved mare stands out. And the bringing together of the planes depicts in a striking way the fragility of the border between the animal and the woman, the insubordination which brings them together and the sexual and spiritual emancipation which belongs only to her.

Magnified by the sensual camera of the director of photography, Sophie Winqvist Loggins, punctuated by the original musical score by Ruben de Gheselle marrying the invisible earthquakes of the heroine, the surrealist fable by Nathalie Alvarez Mesén gives us to see and hear through its infinite shimmers the singular and disturbing emancipation of a woman to discover herself.