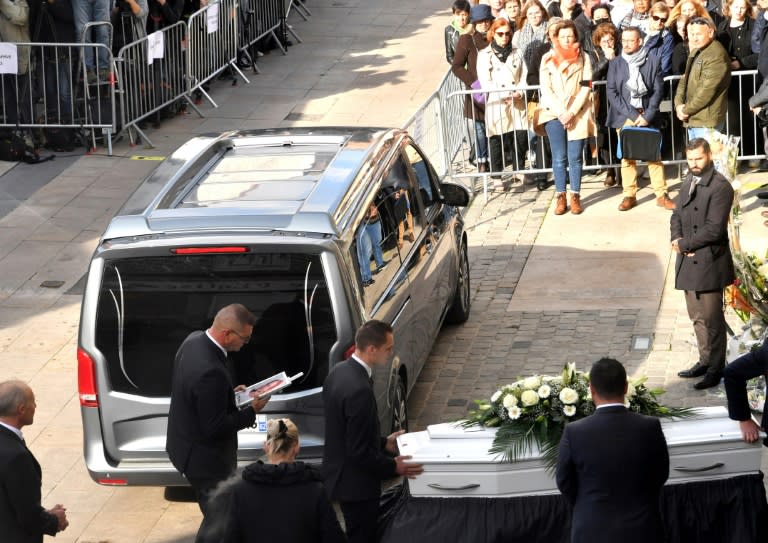 “My Lola, my adored little sister. We will miss you”: several hundred people attended Monday in Lillers (Pas-de-Calais) the funeral of young Lola, whose savage murder at the age of 12 has turned the country upside down.

The white coffin covered with flowers entered the church followed by the parents of the teenager, her brothers, her relatives, elected officials, neighbors, and a crowd of anonymous people in an emotional silence.

“My Lola, my darling little sister, I hope you can hear me from up there. Unfortunately, you left much too soon. I couldn’t tell you how much I loved you,” said at the microphone one of his brothers, Thibault, in tears. “I hope I’ve been there enough for you in your life. You will be missed.”

“Your departure today devastates us and annihilates us. Our grief is immense. Without a doubt, we will endeavor to honor your memory, my little princess”, had previously delivered one of her relatives, under the vaults of the collegiate church. Romanesque, full to bursting.

Several hundred people followed the ceremony outside, thanks to an audio broadcast on the church square, emptied of its cars.

The family had opened the funeral to the public, while reaffirming Sunday evening its desire to “honor the memory” of Lola in “respect and dignity”, far from any political agitation.

The burial in the cemetery of Lillers, a town of 10,000 inhabitants from which his mother originates, was to take place “in the strictest privacy” at the end of the afternoon.

On the pews of the church, neighbors from rue Manin, in Paris, where the young girl lived, and friends from the campsite in Pas-de-Calais where the family spent their holidays.

Interior Minister Gérald Darmanin and other political figures, including RN MP for the constituency Caroline Parmentier, were in the front row.

Among the anonymous people who came to attend the funeral, Sabine Vizenski, in tears, accompanied by three grandchildren, “of Lola’s age”, who “asked to come”. “We are here to show our support as best we can.”

“I drove 30 minutes, it was very important for me”, confides, further, Thomas Maillot, 55 years old. “To do that to a kid that age…there are no words.”

Referring to “Lola, 12, not only left too soon, but in unbearable circumstances”, he called not to “stay locked in suffering”.

The tragic circumstances of the death of the child, abused, asphyxiated and found on October 14 in a trunk in the courtyard of his building, aroused great emotion in the country.

From the gates of his residence to the mailboxes of the municipalities of his relatives, thousands of people sent their condolences. “Thank you all for your support,” Lola’s mother wrote on Facebook Friday.

Bouquets from his gym club or his primary school rubbed shoulders on the altar around the coffin with those of the “Friends of petanque” and the President of the Republic.

In front of the family’s Parisian home, residents and acquaintances came to gather at the time of the ceremony on Monday.

“I remember Lola when she was in kindergarten, what happened to her is just unbearable,” says a childminder. In a nearby parish, candles are lit under a portrait of the girl.

“What touches us all? It is the atrocity of this crime”, was moved Friday the president Emmanuel Macron, affirming that the family of Lola had “need the respect and the affection of the nation”.

The presence in France of the suspect, Dahbia B., an Algerian under an obligation to leave French territory (OQTF), has aroused strong criticism from the right and the far right, the government castigating “the indecency of this “political recuperation”.

In Strasbourg, a journalist from Rue 89, Guillaume Krempp, filed a complaint on Monday for threats after a rally in tribute to Lola organized on Saturday by Action française.

The EELV mayor of Lyon Grégory Doucet wrote to him on Monday to President Macron to demand the “immediate dissolution” of the “Remparts”, a structure heir to the dissolved far-right association “Génération identitaire” after a rally marked by slogans xenophobes.

Eric Zemmour and the RN had also organized events.

The family have repeatedly demanded that “their child’s name and likeness cease to be used for political purposes”.

Manga : les 15 meilleures nouveautés 2022 - Lecture
The cultural choices of the “Point”: dive into “Avatar” or dance on Broadway?
Harness the power of monsters in Voice of Cards: The Beasts of Burden, out now
Tweet
Share
Share
Pin