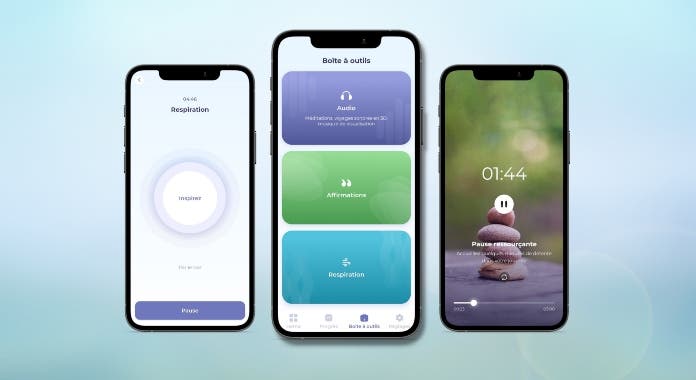 Trauma, lack of self-confidence, fear of rejection, abandonment or misunderstood blockages… the “breathwork” is a meditation technique that allows you to overcome your emotional blockages. Based on hyperventilation breathing, this active meditation promises total letting go and powerful inner revelations. In other words, this practice might just change your life. How to apply the “breathwork” when you are new to meditation? We tell you everything.

Freshly arrived from the United States, the “breathwork” attracts more and more followers in France. It consists, through a breathing exercise, in change your state of consciousness to reconnect with your inner beingand thus master and release emotional blockages.

The effect would be similar to taking LSD. As early as the 1970s, scientists had observed the therapeutic effects of this drug, when its dosage was controlled. After its ban, psychiatrist Stanislav Grof continued his research in order to know if one could obtain these effects in a natural way. It was with his wife Christina Grof, then a yoga teacher, that they found an alternative by developing the technique of “holotropic breathing”. Breathwork is a variation of this technique.

Thus, the breathwork develops the principles of “holotropic” breathing, inspired by “pranayama” (ancestral Indian breathing method – editor’s note) but also by “rebirth” (breathing method to bring back buried memories – editor’s note). This sort of meditative trance also aims to externalize certain repressed emotions that prevent you from living your life to the full.

How is breathwork practiced?

The breathwork sessions are practiced in musicwhich allows in particular not to lose concentration because of the sound breathing of others, in groups, or individually. The breathing exercises at a steady pace last about twenty minutes. The effects can be intense: some start crying, others laugh euphorically or squeal.

“Thanks to the breath, energy flows more freely, which stirs up dormant emotions. After a few minutes, a phenomenon takes place thanks to this breathing, called transient hypofrontality. The frontal part (analytical, intellectual) of our brain goes to sleep: there follows a loss of the notion of time, a feeling of euphoria, we are in love with life”, explains Susan Oubari, pioneer of breathwork in France. to Yoga-Magazine

Concretely, we start the session with our eyes closedhand resting on stomach. We inhale deeply through the mouth and at the level of the belly, as if we were going to capture what is buried in us. Without deflating your belly, you inhale a second time by inflating your chest. Then, for about twenty minutes, to music and without stopping, we exhale energetically. The session ends with 10 minutes of silence and nasal breathing, in order to descend gently.

Note that this practice is not recommended for pregnant women, people with heart problems or those with chronic diseases.

Towards a gentler relaxation ritual

” A healthy mind in a healthy body. » We repeat it to you, of course, but overcoming emotional blockages requires a long personal work, which bears fruit especially when it is complemented by a healthy lifestyle. However, it is difficult to know what is needed in real time. Calming your mind can be learned.

How to try this technique when you are new to meditation? Several spaces have opened in recent years, particularly in Paris. The American Susan Oubari, for example, created the course Breathe in Paris. If you don’t live near the capital, some apps can help you get started.

If you want turn to much gentler techniques to unwind / relax, thanks to nasal breathing, we recommend, for example, the Envol wellness application.

She offers, among other things, guided meditations, 3D sound journeys and breathing exercises. Tools based on soft, long and deep breathing. In particular, we recommend that you test their breathing exercise based on cardiac coherence (5 seconds of inspiration and 5 more of expiration) in order to place yourself in a state of pure relaxationas well as their “Rejuvenating Break” meditation (free throughout the month of March) which helps you relax by visualizing your breathing.

Next to this, the Envol application indicates a “well-being score”, which allows you to find out live what you are missing in terms of sunshine, healthy food, nature, movement, mental rest, sleep and gratitude. Something to feel in top form every day!

And you, have you ever tried the “breathwork”? Did you know Envol App? If not, what are those (methods or applications) that have helped you overcome your emotional blockages? Share them with our readers on the forum of The Body Optimist !

This meditation technique would allow you to overcome your emotional blockages