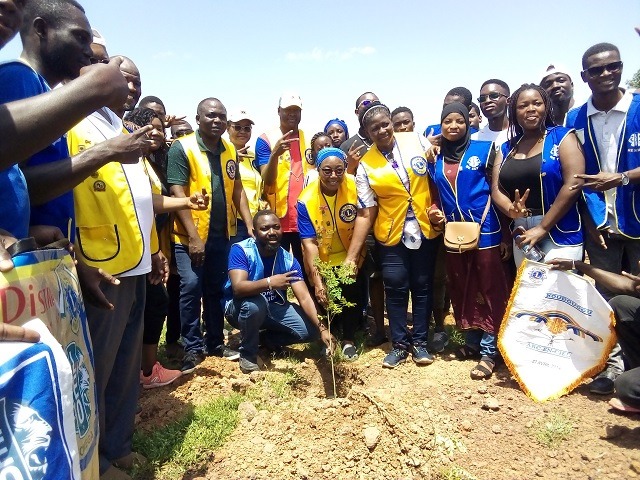 Dozens of members of the 41 Leo clubs in Burkina, assisted by their senior Lions including the first leaders of District 403 A3, planted “useful” on the Djiguemtenga site in Koubri, at the southern exit of Ouagadougou, on Sunday September 4, 2022 According to the initiators of this reforestation, a total of “300 plants”, mainly nimiers and moringa trees, were planted on the secure land with water supply to facilitate the maintenance of the plants.

It is a hundred Lion cubs from Ouagadougou, Bobo-Dioulasso, Koudougou, Banfora and Ouahigouya who took part in the reforestation of their association on the site, a farm of the co-sponsor of the activity, the Lion Harouna Zoundi, in Djiguemtenga, a locality of Koubri. It should be noted that the patron of the ceremony is Dr Daouda Diallo, Governor of the District with the godmother Félicité Drabo and co-sponsor, the Immediate Past President of the Commission, Harouna Zoundi.

After performing the Lions and Leos Hymns, the minute of meditation was done by the President of the Leo Commission for this mandate, Mrs. Félicité Nignan. She prayed that the populations would be spared the problems linked to the last rains with their batches of floods which are testing the Burkinabè enormously. As for the president of the Environment Commission, responsible for supervising all the activities of District 403 A3 for this mandate in relation to the environment, Brigitte Diakité, she said that she had come to “support” the Leos because it is one of their great activity. The one the Leos affectionately call “Tata Brigitte” greeted and encouraged the goddaughters of the Lions for their commitment to preserving nature.

In an atmosphere maintained by musical entertainment distilling the sounds that young Leos love, the members of the lion cub clubs, an activity before the actual tree planting, carefully followed a guided tour of the farm. Their co-sponsor, who was the guide for the occasion, toured the site to show the Leos “the importance” of investing in the agricultural, pastoral, poultry and other sectors experienced by his farm.

This tree-planting ceremony falls within the framework of the five global causes, namely the fight against diabetes, childhood cancer, eyesight, hunger and the preservation of the environment. “The particularity of this reforestation is that we Leo have decided to plant useful trees that can serve us today and in the long term,” said Idrissou Félix Compaoré, president of District Leo 403 A3 for the 2022-2023 term. . He expressed his “satisfaction for the strong mobilization” of his comrades who made the action “a success”.

“The Leo club is not only a humanitarian association. It is also an association that works in training for the personal development of young people, “said Mr. Compaoré, noting that this is the reason why, during their activities, they put training themes for the benefit of young people. . “There was a guided tour of the premises which gave Leos ideas for entrepreneurship, particularly in agribusiness,” he said, adding that similarly, board games and sports programs including the maracana will strengthen the cohesion between members of the Leo family.

Félix Compaoré thanked the Lions, in particular the leaders of the association who made the trip to “honor, support and encourage them”. “It’s heart-warming,” he confessed.

The planting was done on a site respecting the conditions ensuring the protection and survival of the plants. Indeed, planting on a place that has a borehole, the sponsor, Harouna Zoundi, indicated that “there are people designated to take care of these plants carefully”.

He recalled that the Leos had planted “useful” two years ago on the same farm and that the plants, in particular the baobab, the nimier and the moringa, are currently and greatly benefiting the populations living around the site. “It’s been two years since we and our neighbors almost do our market here,” he said with a small smile, maintaining that “here we do integrated production”.