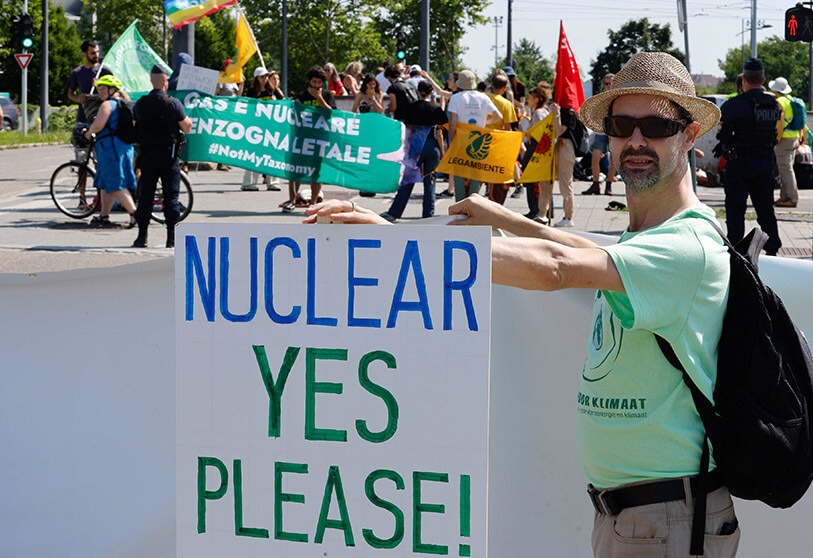 The European Parliament has given the green light to qualifying natural gas and nuclear energy as sustainable. MEPs on Wednesday rejected a proposal to exclude these two sources from the “European taxonomy”, approving the Commission’s proposal. This taxonomy aims to classify economic activities according to their sustainability, directing private investments, through incentives and benefits, towards the sectors most necessary for the energy transition. And now, barring a qualified majority vote against in the Council of the EU, gas and nuclear energy will benefit from this regime from 1 January 2023, being able to benefit from millions of investments.

The vote was very tightarousing passions on both sides, but in the end 328 deputies, in particular from the conservative, liberal and extreme right, won, against 278 social democrats and left-wing deputies opposed to this appointment.

Mairead McGuinness, Commissioner for Financial Affairs, welcomed the outcome, calling the Commission’s draft legislation, known as an ‘additional delegated act’, a ‘pragmatic proposal’ which will ensure that private investment in these two sources of energy meet “strict criteria”. “Our proposal ensures transparency so that investors know what they are investing in”she said.

Speaker of Parliament Roberta Metsola stressed the need to maintain ambition on climate targets. “This Parliament will stand firm in asking us to remain ambitious and at the same time realistic to ensure that immediate short-term measures do not become the new normal in the medium term,” she said.

If adopted by the Council, these two sources will be classified as transitional, as there is no technologically or economically viable low-carbon alternative, which gives them fewer advantages than the energies described as green. The Commission’s idea is that these two sources can contribute to efforts to achieve the energy transition. “Nuclear and gas activities will allow us to move away more quickly from more polluting activities – such as electricity generation from coal – to move us towards a climate-neutral future, based mainly on renewable sources”, explains the Commission in the press release presenting the project.

According to the European Green Deal, the EU aims, by 2030, to reduce its greenhouse gas emissions by 55% compared to 1990 levels and to achieve carbon neutrality by 2050. Brussels expects gas and nuclear energy to contribute to this ambitious objective on a temporary basis and by respecting a number of requirements.

The construction of a nuclear reactor usually takes between 5 and 20 years, depending on the timing, and its service life is about 40 years, which can be extended by proper maintenance. Europe’s energy future could therefore remain linked to this source beyond the turn of the century. Although its economic cost is very high, attracting new green investments could boost the sector.

The division in the EU

Opponents of the project have accused the Commission of abandoning the path of climate transition and allowing the “greenwashing” of companies. “From now on, the Commission will have to stop pretending that the EU is a leader in global climate action – how on earth can we demand that others stop using fossil fuels when we ourselves have decided that natural gas is a green investment?” said Silvia Modig, a Finnish MEP from the European Left.

Greenpeace’s EU office also condemned the energy vote, calling it a “scandalous result to qualify gas and nuclear energy as green […] and further fill Putin’s war chest”. The NGO has also promised to take the case to European courts.

The measure was also not well received in some capitals. Luxembourg and Austria have announced their opposition to the agreement and will also appeal to the Court of Justice of the European Communities. “It is not credible, not ambitious, not knowledge-based, it jeopardizes our future and is beyond irresponsible”lamented Austrian Environment Minister Leonore Gewessler.

But, except surprise, the law will be adopted. The proposal to exclude gas and nuclear energy will now go to the Council, the co-legislator in which the 27 EU member states are represented and which acts as an upper chamber. To come to fruition, this project would have to overcome a complicated metric, with at least 20 of the 27 countries representing 65% of the total EU population voting in favorwhich is highly unlikely.