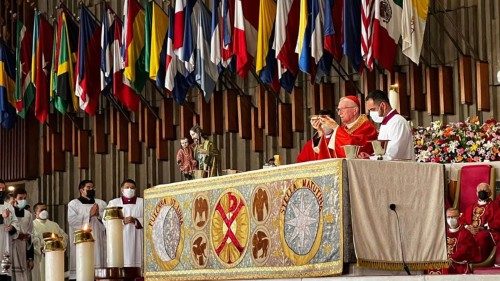 On the occasion of the 30th anniversary of the restoration of diplomatic relations between Mexico and the Holy See, the Vatican Secretary of State recalled that the Catholic Church is a valuable collaborator of States in promoting social harmony and of the search for the common good, for which religious freedom and taking into account its public dimension are essential.

The thirtieth anniversary of the restoration of relations between Mexico and the Holy See was celebrated with a conference organized by the Apostolic Nunciature and the Mexican Ministry of Foreign Affairs, which brought together this Tuesday, April 26, the participants around the theme “Positive secularism and religious freedom”. Among them, the Mexican Minister of Foreign Affairs, Marcelo Ebrard Casaubón, and Cardinal Pietro Parolin, Secretary of State of the Holy See, as well as Cardinal Carlos Aguiar Retes, Primate of Mexico, and Msgr. Rogelio Cabrera López, Archbishop of Monterrey and President of the Mexican Episcopal Conference (CEM).

“Emotion”this is the word that Cardinal Parolin used when recalling, at the beginning of his speech, the work carried out between 1989 and 1992, when, “young priest assigned to the apostolic delegation in Mexico”he witnessed the intense activity of the Mexican Episcopal Conference, of the civil authorities and of those who, in the name of the Holy See, in particular the nuncio Girolamo Prigione, started a new path in the history of relations between the Church and the Mexican State.

After recalling that the Catholic Church in Mexico is in the front line to serve the population in the various areas of its pastoral action, from education to health, including the catechetical, charitable and liturgical dimensions, Cardinal Parolin affirmed that“after thirty years, Mexico and the Holy See look together towards the future, sharing the same values ​​of peace, fraternity, social justice and respect for human rights”.

Within the framework of his visit to Mexico on the occasion of the 30th anniversary of the restoration of diplomatic relations between the Mexican State and the Holy See, Cardinal Pietro …

The Secretary of State, taking up the theme of the “positive secularism”pointed out that Christianity “is not just a worship that touches a person’s private sphere, but a faith that transforms the way we interact in life and in society”. Indeed, he recalled that over the centuries, the Gospel has inspired philosophy, politics, law or economics, and that Christian doctrine has contributed to the political and economic vision of today’s democratic societies with concepts such as liberation from all forms of slavery, the guarantee of social justice or the theological concept of the person and his sacredness.

Mutual recognition of one’s own role in society

“All these contributions show us that the Catholic Church is a valuable collaborator in the States where she exercises her pastoral activity for the promotion of social harmony and the search for the common good”, said Cardinal Parolin. He added that the “positive secularism” consists, according to him, in “to overcome the temptation of possible misunderstandings between the State and the Church by mutually recognizing the role and the values ​​that each is called to offer in society”.

In this context, the Vatican Cardinal also underlined the importance of religious freedom for the Church to fulfill its pastoral function. Referring to the statement Dignitatis humanae of the Second Vatican Council on religious freedom, Cardinal Parolin reaffirmed that the Catholic Church recognizes that religious freedom is a fundamental human right that derives from the dignity of the human person, from the deep nature of each human being, and protects therefore the necessary psychological freedom and freedom of conscience of each person.

“This implies that the human right to freedom of religion protects not only the rights of believers but also of non-believers to live freely, individually or in association, in private life or in the public sphere, according to their beliefs. on the ultimate meaning of life”, explained the Secretary of State. Furthermore, he echoed the words of Benedict XVI who, in his address to the United Nations General Assembly in 2008, said that “the full guarantee of religious freedom cannot be limited to the free exercise of worship, and that the public dimension of religion must be duly taken into consideration”.

In this context, Cardinal Parolin noted that the State and the Church must contribute to the promotion of society, of democratic values, and, to this end, must see the challenges of the future “not as a divisive occasion”but as an opportunity to work together, to “to give hope to those who are resigned to the logic of conflict, to those who cynically follow the pursuit of profit at all costs, to those who give themselves up in despair to the iniquitous methods of violence”.

The appearance of Guadalupe overcame the violence of the sword

After having approached the history of the origins of the Mexican nation and the process of colonization with its domination, its violence and its misunderstandings, Cardinal Parolin devoted a large place to the event of Guadalupe which introduced into the history of Mexico a different view, “founded on the love of freedom and the dignity of all”. He added that, as the Mexican bishops have said, “it was not the violence of the sword or the forced conversion, but the mysterious attraction of Mary of Guadalupe that led the two peoples and the two cultures, the Spaniards and the Indians, to a new way of understanding each other and relate to one another, based on faith in Jesus Christ”.

Even today, in Mexico, said the Secretary of State of the Holy See, the Church and the State are called to be an example for other countries, to show that it is possible to overcome extremism and polarizations, creating more and more a culture of fraternity, freedom, dialogue and solidarity. He concluded that thirty years after the re-establishment of diplomatic relations between Mexico and the Holy See, it is necessary to “looking to the future by opening new spaces for dialogue and institutional collaboration”.

Religious Freedom and the Common Good

Cardinal Aguiar Retes, Primate of Mexico, for his part, underlined the importance of the legal recognition of the Churches in Mexico to guarantee the religious freedom of Mexicans. “A nation that assumes and guarantees the rights of its citizens”did he declare, “is a great country, where each person can develop their abilities and collaborate in the construction of a fraternal society, the common good and social peace”.

The President of the Episcopate, Msgr. Cabrera López, particularly underlined that in the commitment made 30 years ago to respect and apply the law, “There is still a lot to do”. True religious freedom, he reiterated, cannot be limited to simple freedom of worship, but must allow everyone to practice and live their faith, to live according to their conscience, without ever violating the rights of others, but rather by contributing to the construction of a better society.