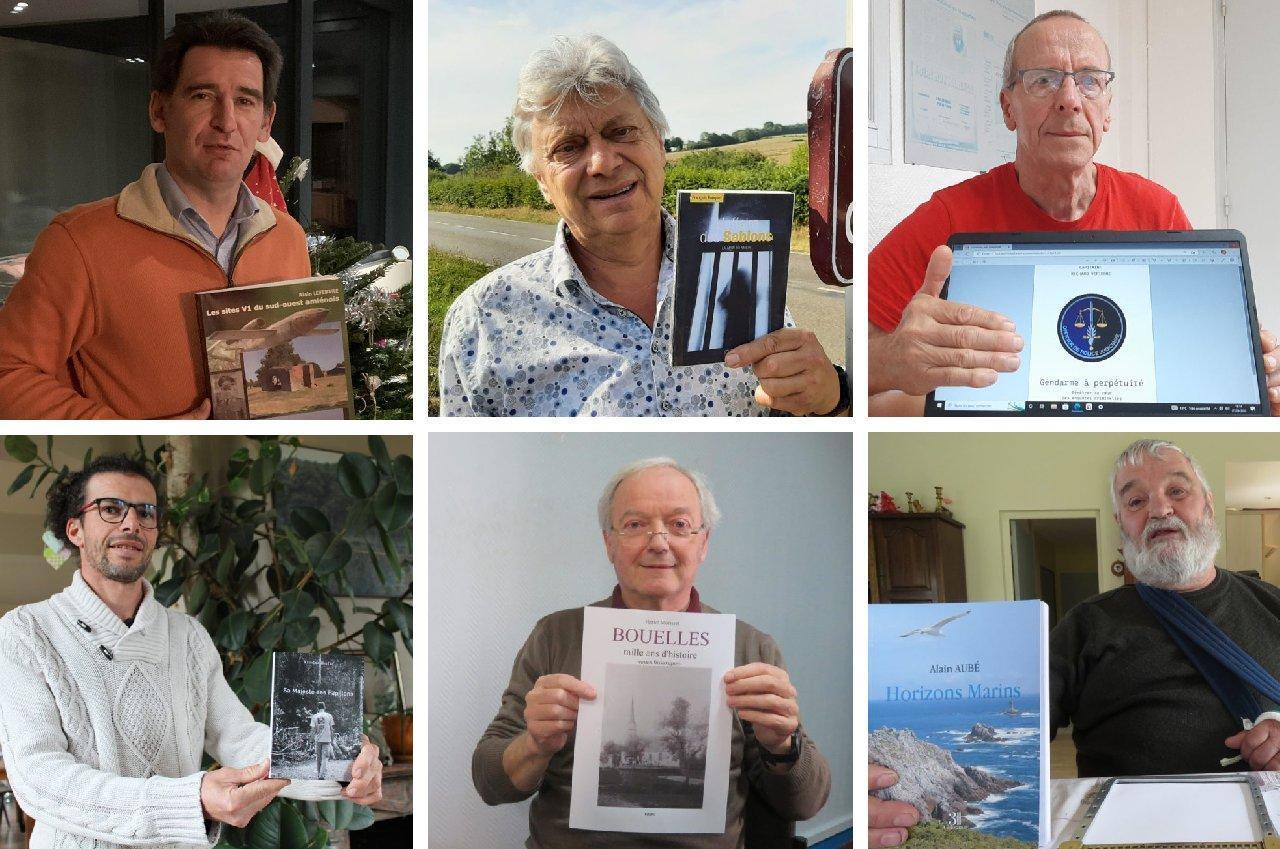 The Awakening of Neufchâtel
See my news

Several residents of Country of Bray and surroundings have taken up the pen in recent months. A variety of books have been published. Some refer to our territory, others are more general. Here is a selection especially in case of last minute gifts.

The Sablons Affair by François Fouquet

Francois Fouquet recently released a book on witchcraft. The writer of Neufchatel-en-Bray (Seine-Maritime)) tells the mysteries of the Sablons farm in Saint-Saire. A true story that dates from 1930. This news item comes back to the murder of the master of the Sablons, Pierre Bourdet, whom everyone called André.

It was his wife Gisèle who killed him with 5 shots while he slept in his room. But she denies the facts and denounces another much more obscure and unexpected culprit: the spirit of the evil one. In other words the devil would hover in the house. And not just any devil…

In this book, I decided to immediately give the name of the culprit.

And for good reason, the real culprit is elsewhere: witchcraft in Pays de Bray.

Her Majesty of the Butterflies by Nicolas Moulin

Insect Specialist, Nicholas Moulinan entomologist based in Montérolier, released his first book entitled Her Majesty of Butterflies. A book where he retraces the adventures of an expedition to the Central African Republic. From mid-November to mid-December 2019, Nicolas Moulin joins a French expedition made up of 20 people to learn more about Africa’s largest day butterfly: the Papilio antimachus.

If we know the males well, it is very rare to be able to observe the females.

For three weeks, they tried to observe the caterpillar and the chrysalis, but in vain. An expedition that the entomologist has decided to put down on paper.

From why we left for the Central African Republic to our mission, our journeys, adventures and misadventures… I retrace these weeks like no other.

Constable for life by Richard Vépierre

Richard Vepierre, retired gendarmerie captain, publishes his memoirs. 33 years of successful investigations and eternal doubts. The child from Osmoy-Saint-Valery tells his story. Richard Vépierre entered the gendarmerie at the age of 18 in 1971 with a “modest” BEPC in his pocket. But the young man has a destiny to write. It must be said that the teenager read the legal reports in Le Réveil. A vocation may have been born.

After his military service in the gendarmerie and for 33 years of career, he will multiply the investigations, rise in the hierarchy, come across sordid, funny, unusual, media stories… It is this journey in the heart of the brigades that he decided to put down on paper, supported by his publisher and friend, Jean-Louis Viot, himself a retired ex-cop near Dieppe.

But in his book, Richard mainly talks about his personal story. And if this book is called Gendarme in perpetuity, it is also to turn the page of this very special life. Richard intends to lift his life sentence by sharing his lifelong investigations with the public.

Bouelles, a thousand years of history by Hervé Morisset

Hervé Morissetclinical sociologist and passionate about history, recently published Bouelles, a thousand years of historye. His research on feudal mounds in Seine-Maritime led him to Bouelles, near Neufchâtel-en-Bray. “I particularly like the period of the Middle Ages, when villages appeared. I had not planned to write this book on the town because I wanted to write more generally on feudal mounds. After 3 days of visiting the woods of Cornemesnil and after my meeting with Gilles Cobert, mayor of Bouelles, I finally found the motte” explains Hervé Morisset.

And the author continues:

This interest of Mr. Cobert for the history of his commune made me want to write this book. I also managed to finish my book on the 273 feudal mounds of Seine-Maritime and the next will focus on the former Cistercian abbey of Bival, located in Nesle-Hodeng.

Alain Aube has been blind since the age of 12. At 16, he wrote his first poem and since then he hasn’t stopped. His granddaughter pushed him to publish his collections. Alain Aubé is from Grainville-la-Teinturière (Seine-Maritime). Two years ago, he moved with his partner to Ellecourt, near the place of residence of his daughter Aurélie: “We wanted to get closer to her”, confirms the Norman. And to add in a humorous tone:

Now I have to sell lots of books for this beautiful house.

Marine Horizons is the first book the recent writer has published. And the latter released in July 2021 is a collection of poems. However, he had no intention of being published. Initially, he only shared writings with his family or relatives for important events.

But his 19-year-old granddaughter, passionate about literature, pushes him towards publication. “I know you have lots of poems in your drawers. You could dictate them to me in order to make a brochure for the family, ”advises her granddaughter, Maeva Legrand. Every vacation, she goes to Ellecourt to transcribe the texts that her grandfather whispers to her. Which will give this book.

Alain Lefebvre’s V1 sites in the southwest of Amiens

The 20th book ofAlain Lefebvre is devoted to the V1 sites near Hornoy-le-Bourg. The author from Hornoy-le-Bourg has published a 560-page book to discuss these sites present in the Somme. The Germans used them to launch planes without pilots.

There are many documents with many aerial photos of the V1 sites listed in the south-west of the Somme. There are also reports of all the bombings of these sites. Some were shelled multiple times a day for weeks. It was rare for a site to be destroyed all at once.

The author found many of his documents in the English national archives, which are located in Kew, near London, and the American archives of the US Air Force.

Londinières in the Belle Époque by Denis Renaux and Daniel Fauvel

A deep dive into the past, that’s what the book offers you Londinières during the Belle Époque, released in recent months. It is dedicated to Londinières at the beginning of the 20th century. On more than 100 pages, you will find a large number of photos from the early 1900s from the collection of old postcards of Denis Renaux. With the help of the historian Daniel Fauvelthe two men were thus able to retrace the past of this town which, since the Middle Ages, has enjoyed an advantageous position in the Eaulne valley.

This era was the golden age of local traders and craftsmen. Very fashionable at that time, postcards offer 100 years later, the opportunity to evoke, not without a certain nostalgia, the past of the village.

Bray’s Buttonhole, Volume 4 of the SHPB

The Historical Society of the Pays de Bray Normand and Picard has released volume 4 of its series devoted to the Pays de Bray. Since 2011, the association has been carrying out works. Systematically municipalities in the Oise and Seine-Maritime areas are mentioned in these books.

This volume 4 pays tribute to those who maintain and restore Brayon’s heritage. There is the Gournay hen, the Domaine de Merval orchard, the Saint-Hildevert de Gournay collegiate church, the Pont de coq, the Hannaches castle and the Sainte-Radegonde site in Neufchâtel-en-Bray. But this volume 4 also evokes the Pénitents cheese dairy in Neufchâtel-en-Bray or research on metallurgy and hydraulics in the Pays de Bray.

Was this article helpful to you? Know that you can follow Le Réveil de Neufchâtel in space My News . In one click, after registration, you will find all the news of your favorite cities and brands.

Last-minute Christmas gifts: here are some books by authors from the Pays de Bray or a little further afield

5 things to know about Nosferatu celebrating its 100th anniversary | VL Media
Witch hunts in Scotland: after being hunted down and killed, the victims in the process of rehabilit...
Fnac wants to put an end to its stock of LEGO!
Tweet
Share
Share
Pin