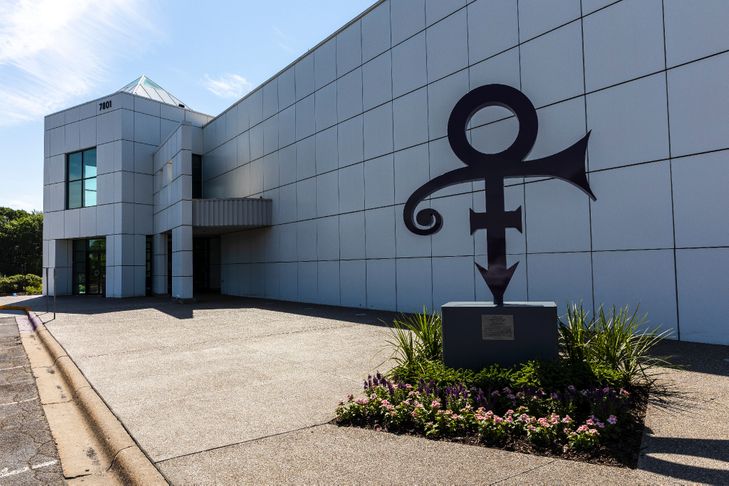 The “love symbol” erected as a statue, in front of the Paisley Park estate, former residence of Prince, on June 30, 2021 in Chanhassen, Minnesota / AFP

The large white building, in the suburbs of Minneapolis in the north of the United States, could make you think of an abandoned shopping center or an office building: welcome to Paisley Park, home and musical studio of Prince, now transformed into a museum.

Outside, only a large purple statue bearing the effigy of the “Love symbol” reminds the visitor that the premises, a complex of around 6,000 square meters, belonged to the artist who died five years ago.

Located just off a highway in the municipality of Chanhassen, Paisley Park served as the virtuoso’s home and creative garden. A sanctuary where he lived for almost three decades before collapsing in an elevator and dying soon after from an accidental overdose of painkillers.

Sunlight streams in through the glass pyramid that crowns the complex. Inside, white doves watch over the grand atrium painted with blue skies and fluffy clouds.

With four studios and a recording set, as well as a club, Paisley Park has hosted artists such as Madonna, Miles Davis and Patti LaBelle for years, also organizing concerts and impromptu shows. A place of pilgrimage even before the death of the artist, aged 57, the estate has today taken on a new life as a museum.

The “NPG Music Club” in Paisley Park, home and musical studio of Prince, now transformed into a museum, on June 30, 2021 in Chanhassen, Minnesota / AFP

Faced with heavy tax expenditures after Prince’s death, his heirs sought to monetize the premises. Six days a week, fans can enjoy guided tours that range in price from $45 to $160.

At the entrance, you must leave your mobile phone in a special pocket. Photos are prohibited in most of the domain, an attempt to conform to the wishes of the artist.

“Prince has always preferred that you experience things here in Paisley through your own eyes rather than with your camera,” said Mitch Maguire, the resort’s general manager, during an AFP tour.

According to him, “Prince really had a gift for creating a mystical aura”.

Hundreds of shoes made to measure for Prince, displayed in Paisley Park, the musician’s home and studio, transformed into a museum, on June 30, 2021 in Chanhassen, Minnesota / AFP

The rooms where the artist lived are totally off limits, as is the safe where he stored thousands of unreleased tracks.

The exhibition halls house memorabilia of the singer and composer, between gold records, “flashy” colored costumes, motorcycles and a purple room, a tribute to his flagship album “Purple Rain”.

The recording platform, designed for concerts and tour rehearsals, is now covered with a giant screen that broadcasts archives.

In another room, a special exhibition presents hundreds of shoes made to measure for Prince – high-heeled ankle boots, platform sneakers, roller skates – whose extravagance recalls the glamorous side of the artist.

Prince was a mainstay of the Minneapolis cultural scene. He regularly organized unannounced concerts in Paisley Park. And years before running the museum, Mitch Maguire was a fan in the crowd.

“I think the access we’ve had, as people in this community, to Prince’s genius, is unparalleled,” he says.

As for seeing it happen here, “I don’t think there are enough words in the dictionary to aptly explain it,” he continues.

Prince’s costumes and his guitar, on display at Paisley Park, the musician’s home and studio, now a museum, on June 30, 2021 in Chanhassen, Minnesota / AFP

Paisley Park continues to hold musical events and has also served as a recording studio for artists including Beck.

“Part of preserving Prince’s legacy is to continue to make this place a creative space,” adds Mitch Maguire.

In 1985, two years before the venue opened to the public, the song “Paisley Park” appeared on Prince’s seventh album, “Around The World In a Day”. He described a utopian community, both spiritual and concrete.

“Love is the color there,” sang Prince. “Entry is easy / Just say you believe in it”.