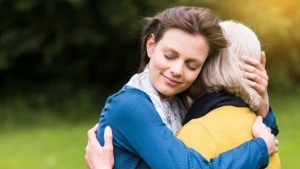 This is the communion of saints! United with the Passion of Jesus, the Christian can carry crosses that other people are not able to take on themselves.

All religions have been confronted with the mystery of suffering. Hinduism counts on the access to nirvana, at the end of the cycles of reincarnation, to free the individual from evil. Christianity has a different approach: Jesus came to take on our suffering to relieve his fellow human beings. However, in this struggle against all kinds of evil: physical, psychological, moral, spiritual, Christ did not want to be the only one to accomplish this mission. He counts on our support to assist him.

From the perspective of our collaboration in the work of Christ, the existence of Jesus raises questions for us: can we alleviate, for our part, the sufferings of our neighbor by carrying part of his burden on ourselves as he himself did? same ? Indeed, the Gospel affirms that Jesus “bears our infirmities and bears our diseases” (Mt 8.17). From my side, can I do the same? This supposes that I replace my neighbor by taking his place in such a way that I relieve him of his burden. Now, the Church has always answered in the affirmative to this question. Yes, it is possible for men to suffer to lessen the pain of others.

In this communion of saints, the first person takes the place of the second in order to lead a fight for which he is better equipped than she.

Let us take the example of a person who is exposed to temptations of impurity, either because these solicitations are repugnant to him or because they find in him a more favorable echo. Against these temptations, our person supports a voluntary, determined, painful and exhausting fight. However, what she does not know is that, by means of this struggle, she is relieving the pain of another person who is herself a prisoner of sex, whether this addiction is of her direct responsibility or not. In this communion of saints, the first person takes the place of the second in order to lead a fight for which he is better equipped than she.

Jesus, the first, replaced us

One day, Saint Vincent de Paul took upon himself the doubts (of faith) of a Christian of his acquaintance: she recovered her faith while he was assailed for a time by temptations of unbelief! This example demonstrates that we can carry each other’s burdens by taking their place. In the Dialogues of the Carmelites (1947), Bernanos describes the terrible agony of the prioress of the Carmel of Compiègne. However, this ultimate test will prove to be the condition of the courage with which a young postulant, Blanche, very impressionable at the time of the death of the prioress, will climb the scaffold a few years later, in 1794, at the end of the Terror. . This is how the old nun will have taken upon herself the anguish of death in order to deliver the young martyr from it in anticipation.

It is therefore possible to take on oneself the pains of our neighbor and the best way to achieve this is to be grafted onto the Cross of Jesus. For it was he who took upon himself, in his body, the burden of our sins to take them away (1P 2.24). Jesus is the first to replace all of humanity in their misfortune. Also, by grafting ourselves onto his virtue of infinite charity, we will manage, in turn, to bear certain sufferings to relieve a brother or sister who is unable to do so. It is contraindicated to ask God for heavy crosses: those that fall on us unexpectedly are more than enough for our sanctification! On the other hand, it is not forbidden to ask Jesus for the grace to carry the crosses of our brothers. The mystery of substitution by which Jesus bore our sorrows continues through us. If suffering is never desirable in itself, on the other hand knowing the reason for which one suffers already constitutes a consolation. It is that which is promised to those who, united to the Passion of Christ, help their brothers to carry their crosses.

Can we take upon ourselves the pain of our neighbor?