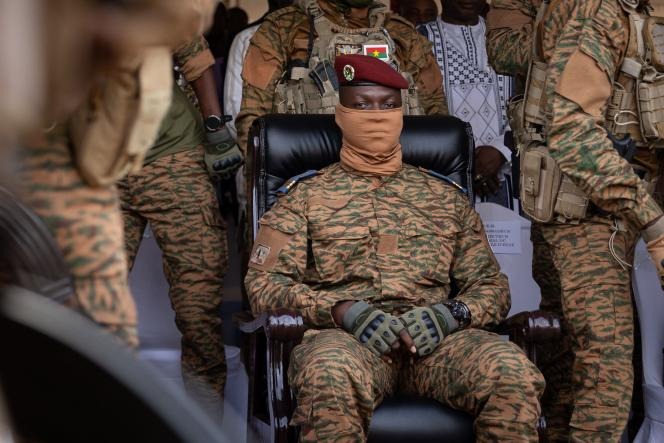 The final act of the coup was dispatched on the sly. Friday, October 21, Captain Ibrahim Traoré, instigator of the putsch which overthrew Lieutenant-Colonel Paul-Henri Damiba on September 30, was sworn in as President of Burkina Faso by the Constitutional Council, in front of a few dozen guests. No diplomat or journalist was invited to this ceremony – which the presidency wanted ” sober ” – consecrating the installation of the 34-year-old captain in the chair of president until the organization of elections scheduled for July 2024.

The national assizes during which the putschist was appointed president on October 14 had also turned into a mere formality. Organized only two weeks after he took power, they brought together some 350 members of the “living forces of the nation”, who had three hours to read the new transition charter, discuss it and validate it by unanimous acclamation. A haste that reflects the young captain’s desire to quickly establish a power that remains fragile.

Nearly half of the participants (trade unionists, political, security, customary and religious leaders) belonged either to the defense and security forces or to the Patriotic Movement for Safeguarding and Restoration, the governing body of the junta. At the end of this meeting, which was held behind closed doors, Ibrahim Traoré himself signed the act confirming his appointment.

In the days following his putsch, the captain had nevertheless shown himself to be more reluctant to the idea of ​​retaining power after the assizes. “Why continue? We did not come to continue”, he assured in an interview with Radio France International, the 3rd of October.

Confirm the “backing” of the street

For now, the political career of the one that Burkinabés already call “IB” is the subject of debate. Some security sources depict a soldier who has long been driven by the desire to take power, and who, moreover, has already taken part in the coup against President Roch Marc Christian Kaboré alongside Lieutenant-Colonel Damiba in January.

Others believe that he was actually forced to retain power to ensure his own security. During the September 30 putsch, the pro-Traoré and pro-Damiba camps came close to confrontation, a sign that the captain “does not have a free hand in the armyunderlines Mathieu Pellerin, analyst within the International Crisis Group. Even if the military hierarchy ended up assuring him of its support, relations are still not good with a certain number of senior officers. Letting go of power also meant perhaps exposing himself to the risk that these men would make him pay for his putsch. »

To ensure his footing, the soldier from the province of Boucle du Mouhoun, in the north-west of the country, is trying to build popular legitimacy. During the coup, already, Ibrahim Traoré had ” found with the street the support he lacked within the troops to overthrow Damiba”, explains Mr. Pellerin. 1er October, the captain had lifted the curfew introduced the day before and invited by press release “the valiant people of Burkina Faso have a patriotic vigil, a total and constant mobilization to oppose the obscurantist forces”.

On the same day, one of his statements read on state television, indicating that “Lieutenant-Colonel Paul-Henri Damiba would have taken refuge within the French base in Kamboinsin, able to plan a counter-offensive”, and emphasizing its “firm desire to reach out to other partners ready to help in the fight against terrorism “, had convinced the demonstrators to take to the streets of Ouagadougou, where resentment against the French presence has been growing for months. Hundreds of Burkinabés, some with a Russian flag in their hands, then showed their support for Captain Traoré. Some had attacked signs of the French presence, in particular the embassy.

“This communication was made on purpose. They [les putschistes] used keywords, themes to which the people are sensitive, to encourage young people to support them », emphasizes Serge Bayala, civil society activist and member of the Citizen’s Broom, an association which was at the forefront of the demonstrations that led to the fall of President Blaise Compaoré during the popular uprising of 2014.

Among these watchwords was the eternal reference to the former revolutionary president Thomas Sankara, pan-African icon assassinated with the complicity of ex-president Blaise Compaoré in 1987, adored by Burkinabés, but often taken over by political leaders. In the speeches made by Ibrahim Traoré since taking power, there are many references to the nationalist ideals of the “African Che Guevara”.

His first official visit was dedicated to him. On October 15, the young putschist went to the Thomas-Sankara memorial in Ouagadougou and received a “torch of the revolution”. A strong symbolic act, supposed to illustrate the will of the new Head of State to continue “the implementation of the Sankara ideal”according to the presidency.

The discreet “IB” had not spoken that day, his face still hidden by his choker, but he was cheered by the crowd. His age (34), his rank of captain, like Sankara during his putsch, and his first speeches imbued with revolutionary references were enough for some young people to see in him a “Reincarnation of Sankara”.

Read also: Burkina Faso, maps to understand the reasons for the last putsch

For Serge Bayala, this tribute paid is “a good sign” sent by the new president, but the activist is not fooled: “Sankara has become a political gimmick that works in anyone’s mouth. Strongly that all this tralala of coup d’etat is closed so that one sees if, in its policy, there is a content behind the elements of language. »

Like most Burkinabés, the activist is above all waiting for the reason put forward to justify this coup d’etat – the lack of results of his predecessor in the fight against terrorism – to materialize. Although a special recruitment of 3,000 soldiers was announced on October 17, the security situation continues to deteriorate.

On October 15, at least three soldiers and eight civilian army auxiliaries were killed in a suspected jihadist attack in Bouroum, in the north of the country, raising the death toll to more than 3,350 since the beginning of the year, according to the NGO Armed Conflict Location and Event Data Project. A hundred kilometers away, in Djibo, a city under jihadist blockade for more than seven months, some 300,000 people trapped continue to be hungry.

Read also: Article reserved for our subscribers Burkina Faso: in Djibo, a life under a jihadist blockade

“It is not enough to take power (…) You have come to raise the bar, know that you have an obligation of result”, warned Bouraïma Cissé, interim president of the Constitutional Council, facing the putschist who became president, on October 21. “For my nation, I will fight to the last breath”retorted the captain, before inviting the security forces to “shut up some quarrels, because the enemy opposite is much more united”.

Burkina Faso: after his putsch, Captain Traoré dreams of being a new Sankara