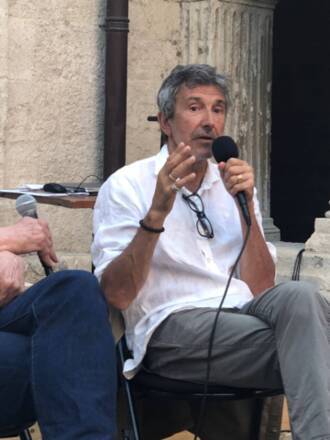 To translate an author is to be as close as possible to his words, to his breath. So much so that once this adventure is over, you sometimes want nothing more than to prolong it. This is precisely the party chosen by the writer and translator Christian Garcin, whose proposal – to read a selection of the love poems of the American EE Cummings (1894-1962), one of the most daring modernist poets of his time , in the majestic and austere setting of Montmajour Abbeyfounded in the 10th century near Arles – was selected by Mondes nouvelles.

This reading, with the air of a real performance, even of a mystical experience, so much Christian Garcin seemed inhabited by the poetry of Cummings, took place on June 13th. Montmajour Abbey was much more than just a setting, it was part of the performance. “ It seemed to me that such a place, of austere beauty, having over the centuries been the setting for many mystical experiences, could ideally correspond to the undeniable mystical love that Cummings declines in each of his poems. », emphasizes the author, whom we interviewed a few weeks before the reading-performance.

What is the project around the poetry of EE Cummings that you are going to present?

The year 2022 marks the sixtieth anniversary of the death of American poet EE Cummings (Edward Estlin Cummings). His poetry, both lyrical and complex, playful and demanding, often disconcerting, absolutely unique in its treatment of syntax, typography, and the internal organization of poems, is one of the most striking, surprising and most exciting of the 20th century. Of all the themes she addresses, love is one of the most frequent. This is a selection of love poems covering the entire work, Tulips and chimneys (1925) to And so on (posthumous, 1973). I will read about forty of them, out of the approximately one hundred and eighty that I have translated.

How was the choice of the Abbaye de Montmajour made? Was it a place you wanted from the start? Did the proposal come from the Center des Monuments Nationaux?

Cummings’ poems draw a steep, powerful and singular mental landscape, a sort of arid and luminous end of the world, intensely inhabited, the equivalent of which it seemed to me could be an austere and bare monument, in an Arcadian landscape – a monastery , or an abbey. Initially, I had chosen the Cistercian abbey of Le Thoronet, closer to my home. But there were logistical problems, which meant that the Center des Monuments Nationaux offered me Montmajour, which suited me perfectly. Choosing such an abbey as a place for the restitution of love poems could at first sight seem paradoxical, but it seemed to me that on the contrary such a place, of austere beauty, having over the centuries been the setting for many mystical experiences, could ideally correspond to the undeniable amorous mysticism that Cummings declines in each of his poems.

A steep, powerful and singular mental landscape, a kind of arid and luminous end of the world, intensely inhabited

How did the “New Worlds” program appeal to you? What opportunity did he give you?

The device associating my work with an abbey such as Montmajour seduced me from the start for the reasons that I have just explained, and by the freedom that it allowed. I also wanted to propose, which would follow the reading, a conference by an emeritus translator of Cummings, Thierry Gillybœuf – which will not be a conference in truth but a discussion between him and me, moderated by Brice Matthieussent, who also translated a collection of poems by Cummings. We will therefore be three translators who will discuss this remarkable work together.

How do you perceive this place with regard to the personality and the work of EE Cummings, would you say that it is the “perfect” place?

I cannot answer this question precisely, because all in all a museum, rather of contemporary art – Cummings was also a painter – or a simple room, or a meadow – several poems associate love and birds, nature and joy of being in the world – could also be appropriate. I don’t know what he himself would have thought of this association either. But the undeniably amorous mystique, sometimes suggestive, other times clearly erotic and carnal, present in some of these poems, seems to me to suit the place perfectly. For example, there are two poems, which I will read, separated by thirty years, and both resonating in an obvious way with the Song of Songs, the superb biblical love song attributed to King Solomon, from which I will also read short extracts. In addition, the cloister combines the solemnity of contemplation and the lightness of an open space, which can accommodate plants and birds, two dimensions present in Cummings’ poetry. No place can be “perfect”, but I have no doubt that Cummings’ poetry will perfectly invest this one.