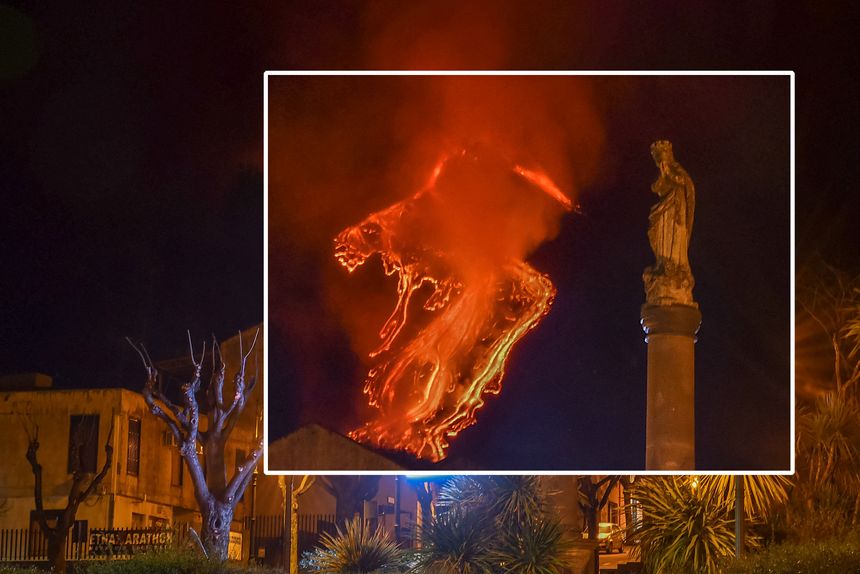 Lava lights up the night, in the town of Milo, in the Catania region of Sicily. On February 21, the Etna volcano, 3,300 meters high, was immortalized in eruption by a photographer from the Italian agency Ansa whose name we do not know. In the dark night, the lava seems to consume this house.

“This photograph is not immediately understandable. At first I thought it was a fire”recognizes Caroline d’Avout, deputy head of the photo department of echoes.

For her, photography is distinctly separated in two:

There is the bottom of the image with the city which stands out well, the roofs, the palm trees, the lampposts… And then this black background with this glowing spot which seems to be placed above the house.

On the second reading, the 300-meter-high volcano appears: “We see that the summit is almost drawn thanks to the lava.“ The “Etna marathon” banner, at the bottom left of the photo, also gives a clue.

Wrath of the gods

The strength of this shot is based on the duality between the statue and the volcano.

I think the photographer built his composition around this column, this religious statue. The Saint is at the same level as the summit of the volcano.

“It’s quite astonishing and captivating, disturbing too. And it gives a mystical impression; one wonders if it is the wrath of the gods, if the city will be engulfed in the following minutes.“ This choice of perspective brings a dramatic dimension to the image.

Homes were spared from the eruptions. Only Catania airport, the nearest city, was closed as a precaution. In 2018, an eruption caused an earthquake. A dozen people were injured, and several hundred displaced.

This photograph is taken at an unusual distance. “There are many photos taken from the top. It’s very impressive, but these shots are detached from the city. Or there are overviews, which encompass the city but from afar”, continues Caroline d’Avout.

On the contrary, “with this composition, we see that the city is still fragile next to such a natural element. This refers to the fragility of cities in general, and of people”. It evokes a city “asleep” in the tranquility of the night, facing a wide-awake volcano.

Mystical influence or not, Etna remains unpredictable. After the first paroxysmal episode, on February 16, scientists from the Italian Institute of Geophysics and Vulcanology initially referred to the precision “of a Swiss watch”. For three days, the paroxysms occurred about thirty hours apart.

However, this February 20, 2021, researchers say that the volcano is long overdue. He “changes pace and upsets beliefs”, note the researchers, left for observation as close as possible to the summit. Expected in the afternoon, the paroxysm finally took place at dusk. The volcano finally subsided on February 24, after a few days.


Etna, 550,000 years old, is still more or less active, between periods of rest and eruption. The most important eruption took place in 1669 with a fissure 12 kilometers long and 2 meters wide. The lava engulfed several villages. The longest eruption occurred between 1991 and 1993. It lasted more than a year.

More than 900,000 Sicilians live at the foot of Etna. The city of Catania was repeatedly ravaged. For its part, Randazzo is nicknamed “the Miraculous”, the lava having stopped at the foot of the village in 1981. The inhabitants have become accustomed to living with this volcanic activity. A habit captured by this photograph.

Etna in eruption: mystical fury in the Sicilian night