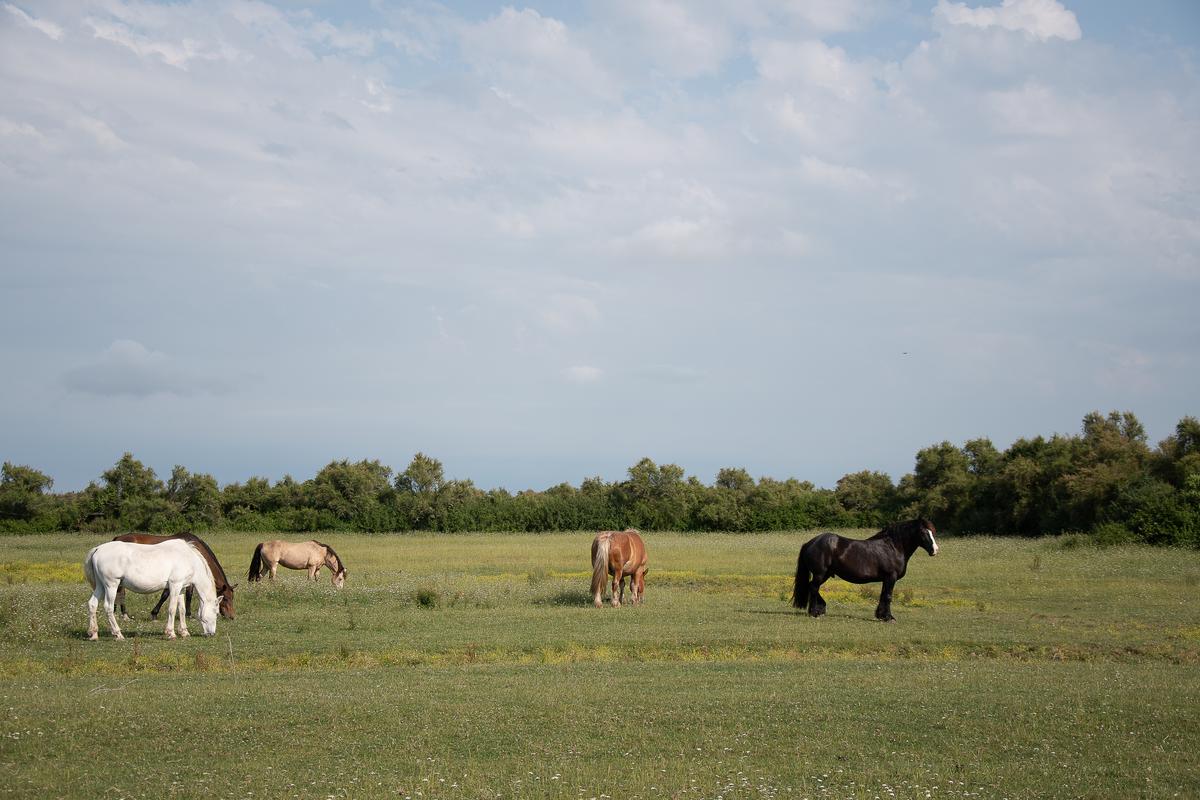 Protected from the estuary by a dyke, these rich lands, the “mattes”, are now used to grow cereals for the cows and horses that graze nearby.

Mattes, palus and marshes, whose different environments make it possible to feed animals as well as men, shape the landscapes here. The north of the Médoc peninsula is therefore not lacking in resources, however unexpected they may be. On the banks of the brackish channels, a multitude of edible wild plants flourishes.

Obione, glasswort, aster and maritime sagebrush complement the tasty recipes of Laurence Dessimouliewho, during animated walks with the Permanent Center for Initiation to the Environment (CPIE Medoc)teaches visitors to identify them in order to use them.

In the basins where salt was once collected, prawns and oysters now coexist. The oyster refiner Thierry Fauchier is thus established at the end of the Baluard marsh, where he works as a family with his wife and son.

Unlike the five other affineurs in the sector, he is the only one to raise his own oysters in the Arcachon basin, which he then transfers to his claires, where they spend six months. There is a good reason for this: they develop faster there, which makes them fleshier and softer. Because, if it was still possible, until the 1980s, to raise oysters in the estuary, which then provided a third of the spat needs of French oyster farming, this is no longer the case today. .

We settle down with family or friends around wooden tables with a view of the estuary, while grilling meat and fish on the permanently installed barbecues.

In addition to the attraction of oysters, the locals also appreciate this little corner of marshes for picnics. We settle down with family or friends around the wooden tables with a view of the estuary, while grilling meat and fish on the permanently installed barbecues.

From there, just get on your bike to reach the old oyster port of Talais by the cycle path, on the channel, and its pretty white and blue huts built by the fishermen. Faced with the tranquility of the place, it is difficult to imagine that it experienced strong activity until the 1970s.

A stone’s throw away, the port of Saint-Vivien, with its less polished decor, is lined with guinguettes. La Petite Canau, Philippe Lucet’s aquaculture farm, is lost in the middle of the marshes. This does not prevent it from filling up from July 15 to the end of September, when people flock there to taste prawns prepared in many ways. Few specimens per square meter, no treatments, everything would be fine if the Ruppia maritima, an aquatic weed that invades the clear, did not force him to reduce his production of crustaceans.

A little further on, Joël Villeneuve has taken over his parents’ farm to cultivate spirulina, a cyanobacterium similar to algae, on 670 square meters. For the past five years, he has been harvesting 500 kg a year, which he dries to market in the form of flakes, on site or at the market held on Wednesday mornings at the foot of the church of Saint-Vivien-de- Médoc, a landmark of local producers. “Rich in vitamins and iron, it is full of benefits and can be eaten alone at the rate of a teaspoon a day, but also sprinkled in many dishes”, advises Joël Villeneuve.

In Jau-Dignac-et-Loirac, where the estuary is almost the widest, the Richard lighthouse, built in 1843 and rehabilitated in the 1990s, still houses the caretaker’s house as well as a small museum on life estuary. Once the 63 steps have been climbed, the Gironde extends on one side, marshes, pastures and vineyards on the other.

In the net, we indulge in meditation and contemplation of the river, while lazily raising the net in which a few catches are wriggling.

But to be able to observe the largest estuary in Europe at leisure, nothing better than plaice. The typical huts on stilts of the Atlantic coast mark out the dyke. There are nearly 1,000 of them, about half of them on the Gironde estuary alone.

By visiting the one managed by the Association communale du Phare de Richard, the “neo-Médocain” learns, among other things, that the term “carrelet” applies both to the cabin and to the narrow-mesh square net stretched over a frame. 4 × 4 meters. A place of relaxation and conviviality, one indulges in meditation and contemplation of the river, while lazily lifting the net in which a few catches are wriggling. Fishing is not necessarily an end in itself.

Gradually, the meadows give way to vines, which thrive on these sandy-gravelly soils. Here, there are no large prestigious estates but small family properties or wine farms like that of the Cecchini, where the winemaker is alone to carry out a multitude of tasks.

This is what gave Judith the idea of ​​organizing a “wine tour”. Embark in her 1975 Volkswagen combi, discovering several estates, where she introduces you to tasting thanks to the play of aromas and explains the work of the vineyard and the cellar. An initiative that aims as much to enhance as to allow you to explore this still wild territory in a different way.

LMedoc Atlantique tourist office organizes many thematic walks in the area and provides (on site or downloadable) free guidebooks detailing several circuits in the marshes. The CPIE also offers a program of activities and discoveries (curuma-cpiemedoc.jimdofree.com).

Prawns by Philippe Lucet. At noon, cold formulas, prawns, oysters and a glass of wine €17. In the evening, “hot” formulas with flambéed prawns, between €22 and €30. At the farm La Petite Canau, at the port of Saint-Vivien.

The Kayak Cafe. This guinguette combines business with pleasure. Not only can you savor oysters, prawns (those from the Petite Canau), homemade tuna rillettes with spirulina or Charentaise mussels, but you can also rent a kayak to stroll on the channel as calm as a lake (departure after the lock). The icing on the cake, if you have lunch there, the kayak rental is half price (i.e. 5 € instead of 10 €). Dishes from €10 to €18. 16 bis, route du Port, at the port of Saint-Vivien. www.kayak-et-decouvertes.blogspot.com

The Flower with the Rifle. More sophisticated, the cuisine of Marion Metenier, in the town of Saint-Vivien-de-Médoc, showcases local products, such as Vietnamese-style grilled Médoc oysters or confit and snacked beef chuck, with inspiration from Besides. His signature dishes, smoked haddock and lasagna sheets and, for dessert, cabbage cracker are available in multiple variations. Appetizers €12-15, mains €25.50-€33, desserts €10. From Tuesday to Friday lunch menu at €28.50. 8, Cours Georges-Mandel in Saint-Vivien-de-Médoc, tel. 05 56 09 98 11.

The Clos of the Peninsula. It has been nine years since Joëlle and Didier Thielen set up four guest rooms in their house (including a family one). A haven of tranquility, 500 meters from the town of Saint-Vivien, with billiards, jacuzzi and sauna. They share their secret corners and good addresses. Take advantage of it quickly, they plan to retire in 2024. From 70 to 130 € per room for four. 12, rue du Haras, in Saint-Vivien-de-Médoc, tel. 05 56 09 46 87. www.leclosdelapresquile.fr

TO VISIT, TO DO

Richard’s Lighthouse. An incredible 360 ​​degree view of the estuary. The visit to the museum includes that of the educational carrelet. Instructive. In Jau-Dignac-et-Loirac. €2.50. Such. 05 56 09 52 39. www.phare-richard.com

Tourism in Gironde: contemplative and gourmet walk in the Médoc polders