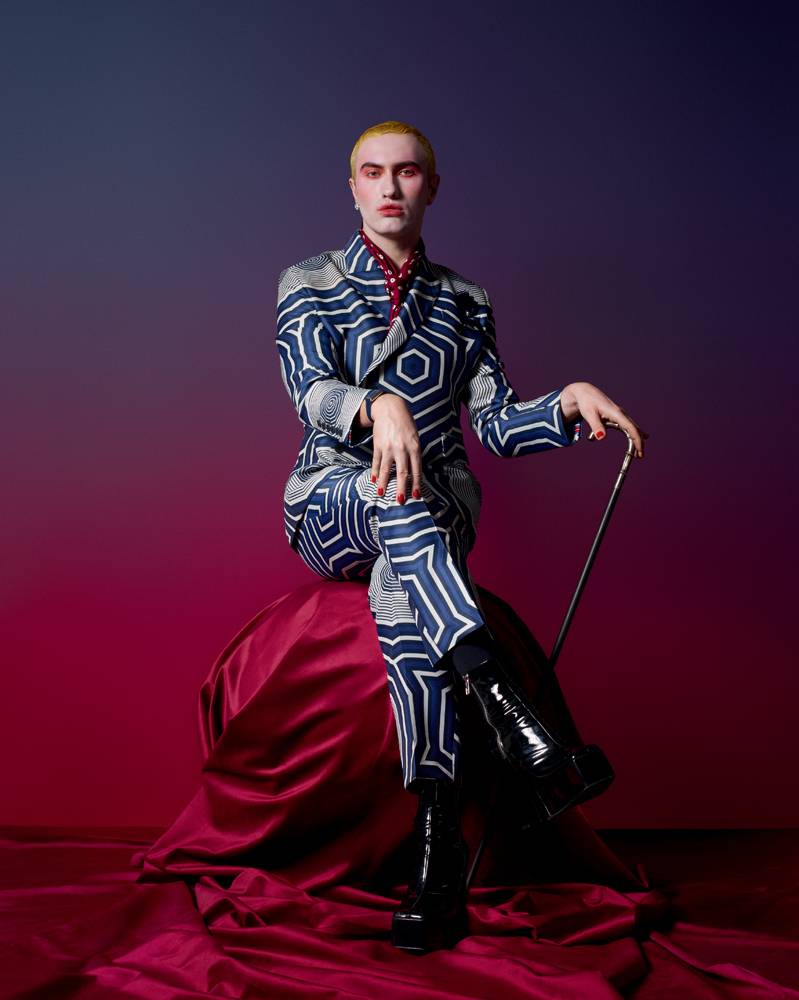 While waiting for our transformation into avatars in the metaverse, Numéro Homme paints portraits of very real faces: those of the fine flower of young men’s fashion designers. Gathered in Paris in front of the lens of Erwan Frotin, these designers of the future wear pieces from their own wardrobes and reveal to us the inspirations, paths, reflections and innovative commitments that underlie their success. Focus on the designer of Scottish origin Charles Jeffrey, whose eponymous label pays homage to the mythology of London queer nights and to his own culture, in a political commitment for the rights of the LGBTQI community.

Born in Scotland in 1990, Charles Jeffrey has always been drawn to art, fashion and drawing. When he moved to London, at the age of 18, it was to study creation there, to sharpen his eye and his aesthetics. With success, it seems, because his graduation parade has long marked the spirits. We are in 2015, and the young man is then about to graduate from Central Saint Martins, where he was able to benefit from the wise advice of Professor Louise Wilson. She is the one who notably trained Alexander McQueen or Christopher Kane. On the improvised podium in the center of the school hall, we then discover silhouettes with radically redesigned proportions: short knits, pleated trousers and very high waists, loose suits worn next to the skin… The willingly bare skin dialogues with very colorful arty prints. Baptized “Charles Jeffrey Loverboy”, his label was launched in the wake of this first promising show. If he does not like being compared to John Galliano or Alexander McQueen, there is nevertheless, in the theatricality and the grandiloquence of his collections, something of this order. His influence? The London queer scene of the 80s and its icons such as artists Leigh Bowery or Boy George, whose flamboyance made the nights of the capital an endless party. “Nightlife has completely changed my way of thinking, of seeing things, it has shaped me! Club life is a kind of meditation for me, it’s where I feel the most human, the most alive, the most connected to my peers.”, he confided to the English magazine The Face, in October 2021.

If he celebrates, through his dressing room, the world of the night, he does not neglect his origins. In fact, in his collections, he mixes a traditional aesthetic articulated around unstructured kilts or revisited tartans, to which are added outrageous make-up, dramatic drapes and volumes, as well as obviously excessive heels. His extravagant and colorful assemblies also sometimes evoke the universe of the cult Japanese brand Comme des Garçons. Charles Jeffrey won the 2017 British Fashion Awards Emerging Young Talent award. A recognition of the sector which gives it growing visibility. Very involved with the LGBTQI community, in 2018 he signed a collection with the giant of the fast fashion English company Topshop, whose profits were donated to associations defending the rights of homosexuals. Its Spring-Summer 2022 collection is inspired by the esoteric performances of tribes and other shamans. “Folklore is invariably at the heart of my work. It’s something that has always interested me. I try to reproduce its symbolism in my own way, in particular by using the warrior signs of the Picts, these ancient tribes of the Highlands, in jacquard costumes, for example“, he explained to the Women’s Wear Daily, in September 2021. Also a sculptor and visual artist, Charles Jeffrey regularly exhibits his abstract and oversized works in London galleries.

Charles Jeffrey, the creator who explores the madness of London’s queer nightlife


Explore our social media profiles and other related pageshttps://nimblespirit.com/related-pages/