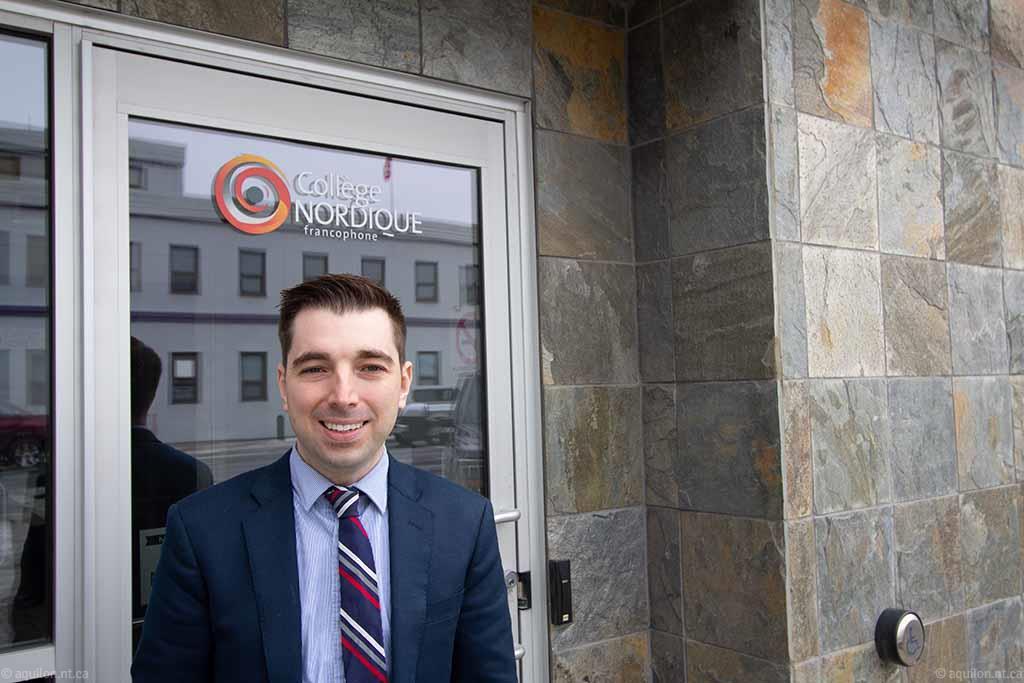 With ten years of experience across Canada, Patrick Arsenault, new director general of the Nordic College, is preparing to take up the challenge, this time in the NWT. (Courtesy PA)

Freshly arrived in Yellowknife, Patrick Arsenault took charge of the Collège nordique francophone, which is preparing to take its place within a booming post-secondary education system in the Northwest Territories.

Patrick Arsenault discovers Yellowknife at a pivotal moment in the history of the Collège nordique francophone, which is preparing for the imminent coming into force of the new law on post-secondary education in the NWT. Taking office on May 9, and already well aware of the work to be done, the new general manager’s first mission is to leave the premises on 49th Street and strengthen the establishment’s ties with the Francophonie in the region.

Barely moved in, Patrick Arsenault appropriates the files of his predecessor with aplomb, with particular emphasis on his new adopted community. “I will have to make sure first and foremost that we can put forward all our great projects by trying to obtain more support from the community, in general, from its people and its students,” he says. I want us to be more present in general. This is one of the main objectives that I have given myself for the next few months. »

The college has been working for several years to expand its offer, placing the French language as a point of contact between the multiple cultures that make up the territory. For example, it is possible to take Tli?cho language courses there and, more recently, immigrants have had access to the language knowledge tests necessary to obtain citizenship, a step that until then required traveling to Saskatchewan.

Josée Clermont, CEO from 2014 to 2022, bequeaths great ambitions to her successor. The institution is preparing to officially join the NWT post-secondary education system, and to take its place within the future polytechnic university. “I expect the college to be officially recognized as a French-language postsecondary institution,” she predicted to Médias ténois, just Before his departurein January 2022.

The new director sees this as a mission of great importance for the very future of the Francophonie in the region. “I believe that the Collège nordique francophone will have the power to keep young people in the NWT. They will be able to take courses that are truly rooted in our community, useful for jobs here. We will help retain our residents, and even attract people from outside, Francophones or bilinguals, looking for a stimulating career and this incredible living environment. »

The college’s post-secondary era begins in September with a new Children’s service, offered in partnership with La Cité College in Ottawa. Autumn could also hold other novelties in store for us. “We are currently exploring options to expand our post-secondary course offerings. Over the next few months and weeks, we will see to offering other programs, in partnership with La Cité or with other establishments,” shares the director.

In terms of attraction and retention, the executive director also wishes to develop the service offer to the immigrant population, being himself a Canadian immigration regulatory advisor – one of the many strings to his bow. “I have been working with immigrant populations in several Canadian provinces for several years now, and I will be very interested in seeing how we can expand our offer in terms of immigration,” he says.

“We already offer language tests to support residents in their immigration process, but I think we could work even more with other organizations to help people acquire vocabulary specific to their profession, for example, underlines- he. We could try to offer more specialized courses, related to certain industries or certain key areas in the Northwest Territories. »

Francophone in a minority context

Before getting off the plane on May 8 – two days before his discussion with Tnois Media – Patrick Arsenault had never visited the Canadian North. On the other hand, French in a minority context is nothing new for someone who has accumulated ten years of teaching experience outside Quebec, from Ontario to Newfoundland and Labrador, with a few stops in foreign.

Mr. Arsenault was until recently director of the Consortium Avantage Ontario, which brings together eleven francophone post-secondary institutions in the province. “One of the common threads that have brought me here is the work in minority Francophone communities,” he says. I have also always bathed in the secondary environment. I saw that I could make a difference in the NWT with the experience and expertise I gained. »

“We can certainly learn from the other organizations around us,” he insists when talking about his new mandate in the northern provinces. I do not want to duplicate the services or initiatives of others. I want to see how we can fit into contexts that already exist, understand how we can carry out new projects with partners who are evolving within the community. »

“One of the priorities will therefore be to regain our place within the community,” emphasizes Patrick Arsenault. I would like us to be more present in the NWT, for people to think of us when they need training, and for us to really be part of the support ecosystem for the Francophone population here. This will involve rebuilding ties with community organizations and key stakeholders. »

Patrick Arsenault at the helm of the French-speaking Nordic College