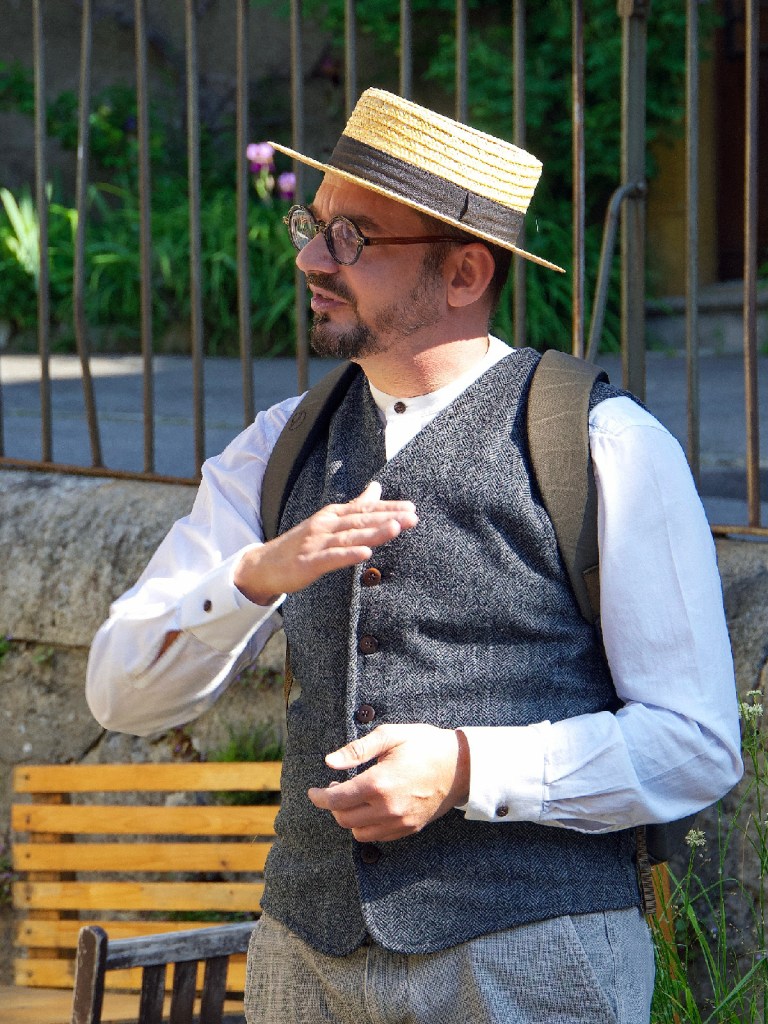 This is how the syndic of this village could have expressed himself at the beginning of the 16th century. This is also how Fabrice De Icco could have started his presentation this Saturday morning on the Place du Bourg de Romainmôtier. In any case, it was through the development company that organized the event that the current prefect and former trustee of the place took the floor to present the results of his research on the place said in the title of the article. He did not hide that this study had started with Yann Dahhoui in 1995, a friendship which guided them in a long term work. From the age of 17 or 18, they carried out research on this village which was once an important neighbor of the town at the time.

So much for the framework of these 4 or 5 hours during which it must be admitted that Fabrice gave free rein to his passion for history. Historian by profession, he took with him about thirty curious people, almost all of them from the valley, in an open-air presentation full of anecdotes, revelations and details awakening interest in the history of the two localities. Here are some examples among others: the first evocation of Lanfrey is dated 1272. At that time and until the beginning of the 16th century, the village played a significant role in the economic activities of the valley. It was said that it is the village of Premier would have been at the origin of that of Lanfrey whereas in fact it was former to that of Premiolets. There are even traces of the Lanfrey family which was a great French family and which was at the origin of that of the Monods. In 1571, during a census carried out by Bern, there is already no longer any mention of the village; it seems then that there was an element which precipitated its disappearance: the plague, the lack of water, but perhaps especially the disappearance of services which would have attracted the inhabitants little by little towards the borough. For the latter, it was also said that another church was on the current Place des Marronniers and that a cemetery surrounded it. The thing thus testified to the existence of two distinct parishes and localities. After its demolition, a game of skittles brought together the people of the town and a bistro opened on the square. We also learned that the Fochau housed a leper colony; the name of the place comes from “ditch” which evokes a pit where the dead were deposited. A legend even speaks of a treasure, of a dead person who disappeared during a funeral, of witchcraft and other tasty elements that the narrator of the day, not sparing with details, has delivered to us in abundance.

Then the small troop moved off to head towards the shooting range, slipped to the right of this place to take a steep path which was none other than the one which linked the Vallée de Joux to Croy before the cantonal road was built in the middle of the 19th century. It was then that we came to a vast clearing where it is supposed that Lanfrey was located.

The moment ended in a happy picnic on the spot and to the rhythm of questions and answers that the curiosity of the participants and the knowledge of the storyteller brought.

Fabrice, from the start, had warned us that many unknowns remained about Lanfrey and that it could be frustrating. But it turned out that all the assumptions expressed about the village and the information about the town only served to heighten the interest and the imagination of the people present as well as the desire to know more about it. history of their community. Long live the memory of Lanfrey.

Lanfrey, where is it? People of Lanfrey, our village is in danger! – The Omnibus