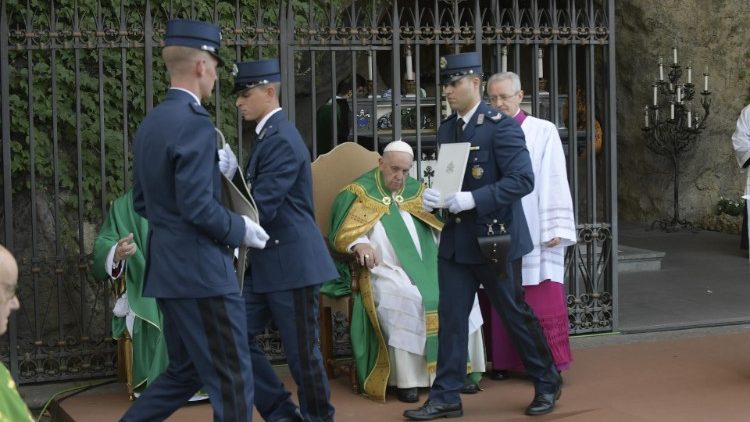 Francis celebrated Saturday afternoon Mass in the Grotto of Lourdes in the Vatican Gardens for the Corps of Gendarmerie, on the occasion of the birthday of the patron saint, Saint Michael the Archangel. He launched an appeal to always renew their vocation: “Otherwise, this bad thing happens to us priests: we get used to it. And when something does not revitalize itself, it dies out, it becomes corrupted”.

“Charity”, first of all, which gives the strength, courage and patience to perform an important “service” like that of the policeman, even in the face of injustice or things that go wrong. Yesterday afternoon, Pope Francis celebrated the traditional mass for the Vatican Gendarmerie Corps, at the Grotto of Lourdes, located in the Vatican Gardens. The occasion was the September 29th birthday of the patron saint Saint Michael the Archangel, also protector of the Italian State Police.

Never get used to

To those who are commonly called the pope’s “guardian angels”, Francis first spoke of “vocation”. Those who carry out this work have in fact received a “call” which, as the Sovereign Pontiff pointed out in his quite informal homily, must be renewed each time:

” Almost all of you, each one – I want to think so – entered the Gendarmerie by vocation, by the desire to do something good, like a service, like growth. And then, as it also happens to us priests, to everyone, we get used to it; and when you get used to it, instead of growing, you go down, down, down… “.

Thus, said the Pope, is born ” this very ugly thing in the life of the priests that is lukewarmness, to be lukewarm “. ” We get used to it. And the same thing happens to you. If you do not revive your vocation, admonished the Sovereign Pontiff, if you do not make it grow every day, this vocation of service which is very beautiful, in the end – it is not a curse, no, it happens to everyone – in the end things that don’t grow get corrupted “.

During Mass for the Vatican Gendarmerie

A faith in service

The gendarmes therefore need faith “. ” Our life, if we do not live it in the light of faith, it is better to go and do another job said Francois. ” My life, the life of all priests, and your life as police. Because you go forward with a spirit of faith; it is important to live this faith in service, real service. Then charity and strength “.

” It is difficult, in professions like yours, to have this charity of service on a daily basis: there is impatience, anger at something that is wrong, the injustices that we see and that we cannot repair… And that can extinguish charity, and that gives us this spirit of timidity, of denigration… No. The Lord asks us for a spirit of strength, to live again with strength, with charity and with strength, not with timidity “.

If you make a mistake, apologize and move on

The wish is therefore not to have the shyness that brings you down “. “ Come on, courage, you do things “, encouraged the Pope. ” And if you make a mistake, ask for forgiveness and move on, because a mistake is not final “.

” It is trueadded Pope Francis, that very often you have to do jobs that are not pleasant: to tidy up here, to drive out those who are over there… So many things. But you do it out of love and to find greater harmony, you do it out of service. Return to the roots of your vocations. Service. Service, like that, without timidity, with charity, with strength, with “illusion”, service always like that. And then, in the end, what do I do? Do I have to pay the bill for my service? It can be done, the pay is there, it’s small, they complain but it’s there, but it’s not the reward, it’s not the attitude “.

The attitude is the so pretty ” phrasing : ” We are useless servants which stems from humility. ” I did what I had to do, I made my vocation grow, I took it forward “.

At the end of his homily, the Pope asked for the grace of Saint Michael the Archangel so that all the gendarmes could ” revive the gift you have received, with a spirit of charity, of strength of service and not of timidity, of self-confidence “.

And so, the various problems that you will encounter in life, in fully living a vocation, will dissolve on their own. ” Problems dissolve when there is a force to drive them forward “.

The Pope to the Gendarmes: never extinguish charity in service – Vatican News

Where does the NBA punchline on Cancún come from? A look back at the origins of a destination that ...
Seif Jaziri, from precocious talent to incisive joker: Percussion suits him so well | The Tunisian ...
Let us pray like the apostles, our gaze turned towards Heaven
Tweet
Share
Share
Pin