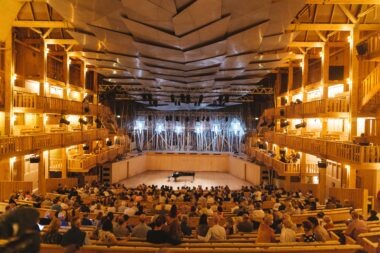 During the thirtieth edition of the Rencontres Musicales d’Évian, pianist Bertrand Chamayou and harpsichordist Jean Rondeau performed in recital, inviting in turn the public from both shores of Lake Geneva on the paths of transcendence.

To access the Grange au lac, a magical room dreamed up by Rostropovitch and created almost thirty years ago by the architect Patrick Bouchain, you can take a shuttle or the historic funicular and its two wooden wagons. If you come from Lausanne, the ascent is preceded by a crossing of the lake by boat which leads not to the shore of hell but to the urban edge of this green paradise. We then enter the large “wooden tent”, an arch of aligned and rough planks that have taken on the colors of the times. We are seized by the intoxicating smell that transpires from the place like a part of the angels, while we discover the scene in the subdued light. The piano which occupies the center of the stage-clearing awaits a magician.

Perspectives on Liszt and Messiaen by Bertrand Chamayou 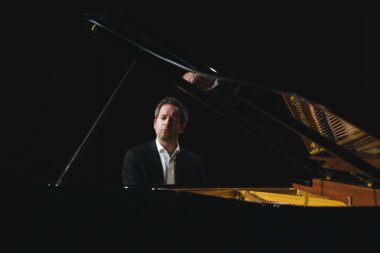 Si fa sol d… the four notes of the Solemn March to the Holy Grail of Parsifal (Wagner/Liszt) rise from the bass, and progress inexorably under the fingers of Bertrand Chamayou, the attention calmly drawn towards the resonances that he sets in motion, their gently dark then bronze colors, setting in motion the piano soundboard as if they were heavy bells. The wooden room gradually fills with these giant resonances, becoming a cathedral. The rich, woody, somewhat dull acoustics magnify the sound, revealing its sumptuous texture. Then a silence. On its surface, supernatural treble delicately sprinkled with light. The march is powerfully amplified by its full and broad chords. Here we are embarked on a metaphysical epic which will lead us to the Dantesque deluge and its beyond, first passing through the sublimated nature of the Switzerland of the First year of pilgrimage and the mystique of Regards. Bertrand Chamayou has composed a program linking works chosen with great relevance from the two great cycles of Franz Liszt and Olivier Messiaen. The first recorded about ten years ago, the second recently appeared on record. With happy volubility, At the edge of a spring shines with gushing and fresh colors, beforeThunderstorm bursts out, tumultuous, prefiguring Dante’s hell, unleashed but not a note of which escapes the pianist’s control, in a physical commitment that earned him a few seconds to catch his breath, before The Obermann Valley. There the discourse is conducted, profound, collected, without a gesture too much, it questions, unquietly it implores, it becomes feverish, the pulse quickens, the thought rises, exults. the Gaze of the Spirit of Joytenth of Twenty Looks at the Child Jesus, which succeeds it “quite naturally”, dances at the beginning, tinkles with its chimes, splashes with light and its gold and bright silver colors all that preceded, in ascending dynamic movements of superb vitality. A jewel of tender delicacy, of mystery, the First Communion of the Virgin lets hear the delicacy of a bird’s song, like the breathing of a soul. Through the poetry of his singing, the meticulous touch of the pianist who leaves no note to chance, the Sonnet of Petrarch No. 123 seems to maintain secret correspondence with her. respite thatAfter a reading of Dante shakes things up: if the dizzying virtuosity of Bertrand Chamayou nails the listener to the spot, his narration keeps him spellbound and drags him into dizzying whirlwinds, from its burning chasms to its celestial peaks, between grueling violence and heavenly gentleness. The concert ends with an elegant Pavane for a deceased Infanta and an Alborada del gracioso amazing precision and character, followed by a last encore, the girl with linen haira nice Debussy side step by this Ravelian Bertrand Chamayou.

G like Goldberg by Jean Rondeau and Tancrède D. Kummer

The next day two experiences await us. They are brought to us by harpsichordist Jean Rondeau, later joined by drummer Tancrède D. Kummer. To start, we go down this time to the Church of Notre-Dame de l’Assomption to find Jean Rondeau in an interpretation of great spirituality of the Goldberg Variations, after a short improvisation. The two-manual German harpsichord sounds warmly even and quite meaty. From theAria, richly and subtly ornamented in his repeats, we understand that the musician will not deprive himself of this opportunity offered by Bach: taking the “exercise” at its word, he plays all the repeats, artfully inserting trills, mordents, gruppettos of his invention in the thread of the speech without ever weighing it down, with exemplary fluidity. Sober and respectful to the letter of the text, its rhythms, its fine articulations, he puts his imagination at the service of the composer without ever intervening, but with the aim of highlighting the quintessence of his music. The voices sing, the silences breathe, the music flows naturally, and what care is taken with the concluding… or suspenseful bars! Jean Rondeau links the variations sometimes without transition, however creating a long caesura after the fifteenth, as if to open a door to something else, to the light then the jubilation of the chiming Quodlibetand closes the cycle on theAria stripping its theme to the extreme in the final reprise.

This hour and forty of music will be repeated in another way the same evening in the Grange, with Tancrède D. Kummer, drummer from the world of jazz. The opportunity to discover the qualities of pianist and composer of Jean Rondeau in undr, work of the two artists given here in creation. On the model of the famous Klavier-Übungstarting from the‘Aria played on the piano, thirty “variations” follow one another, musical, sensory and spiritual explorations often “drifting” very far from the original version. The structure is preserved with its succession of triads (slow movement, fast movement, canon from the second to the ninth), each variation bearing an evocative name beginning with G, from “Gloss” at “Genealogy” (Jitter, Gaillardiabut also Genome, Gomorrah, Gladiolus, Gaussian…). An atypical work, whose interpretation sometimes on the edge of writing and improvisation belongs only to its protagonists, born of their singular games. Quoting Jorge Luis Borges (“ undr which means marvel”), it opens multiple sound spaces giving the feeling of a disparity, soliciting an attention difficult to sustain for some over time (which will have little by little sparse part of the public, lost in the digressions) : dilated time, lyrical or repetitive sections, sound saturation, rarefaction, sounds refracted in real time by electronics (Silouane Colmet Daâge on sound), voices and texts by mixed authors, prepared piano, virtuoso drum solos, etc., leaving emerge here and there a few references, Rachmaninov, Messiaen, Debussy… So many musical and poetic blossomings which end in the troubled halo of the modified sounds of the piano, the night reaching the room, with the return of theAria recorded softly dying like consciousness in sleep, as the performers left the stage.

Bertrand Chamayou and Jean Rondeau in Évian: from one mystical itinerary to another – ResMusica