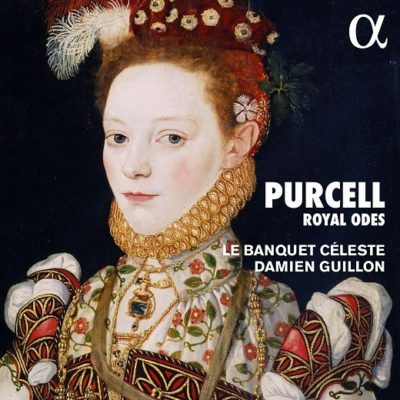 These three odes date from 1683-1685, when Purcell had just been appointed organist at the Royal Chapel, and before he shone in the operatic genre. The “Songs of Welcome” honored the return of the ruling family to the Palace of Whitehall, after their summer stay in the countryside. From those serene and rapturous joys is one of those welcome odes ; in the symphony introduction, does the abrupt transition from D minor to major evoke the re-establishment of the monarchy after the Commonwealth? Fly, bold rebellion Illustrates a foiled plot against Charles II. In an equally ingenious language, Why are all these muses mute also alludes to this attempted regicide, and falls within the context of the disappearance of Charles II, deplored by a arioso full of grief.

The Celestial Banquet team, of which this is the first album devoted toOrpheus Britannicusis currently touring in concert (Poitiers, Rennes…) with these royal odes. About thirty years ago, Robert King and his consort had engraved the twenty-four in a series under the Hyperion label which made history as a complete but was undermined by a deficient dramatism and a routine rigor. The return of the English musician for the Vivat label in the fall of 2020 shows little aesthetic change, and these jewels of the young Henry remain on the lookout for performers capable of restoring their eloquence and formal genius. The main virtue of the Rennes ensemble lies in the vocal and instrumental refinement, faithful to the chamber music vocation of these pages which, to be dedicated to the sovereign, are nevertheless embedded in an intimate expression.

Fresh and finely measured voices chisel all the emotion of the text, like Paul-Antoine Bénos-Djian in the Rivers from their channel turned. The figuralisms are not betrayed, neither by the style nor by the technique (Nicolas Brooymans in the formidable tessitura d’abysse du Acursed Rebellion). What a magnificent conclusion offered to the Z. 326: a With trumpets and shouts, introduced by an exultant Nicholas Scott (the crescendos after 0’32!) and joined by a resplendent choir. Certainly the instrumental accompaniment sometimes seems smooth and shy, some numbers remain on a slender reserve. But a delicate spirit reigns over the whole of this achievement, to the point that Purcell rarely hears himself served with such subtlety. What flexibility in Come then, change your notes with an exquisite rhythmic curve! What tact in the For majesty moves and But heaven has now dispelled those fears ! What a thrill in Welcome to all those wishes fulfilled ! Woven by a Banquet that is nothing less than celestial, this music seems less commanded by court pageantry than it is dictated by the lyre of angels. Within the discography: an infinitely precious testimony, which goes straight to the soul and sharpens our appetite for a sequel.

Panel of Purcell’s Royal Odes, by an Angelic Celestial Banquet