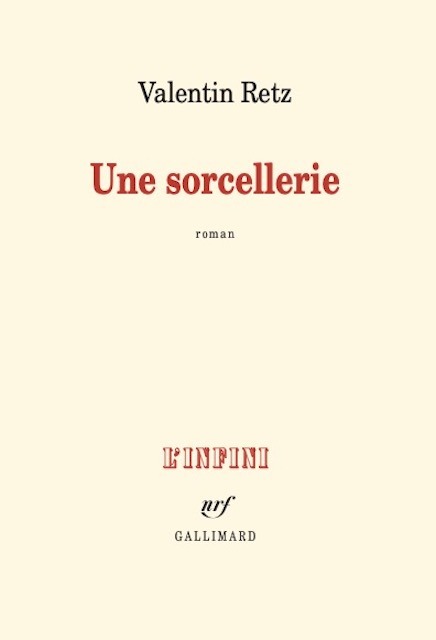 Un physically unsettling, stylistically stunning and spiritually uplifting book. Let’s not cut corners when talking about Valentin Retz’s new novel, which seems like his three previous ones (Great Art, Double and Perfect Black) in Gallimard’s L’Infini collection, so rare is it to read a literary work of such magnitude.

A narrator accompanies his nephew to the swimming pool spends an afternoon in total calm. Osmosis in the heart of the world, you have already experienced this, it is very real, palpable, when it suffices to look at what surrounds us to be entirely illuminated by it: “… walking in the small basin of the swimming pool, I saw myself in the middle of the clear rays of a clear sun, which the slightest drop of water, the slightest jet, the slightest ripple reverberated in a billion sparks shimmering.” Later that evening, he makes love with his wife. But in the process, here he is, tipping inside the other side of the world. “…in the Renaissance-style mirror at the other end of the room, just above the fireplace, between the library and the series of three windows opening onto the rooftops of the city, I saw such an amazing man that it took me a few seconds to realize it was me.” He is now outside his body, rushed into the head of a dark mage named Daxull. This is the first journey into the mind of Total Evil. Two other incursions into this same entity will punctuate a story that is the ultimate confession within an incredible catabase. “Some chasms are not meant to be measured; nor certain eyes, to scrutinize the unnameable. In any case, I would have liked never to see the face of the demons who hate us and deceive us, since man is called to find himself or to lose himself. But, for this, as for many other things that occurred in the wake of the visions that I relate here, I had to brave unprecedented terrors, resigning myself to a knowledge whose sequels I keep; although the struggles I waged to maintain my balance will no doubt have renewed me in a salutary way. However, I will not reveal all the secrets I learned; because many are really unreasonable. And as for those that I am about to divulge, they will be more than enough to satisfy any curiosity, even the most glaucous and the most misguided.

The reader is embarked on the nightmarish visions of this billionaire megalomaniac versed in new technologies. Here, a torture in an evening where his guests are asked to submit to a terrifying game during which they undergo the threat of jihadist head-cutters. There, a well-advanced, well-financed and well-crafted plan of unbridled transhumanism. Further on, a bewildering black ceremony carried by holograms in a singular reverse library. Daxull is as terrifying as it is overpowering, operating from a tragically contemporary effervescent anti-world. “I embraced the project that the demons had carried out with patience at the very heart of history, with the sole aim of cutting man off from any kind of transcendence: to lock him in the cosmos, to wall him in the city . But not only. Since today, according to Daxull, it was about locking the individual in the cyberspace of digital networks; so that the body and the consciousness adapt to it, that they are transformed there, that they mutilate themselves there, that they are diluted there, until finally their lamentable humanity disappears there completely. » And he is helped! Retz thus introduces us to Ogia, disciple of Daxull and moderator at… Facebook, the job from hell par excellence.

We read and we lose ground because fiction here maintains a relationship of belonging with reality: it is the furious arrangement of the world that is there in close-up. The novel thus acts as a spiral development of the essay It’s all done (Grasset 2019) written as a threesome with Yannick Haenel and François Meyronnis with whom Valentin Retz hosts the review Risk line. It is the same plan of thought, its romantic version. Are we not even today effectively, actually, concretely in the oblivion of the body and of what we are as beings of speech? Isn’t the devastation growing before our eyes in various increasingly diabolical forms? In recent weeks, hasn’t the Spectacle been trying to sell an already convinced global audience the promise of the metaverse ?

Retz sees this. A specialist in secrets, a follower of signs – a talent already at work in his previous books – he deciphers what seems so obvious and so unquestionable. Thus the sudden stupefying Google word read from right to left in the Hebrew line: ELGOO G. Magog is the word used in the Bible to signify by metaphor the forces of evil and their reign. The evil god GOG is thus present everywhere at every moment on the planet. But who says a witchcraft necessarily implies a special dévoûtement and Retz here deploys a great literary pass. Archetypal principle of literature: extricating oneself from something like evil, accessing a seesaw within the seesaw, towards the anabasis. Will the narrator succeed? Will he escape, between Geneva, Brittany and Israel from the teeth of the big bad Daxull? This passage which announces the last part of the novel perhaps says so. Reassembled in his own name, his own being, he finds himself with his wife thirty kilometers from the oasis of Ein Gedi in Israel. The sky sends down waterspouts that spread in waves near their car. “(…) I stuck my hands in the yellowish water, in a place where it flowed slowly. I even wet them up to my wrist, gripping the soft earth with energy. However, as soon as my skin came into contact with these elements, it seemed to me that my being expanded in an incredible way or, to put it better, that the melody of the water put me in the presence of its flow. . For images, intuitions, sounds began to flow through my mind: I saw the Dead Sea in the direction of which the water was flowing, and I saw the peaks that it tumbled down; I saw the heavy rains that connected earth and sky, and I saw the clouds that concentrated their drops. And all of that was just one journey, just one event, just one reality. Yes, in the same way that a drop of water maintains physical contact with the entire ocean, my two hands went up into the clouds; clouds which, at the same time, enveloped the city of Jerusalem, pouring into it the storm, thunder and lightning.” The ravage does not know it but it could well be surrounded by the unscathed.

Valentin Retz, a witchcraftGallimard collection L’infini, October 2021, 240 pages, €19 — Read the beginning of the novel.
The author granted us an interview in May 2020.

The battle for light by Valentin Retz: A sorcery