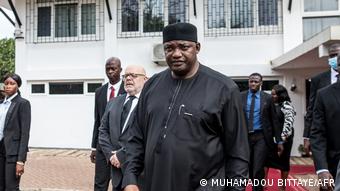 The Gambia is still healing its wounds, five years after the departure of Yahya Jammeh, who led the country for 22 years by instilling fear and repression of the opposition. Last May, the government of Adama Barrow agreed to implement the recommendations of the commission which investigated crimes committed during the dictatorship. Objective: to launch a process of reconciliation and bring the culprits to justice.

In the village of Jambur, everyone remembers the witch hunt orchestrated by dictator Yahya Jammeh in 2009. For Alieu Mbaye, it marked the end of his working life. He was forced to drink a mixture of dangerous herbs and never regained his health.

“I lost my job and my children could not complete their education. Now my family’s survival depends on my good friends and extended family. Before drinking the mixture, I was a strong man, I worked in construction. I have built many houses herei” explains Alieu Mbaye who is one of the 61 people who were accused of witchcraft in Jambur. About twenty of them died. Even today, the survivors suffer from stigmatization. always present.

President Adama Barrow has agreed to implement the recommendations of the commission which investigated crimes during the dictatorship.

So, the younger generations are trying to find solutions to reduce the fractures within their society. Ousman Bojang is one of them.

“It’s very difficult for us young people, the stigma attached to our elders impacts us a lot, people see us as a community of wizards. Sometimes we wanted to fight, but as young people we found that dialogue is the key in any situation. Reach out to people, make them aware. We see it as our common responsibility to address these issues”explains the young man to the DW.

Witch hunts, but also torture, arbitrary detentions and abuses feature in the long list of crimes committed under Yahya Jammeh’s regime. Six months ago, the government accepted the recommendations of a specialized commission of inquiry to begin the process of reconciliation.

But many victims say they see too little concrete results, especially since the government has allied itself with some former supporters of Yahya Jammeh – an act that some call a betrayal.

For political analyst Sait Matty Jaw, the concept of reconciliation needs to be clarified. “They think that by getting closer it will be seen as a process of reconciliation. In our context, the very idea of ​​reconciliation is complicated” he assures before specifying that given the nature of the violations in The Gambia “if reconciliation must be between victims and perpetrators, then the populations are the victims and the State is the culprit. The way the state can reconcile with the public is by ensuring that there is more trust, more citizen participation in the democratic process and that they receive basic public services.“.

A good prerequisite framework for an effective process

The Ministry of Justice, for its part, ensures that it is doing everything possible for an effective process, centered around the needs of victims. A specific criminal legal framework will also be created. “The transitional justice process in The Gambia has moved very quickly. We brought eight people to justice in the space of four to five years. It is very important to have a good preliminary framework. There is an urgency, but if we give in to pressure and rush things, there is a risk of not doing things perfectly ” assures Kimbeng Tah, the deputy director of civil trials within the Ministry of Justice.

During the investigation, conducted from 2018 to 2021, more than 2,000 victims were officially identified. But due to certain taboos, linked for example to rape, the number of victims could be much higher.

Priscilla Yagu Ceesay leads the NGO Wave which helps women who suffered violence during the dictatorship, according to her “the women’s support group is made up of victims of different violations and that’s what makes it beautiful“. Even in 2022, explains Priscilla Yagu there is still “men who make decisions for women, who speak for them, don’t let them breathe and talk and share, so this is a safe place for women. It allows them to be themselves and talk about the issues that concern them“.

For this country of 2.5 million inhabitants, the smallest in West Africa, moving forward is a matter of necessity. The road to reconciliation has begun. But it still needs to be consolidated.