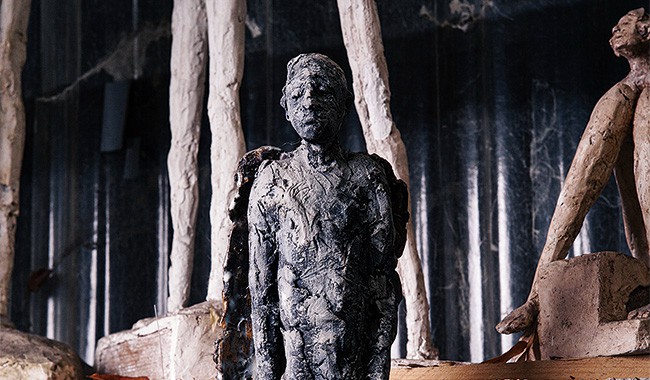 As a worthy daughter of my father, a senior civil servant, I first threw myself into the intellectual world. For 12 years, I complied with my studies by being a lawyer at the Paris Bar. The legal reasoning intoxicated me, I must admit.

And then one day, I had a revelation, I suddenly realized that I had a talent for sculpture. On a beach, I began to model in the sand a woman swimming towards the sea. People stopped to ask me questions, congratulate me, and even ask me where I was exhibiting!

Back in Paris, I went directly to enroll in evening classes at the École des Beaux-Arts. Seeing the head I was working on, my teacher was surprised: “But you’ve been doing it for 15 years? » Clearly, there was something that didn’t come from me, that didn’t belong to me. Of the order of the innate, of the gift.

A taste for materials, volumes and shapes

Still, in 2003, I ended up giving up law for sculpture, I was then pregnant with my second daughter. By making this 360 degree turn, I turned my back on the paternal branch, but I reconnected with the maternal branch. André Dunoyer de Segonzac, painter, engraver and illustrator known in his time, was an uncle whose works covered the walls of my grandmother’s living room. Among his 10 children and his grandchildren, many have taken up the torch by becoming artists, musicians or painters.

Perhaps it was this family heritage that gave me a sensitivity very early on, somewhat frustrated by my career as a lawyer, coupled with a taste for materials, volumes and shapes. As a child, I already observed everything around me. I scanned men and women from the soles of their feet to their hairline! I have thus accumulated a monumental bank of images over the years.

The encounter with matter

What is fabulous in my work, and which always fascinates me, is that “things” appear as if by miracle. When I started sculpting, I didn’t know what I was going to do and, depending on the form it took, I modeled a face, a smile, a silhouette… Then a work emerged, alive, inhabited, present, and looking at me.

I only let myself be driven by the desire to go to the end of this encounter with the material that “calls” while the hands seek the right gestures. Custom work, more frequent now, presents the stimuli of the constraints it induces.

I have to adapt to the places, understand the expectations of the sponsors, and therefore look for ways to move forward, to circumvent the difficulties. And so I go from discovery to discovery. For example, when the world’s tallest luxury hotel, located on the 100th floor of the Shanghai Tower in China, commissioned me from seven toast dancers for its lobby, I had to think of a process specific to reinforce and “enrich” the raw yarn.

Each material offers a different line. The earth, carnal, sensual, allows a more interior and intimate work. She is the matrix to which I always return. Wax, which precedes bronze, offers another feeling at work. Wire or netting, an extremely light and graphic material that I discovered one day in a public dump in Bréhat (Côtes-d’Armor), makes it possible to express movement, to write a face, an expression, to draw the grace in space by playing with transparency, lights and shadows. Hemp yarn also allows you to explore the boundaries of design and volume.

Unlike sculpture, which is very physical, painting is a very restful art, a meditative breath. I got into it more recently during an episode of less resistance… All mediums arouse my curiosity, I’m a real jack-of-all-trades! But whichever one I choose, I like, in my works, to leave room for the unfinished which allows the viewer freedom and does not confine them to an imposed proposition.

The search for beauty

Going to the end of the meeting is also trying to convey something that is beyond me. Emotions, and, even more profoundly, the experience of a certain verticality. If I had to formulate the ambition that drives me, I would say, at the risk of sounding pretentious (laughs) : to create, from the gravity of matter, a form of resonance with transcendence. Seize the transience of attitudes, the fragility of the moment when the body surpasses itself and becomes grace. In this spirit, I am concerned about elegance.

This word may seem prosaic, but it refers to the search for beauty. Is beautiful what elevates in my opinion. In this, the spiritual dimension of my work is evident. I say “spiritual”, and not religious, because it is universal, this experience of the artistic encounter which reminds us of a reality greater than ourselves.

Caught up by sacred art

Sacred art, quite incidental in my approach originally, has caught up with me a bit lately. It all started in 2015, when the Parisian Madeleine church offered me to create a nativity scene (every year, the parish asks a contemporary artist to reinterpret the theme). Then there was an exhibition called Thanks at the Fabrique du 222, des Dominicains, in Paris, then at Notre-Dame-de-Pentecôte, the church house in La Défense, where I exhibited around thirty clay, bronze and wire crosses.

In 2019, the Saint-Louis-de-Gonzague college commissioned a statue of Saint Ignatius from me and, for the Parisian church of Notre-Dame-de-l’Assomption, I made the new altar and the ambo. That I am thus “caught up” by sacred art is a good thing since, like every believer, I need to nurture my relationship with God.

However, to retransmit in visual art a religious subject, I always start by documenting myself. This impregnation deepens my knowledge, and, therefore, my faith. Then the realization in itself is a provision, a real prayer nourished by all that I was able to receive upstream. Each time, I am carried, transported, overwhelmed by what I believe to be the power of grace.

In moments of doubt, about the Church for example, which is in the hands of men for better or for worse, I find it good, consoling, to touch the reality of grace in this way. To be brought back to the essential: God. Yes, designing and creating a sacred work is a strong moment for me, sometimes even a mystical encounter. This was particularly the case for the liturgical furnishings of Notre-Dame-de-l’Assomption.

With the Apostles, a connection was established

The project included 12 large panels depicting the Apostles. I first immersed myself in the study of these men, to better understand the life, the role, the characteristics and the profile of each one. I then looked for a technique to directly model the fresh concrete and thus rediscover the gestures and the freedom of the sand sculpted on the beach.

During my research, I discovered that when you cast a concrete slab, after five hours, you have 30 minutes during which the material is moldable before it gets too hard. Finally comes the moment of shaping. It was in November, it was dark and cold. The Great Greenhouses of Pantin (the former Pouchard factory which hosts artists in residence) were plunged into a great silence. Nobody on the horizon. And so I had 30 minutes for a fair meeting, with my concrete apostles. A connection has been established, undoubtedly.

Ignatius, a saint of flesh and bones

My cohabitation with Ignace was also a significant experience. For several weeks, I read a lot, meditated. Three major elements appeared to me, and which seemed important to me to transmit to the students of the college: the smile expressing the deep joy that the young Spanish hidalgo feels in abandoning worldliness to follow Jesus; the staff and the habit recalling the pilgrim on his way to Rome; the outstretched hand of Ignatian pedagogy which accompanies the talent of each one.

Yes, I wanted to shape not a bust that was just one piece of furniture among others, but a saint of flesh and bone who surprises and touches by his humanity. Even bronze, which is frozen, can suggest movement and life.

There again, during the production, I had the strange sensation of having a spiritual encounter. And when I looked at my Saint Ignatius once completed, I found him touching, tender and alive. Would I have had the same feeling representing anyone? Maybe well, because when you spend time getting to know a person, inevitably you end up loving them! In the end, it’s always a story of encounter.

The stages of his life
1967 Born in Dreux (Eure-et-Loir), in a family of four children.
1991 Sworn to the Paris Bar.
2003 Devotes himself to sculpture.
2013 Gold medal for animal sculpture at the Salon d’Auteuil in Paris.
2015 Revelations, nativity scene for the Madeleine church in Paris.
2016 Thanksat Fabrique 222, in Paris.
2019 The apostlesliturgical furniture of Notre-Dame-de-l’Assomption, in Paris and exhibition face to face at the Paul-Belmondo museum, in Boulogne-Billancourt.
2020 Flight, the call of the seainstallation of four birds in the Docks district of Marseille.
2021 Dancing in the Air, set of seven sculptures in the Shanghai Tower, China.

Pauline Ohrel: “Sculpting a sacred work is a highlight, sometimes even a mystical encounter”