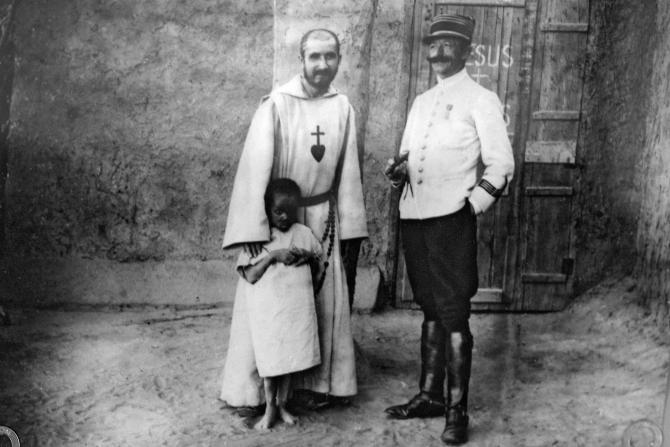 His process for beatification had begun in the 1930s and he had been declared “blessed” in 2005 by Pope Benedict XVI. On Sunday morning, Charles de Foucauld will be canonized by Pope Francis in Rome, alongside nine other figures of the Church.

Nothing predestined Viscount Charles-Eugène de Foucauld, born September 15, 1858 in Strasbourg into a wealthy family, to this life of “isolated missionary“seeking”always the last of the last places“.

Orphaned at six, he was raised by his maternal grandfather, a colonel in the French army. After studying at Saint-Cyr, he became a reveler officer who squandered the fortune bequeathed by his grandfather on his death.

He left the army in 1882, when he was a cavalry officer, to undertake a reconnaissance trip to Morocco. It is the beginning of a long period of explorations on the tracks of the Maghreb that he will evoke in a book, “Recognition of Morocco” (1888), written in collaboration with the French explorer Henri Duveyrier.

Islam, he says, produces in him”a profound upheaval“. Respectful of Muslims, he will maintain a sincere friendship with them.

Charles de Foucauld, who lost his faith during his studies, rediscovered it in 1886, at the age of 28, after a meeting with the priest of the Saint-Augustin church in Paris. From then on, he had only one objective: to imitate the life of Christ.

In 1890, he entered La Trappe. For seven years, he lived as a monk at Notre-Dame-des-Neiges (Ardèche) then at Akbès (Syria), before leaving this order to live as a hermit in Nazareth and Jerusalem. After his ordination as a priest in 1901 in Viviers (Ardèche), he returned to the Maghreb and settled in Beni-Abbès, in western Algeria.

His first contacts with the Tuaregs of Hoggar (southern Algeria) date from 1904. A year later, he settled in Tamanrasset, in the Algerian Sahara, among the Tuaregs whose language he learned and for whom he was the “marabout“.

“He chooses to go to the Tuaregs because they are considered marginalized by society: he wants to be among those who seem to him the poorest, neglected and despised, and act as a pioneer“, explains to AFP Bernard Ardura, postulator of the cause of canonization.He will deeply respect them and wants him and those who follow him to be universal brothers.“, he adds.

The missionary, who also studied Arabic, Berber and Hebrew, is the author of several books on the Tuaregs.

He will become a reference in the knowledge of these nomads, notably writing a “Tuareg-French dictionary, Ahaggar dialect” which is still authoritative today and translating more than 6,000 lines of Tuareg poetry.

Also interested in pharmacy, agriculture or meteorology, the religious devotes long hours to prayer and meditation which lead him to write in particular “Spiritual writings“.

Charles de Foucauld wants to be “missionary“of Jesus, his”beloved“, by example.”Seeing me, one must say to oneself: + since this man is good, his religion must be good +“, he said.

Death surprises him in Tamanrasset, on December 1, 1916 in the fort he had built and where he took refuge. Taken prisoner by looters, he is shot dead. His body rests in El Menia, in the center of the country.

Charles de Foucauld, who is the “universal brother” who will become a saint?