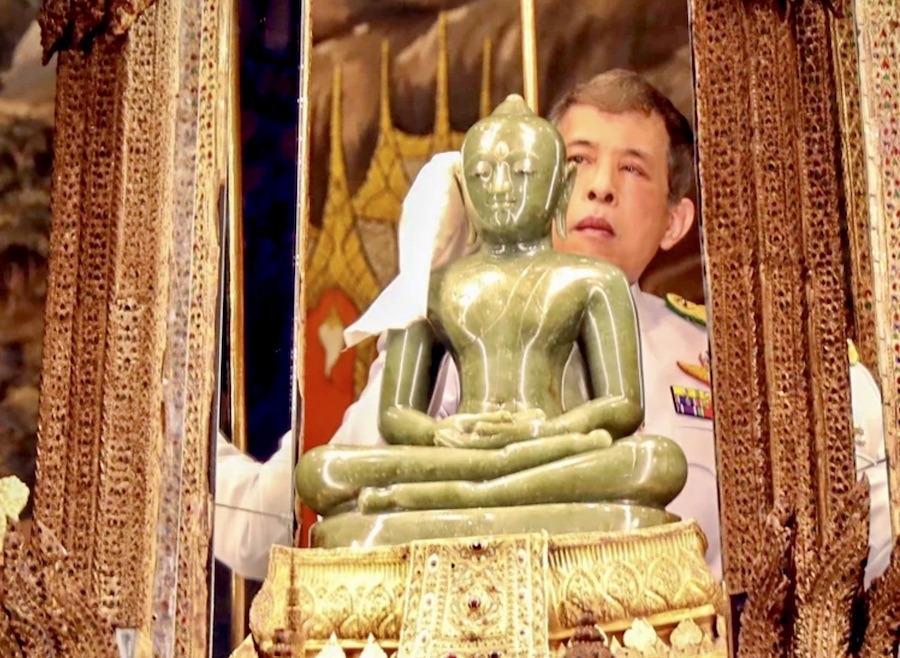 Gavroche has selected for you some salient news in Thailand during this past week. An essential overview of the news for anyone interested in this Southeast Asian country.

His Majesty King Maha Vajiralongkorn changed the attire of the Emerald Buddha for the winter season during a ceremony held Wednesday (9 November) at Wat Phra Si Rattana Satsadaram (Temple of the Emerald Buddha) in Bangkok . The Buddha is now clad in a gold helmet studded with diamonds and a gold mesh shawl with fringes. Her Majesty Queen Suthida Bajrasudhabimalalakshana was present at the ceremony. This ceremony is organized three times a year. The Emerald Buddha is adorned with three sets of seasonal decorations: two were made by Rama I, one for the hot season and one for the rainy season, and a third made by Rama III for the cool season.

The French President will take advantage of his presence at the APEC summit in Bangkok on November 18 and 19 to discover Thailand and salute the old closeness between the two countries. In addition to the imposed diplomatic meetings, Emmanuel Macron will visit Thai historical sites where French speakers have worked. He will also meet a delegation of Thai intellectuals. “France and Thailand have had relations for three centuries. Thailand has always been independent. These are very important realities that we intend to highlight, ”says one from the side of the Elysée.

Thailand’s stock of Covid-19 vaccine is now sufficient to meet demand and there is no need to procure additional vaccines, according to the Royal Gazette.

The bill allowing land acquisition for wealthy foreigners was withdrawn. This Tuesday, November 8, Thai Prime Minister Prayut Chan-Ocha confirmed after the cabinet meeting that last month’s proposal to change Interior Ministry regulations that would allow foreigners to own up to 1 rai of land if they invest 40 million baht per year for 3 years has been removed.

Hong Kong will fully support Thailand and contribute to the region’s economic recovery. Lee Sheung-yuen, director of the Hong Kong Economic and Trade Office in Bangkok, applauded the theme “Open. Connect. Balance,” from this year’s Apec summit. He said that with this motto, Thailand provides a core set of values ​​to guide the Asia-Pacific community towards a balanced, inclusive and long-term post-pandemic recovery.

Prime Minister’s Office Spokesperson Trisuree Trisaranakun revealed on November 5 that Thai Prime Minister Prayut was satisfied with employment statistics from July to September this year. One million Thais are formally unemployed. The spokesperson said the unemployment rate has decreased, more people have jobs, and the social and economic situation is improving after maintaining the employment rate during the pandemic.

Thai Airways International plans to appoint a new permanent CEO as early as January 2023, as part of its restructuring plan, said Suvadhana Sibunruang, acting CEO. The new chief executive will take office as the company continues its major reorganisation, which has so far halved its workforce and aircraft fleet.

The Thai economy shows many signs of improvement over the first 3 quarters of 2022. On the foreign trade front, the current account returned to a surplus position of USD 623 million in September, for the first time since the start of the year, mainly due to the increase in tourist receipts (1.3 million foreign tourists in September and 5.7 M over 9 months). Net inflows of foreign capital on the stock market also continued to increase to reach 154 billion THB (4.3 billion USD), a sign that foreign portfolio investors consider Thailand as an attractive and safe territory in connection with the solid financial performance of Thai groups over the last 3 quarters. In terms of prices, the situation is improving, with the inflation rate gradually falling from the peak reached in August (+7.9% y/y) to just below the 6% mark in October (+5.9 %). The improvement in economic fundamentals is finally reflected in the continued rise in the consumer confidence index, which in October recorded its fifth consecutive month of increase (46.1 after 44.6 in September, 43.7 in August, 42 ,4 July and 41.6 in June).

Thai rice exports increased significantly over the first 9 months of the year, benefiting from an acceleration in global demand and the weakness of the baht. In volume, the increase thus amounts to 40% y/y to reach 5.4 Mt over the first three quarters of the year, while export receipts increased by 36% to 95.2 billion THB (2 .7 billion USD), allowing Thailand to rise to second place among rice exporters behind India. Over the period, exports increased in particular to Iraq (+511%), the United States (+29%) and China (+30%). While India has decided to stop its broken rice exports since September, this situation should benefit Thai exports which could reach between 7 to 8 Mt in 2022 according to the Thai rice exporters association.

In a new edict taking effect on November 13, Thailand’s Ministry of Public Health has tightened rules on who can grow and sell cannabis, and where. The new edict, which has already been published in the Royal Gazette to make it official, now replaces the initial announcement of the legalization and decriminalization of cannabis on June 16. The new law strengthens some of these rules, making it illegal to sell any form of cannabis to pregnant or breastfeeding women, people under 20 and students. But it also limits where cannabis can be sold and smoked.

It’s a beautiful tradition, and it continues. To celebrate Beaujolais Nouveau, the French ambassador opens the gardens of his magnificent residence on the banks of the Chao Phraya. The opportunity for the French-speaking community to get together around a casual country buffet and to participate in a good cause on Saturday, November 26. The earnings of the evening will go to the treasury of Charity in Thailand (AFBT), an association which helps French people – residents or tourists passing through – in difficulty.

The Loy Kratong festival celebration nearly turned tragic in Nakhon Phanom, when 12 people were injured by illegal fireworks set off during the event in the province. The mayor of Nakhon Phanom announced that the victims suffered only minor injuries. Fireworks had been prepared to be lit at the end of the opening ceremony. However, due to technical issues, the fireworks did not soar skyward and scattered through the crowd, injuring 12 residents and government officials who were nearby.

On November 8, a teacher at a school in Hat Yai murdered her 5-year-old autistic son by smothering him with a pillow in Songkhla province, southern Thailand. After the murder, she attempted suicide by drinking cleanser but ended up hospitalized.

The Thai Immigration Bureau (IB) has just unveiled its electronic Temporary Stay Extension (e-Extension) service to facilitate visa extension applications. This service covers part of the process, application for registration, uploading documents and paying fees, through a dedicated website, Thaiextension.vfsevisa.com. It would officially reduce application processing time from one hour to three minutes.

On Sunday, November 13, BLACKPINK’s Lalisa “Lisa” Manoban won the award for Best K-Pop at the 2022 MTV European Music Awards. Although the Thai artist was unable to attend the ceremony in person to collect her award, she shared her thanks to fans around the world in a pre-recorded video.

According to the Food and Agriculture Organization of the United Nations (FAO), the Thale Noi Wetlands Pastoral Buffalo Agro-Ecosystem has been declared the first Globally Significant Agricultural Heritage System (GIAHS) of Thailand.

Each year, the province of Surin, in the northeast of the country, is the scene of one of the largest gatherings of elephants in Thailand. This festival honors the lifestyle, culture and tradition of the local Kui people and the long-standing relationship they have had over the years with the kingdom’s elephants. The main attraction is scheduled for the weekend of November 19-20, 2022. On November 19-20, a sound and light show will take place at the Surin Elephant Show stadium, starting at 7:30 p.m.

The Ministry of Culture will release “Hanuman: White Monkey”, the film version of Khon’s classic story about the great monkey god. “Hanuman: White Monkey” is a film that features scenes in the khon style of the classic Thai masked game, inspired by the original story about Hanuman from the classic Ramakian, the Thai version of the Hindu epic Ramayana.

The Tourism Authority of Thailand has launched a new tourism campaign in Britain, with the slogan ‘Always warm’, through a distinctive London bus wrap. London’s double-decker buses have been wrapped in “Always Warm” decoration to encourage travelers to visit Thailand, where the weather is always sunny and warm and hospitality is renowned.

THAILAND EXPRESS – NEWS: What to remember from Thai news from November 7 to 13?