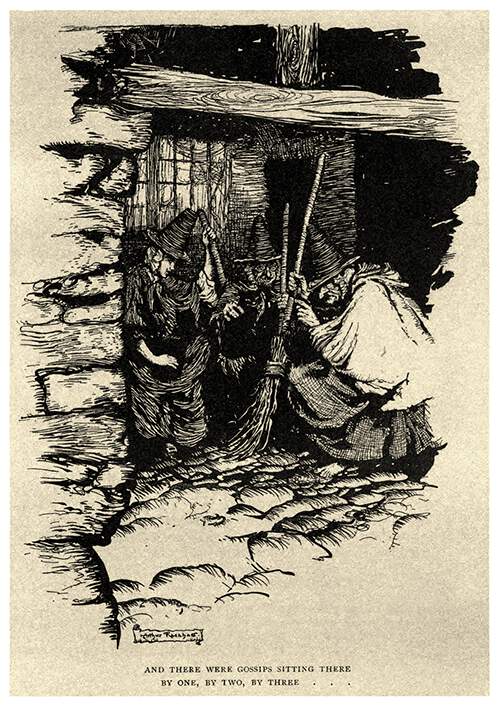 Witches and wizards have long been depicted in different ways throughout history, sometimes wicked, evil, cruel, naughty, sinful or so benevolent, protective, divine, warm in communion with nature or even adolescent icon.

What we want in this article is to show young and adult audiences, the witch in all its aspects, demonstrate the discriminations that have taken place, break down the prejudices of the witch on her broom which is part of folklore, but which is far to be the origin of the myth, they existed since well before this vision and these archaic prejudices of today.

Witches have existed since prehistoric times, but their reputation has not been the same over time. From respected people to persecuted characters, they have had their ups and downs.
A witch can be a source of repression, but others have wisely contributed to the development of our world by practicing their knowledge alongside great Kings and Princes. They are healers, counsellors, clairvoyants. At that time, they were considered wise in relationship with God.
Then in the Middle Ages, witchcraft was an invisible phenomenon, practiced mainly by a community made up of women. The story says that she makes a pact with the devil in order to obtain birth powers or other satanic privileges.
Arrived in the 15th century, the witches were extremely persecuted by the Church which sees them as a heavy threat by accusing them of macabre practices such as the sacrifice of children. In the 16th century, in France, witches were hunted, hunted down until the day when there were nearly 50,000 condemnations to the stake.

Different cultures: types of witches in the world:


Paying particular attention to astrology and the signs of the zodiac, she focuses on how energy influences the world. This type of witch uses planetary traits to call upon their energy (ex: full moon). His knowledge helps him guess how energies will influence the future or predict events.

Divination witches have existed in every period of history. She uses her magic to predict the future through cards, tarot or Yi king. The story goes that the deities gave advice through this type of witch.

This witch is in harmony with the ocean, fascinated by mermaids and has an intense connection with the ocean and its depths. But she was seen as a female, malevolent spirit.
She practices dowsing which is a method of divination consisting in invoking water, metals or underground tombs.

The Green Witch is known for her skills in controlling the forces of nature. Its magical properties are based on respect for nature and its living beings. She practices herbalism which allows the botanical study of plants for medicinal purposes. She is able to use the energy of trees for healing purposes.

The kitchen witch exercises her powers through the energy provided by the materials of everyday life, rather material objects and not by divine powers. Their powers emerge when cooked and have often been accused of poisoning.
Even in the general image of the witch, we find an old woman stirring her cauldron with a ritual of a magical nature around food.

Witches of famous tales and legends:

Famous magician, daughter of Helios, the Sun god, and the oceanid Perseis. She had the dangerous power to transform, by her potions and incantations, human beings into dogs, lions and piglets. This is how she transformed the companions of Ulysses stranded on his island.

Magician half-sister of King Arthur. Originally a positive character, she is later presented as an enemy of King Arthur, his wife Guinevere and the Knights of the Round Table.

A witch renowned for her cruelty and wickedness and her terrifying appearance. Granddaughter eater. She moves by flying seated in a magic mortar, using a millstone as a rudder and she meticulously erases her tracks with her silver birch broom.


The Cannibal Witch from Hansel and Gretel

Cooker, dweller in a gingerbread house, cruel and ruthless, this wicked cannibalistic witch, imprisoned Hansel and Gretel, wanting to eat Hansel and forcing Gretel to work for her.

The Evil Queen in Snow White

The Evil Queen is the King’s second wife and Snow White’s stepmother.
Queen with the sole ambition of being the most beautiful woman on earth, being ready to do anything to remain so, poisoning Snow White with a poisoned apple to remain so.

A supernaturally beautiful, cold-hearted witch, feeling no emotion, she kidnaps Kai, a young boy, to freeze his heart.

Evil fairy and main antagonist of the film, “Sleeping Beauty”. Maleficent is the embodiment of pure evil, and is responsible for the misfortunes of King Stephen’s kingdom.

Witch with black skin and frizzy hair, mistress of fetishes, her body adorned with the jewels of her enemies, this witch is the antagonist of the film “Kirikou and the witch”.

the witch of the west / the sea witch / the white witch

and many other more modern ones such as Harry Potter, Tara Duncan, the halliwell sisters…..

The more contemporary witches rock today the public of the whole world, they leave the beaten path and the cliche of the old witch, they give a vision of strong, modern and independent woman.

During a 1-hour interview with Mrs. Véronique BEAULANDE-BARRAUD, we had several questions to ask and topics on which we wanted to be enlightened.

Objectively in the general picture what is a witch?

“Historically, we don’t know” was the first answer to our question.
In itself, we have more knowledge about the witch hunt than about the witches themselves.
Someone was believed to be using sorcery when said person was known to have powers of healing and divination.

Witchcraft was also associated with a kind of pythia or “super healer”.
Then after intervention of the church there was a phenomenon of panic fear of the population who ended up seeing them as being satanic beings.
According to The Church, witchcraft is defined as being a satanic practice perpetrated by a person who makes a pact with the Devil and who submits to the diabolical will in order to have an essentially negative power over the population. It was a massive operation of the Devil to form a counter-church or organize sabbaths. (meeting where satanic, often sexual acts were performed)

How did the charges start to slip and when?

At the beginning of the 14th century, the charges and sanctions were very individual, we could not really speak of repression.
That said, from the 15th century, in 1440 in the Dauphiné, we begin to see collective accusations and villages denouncing each other.
The public adheres to the satanic image that the church gave to witchcraft.
Around the second half of the 16th century, Germany was known for its great witch hunts.

Was there a clear trigger?

As mentioned earlier, the trigger was really the propaganda of the church on the satanic image of witchcraft.
The church being very important in terms of preaching and education
The witch hunt was a factor in the success of Church education, anything that was not religious engendered suspicion.
The trials were carried out by secular powers, especially in the border areas to ensure order and establish the power of the King on his territory while giving a pious image to the royalty.

The stake was really the only way to punish witchcraft?

The bonfire was indeed very majority.
A female criminal was often killed by fire, as witchcraft was a crime of heresy. The sanction of the stake was therefore “purifying”.
There were a few cases of imprisonment, but the image of “fire purifying evil” made burning the main punishment for witches.

Why more accusations of female witchcraft than male?

In the 15th century, the witch hunt concerned both men and women. The feminization of witchcraft was not very visible.
It was from the end of the 15th century that witchcraft became predominantly feminine.
Women at the end of the Middle Ages are the ones who bring the child into the world, they are also the ones who accompany in the nursery, that said ¼ of the children die before their 1 year.
The hunts accelerate from the moment birth is increasingly medicalized by men. It was a way of ostracizing women.
“Society was misogynistic, woman was considered inferior to man in law, more susceptible to her emotions than man and therefore more prone to succumb to the evil one.”

Are there still witches?

Currently, there are feminist movements that claim to be “witches” to highlight the persecution of women, especially in the United States.
There are also satanic sects. Which are more philosophical cults than cults having a “satanic god”.

How are they perceived by scientists?﻿

These movements are mainly studied as spiritual and militant movements studied or as religions or social movements.

Presentation and perception of witches through time