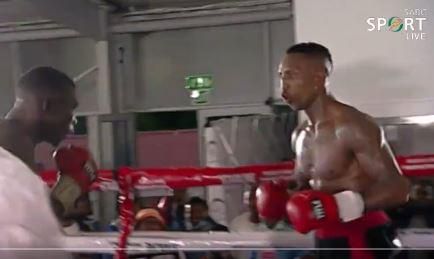 Images of Simiso Buthelezi boxing in a vacuum have gone around the world. Accused of murder on social networks, his opponent thinks of suicide.

Last weekend, Siphesihle Mntungwa was pitted against Simiso Buthelezi in a fight for the WBF African lightweight title. After ten rounds completely dominated by the South African, it was he who fell into the ropes. Then when he got back to his feet, his opponent inexplicably walked to the opposite corner of the ring and put to boxing in the void.

These images have been around the world as they are impressive.

A CT scan taken directly after the encounter revealed brain damage and internal bleeding. Simiso Buthelezi, who was in a coma, is finally died two days later.

Following this tragedy, Siphesihle Mntungwa is now accused of murder on various social networks. “As soon as Simiso was hospitalized, I was strongly criticized. I can not stand it anymore. I have only one option left, and that is to kill myself. Even my neighbors send me the most horrible messages, I’m no longer safe, “commented the boxer to the Sowetan Live.

But Mntungwa is keen to defend himself and specifies that they fought fairly in a simple boxing match and not in a fight to the death: “But I did not kill Simiso. All I wanted was to win this title, to maybe help change my life and the life of my family.

The South African also explained his very precarious living conditions. He is the only one working in his home. He has to support his younger brother, his aunt and his children. “My mother died when I was four, my father is still alive, but I have almost no contact with him. This title was supposed to be a financial boost, but now, in people’s eyes, I’m a murderer. While I could also have lost my life there.”

Mntungwa’s trainer confirms his colt is at rock bottom: “He’s struggling to put up with accusations online. People make a fuss about it and claim we used witchcraft. Obviously, that’s not true. We are mostly afraid. We don’t even dare to attend the funeral”, explains Mmeli Mkhize.

The Federation calls for an investigation

The South African Boxing Federation has commissioned an independent medical investigation. She could explain how a seemingly light blow could have had such consequences. Simiso Buthelezi hardly took any hard hits throughout the ten rounds. Doctor Buyi Mabaso-Dlamini, who treated the victim in the minutes following his knockout, has his idea. “It is possible that he injured himself before entering the ring. It can also be the result of injuries accumulated over the years.

Boxer deceased: Accused of murder and witchcraft, his opponent fears for his life