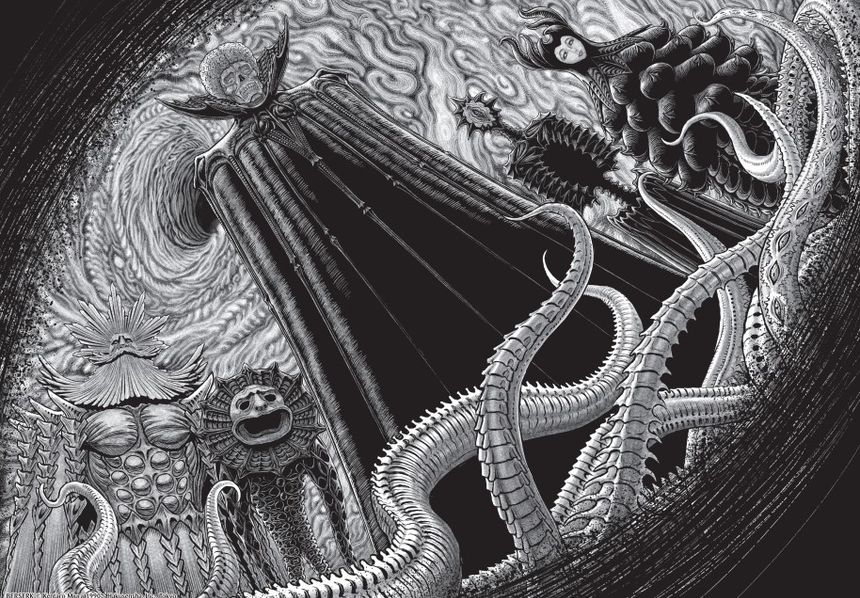 A black cape, a giant sword, a mechanical arm, a piercing gaze, he is called the black warrior. We don’t really know who Guts is in the first pages of volume 1. A solitary warrior on a crusade? Without a doubt. Kentaro Miura does not say so explicitly. He just slips you the universe in which his hero finds himself: dark fantasy. “To put it simply, dark fantasy is The Lord of the Lambs with a half-medieval and half-fantasy universe, where humans can cohabit with marvelous creatures” explains Laurent Duroche, journalist at Atommagazine specializing in manga. “Dark fantasy is a darker, gothic, wild and horrifying version.”

It is necessary to pass volume 2 to discover the childhood of Guts. He was born into violence. He was raped as a child (sold by his father to a mercenary for a few coins). When he finally manages to break away from it, he meets the troop of Falcon mercenaries headed by a certain Griffith with an androgynous physique. “There is a homo-erotic relationship between the two characters. Griffith makes no secret of it.” According to Laurent Duroche, there is no rejection from Guts, there is a fascination for Griffith, a questioning.

In this relationship, will slip a woman, Casca, of the troupe of the Falcon. From the duo, we will move on to the love triangle, the challenge of this saga. Berserk, it’s also a story of power, that of an incredible armor that resembles that of Batman. Story of an ambition. What are we ready to do, to sacrifice to establish our kingdom? In this medieval world where witchcraft has its place, it is also a question of religion, heretics, apostles, demons. Kentaro Miura distils his explanations over the chapters and when he says too much, he does not hesitate to remove one to leave the reader free to imagine who is who, who does what. Berserk is sheer madness.

Berserk reference in the manga universe and beyond

As always in the secret manga universe, there is a subtext. Berserk started in 1989 is the work of a life with which Miura will merge. Passionate about science fiction, he looked in books for his reference images, architecture and monsters. As such, he has created a fascinating bestiary. The resulting violence is beyond anything. “It’s not just torture porn to go further than the neighbor. It serves the purpose.” Sullivan Rouaud, series specialist and collection director at Mangetsu states it: “It creates a rather fascinating background to the character, whatever one may say, because this character is born in violence and in war. It’s also linked to the time, at the end of the 80s, there was an overstatement , Miura wanted to participate in this race but justify it and create this character.”

Violence, Romance, Sex, Berserk is a series that goes to the end of all the obsessions of its author. It’s a Game Of Thrones before the hour. It is also a reference in the world of video games. The creators of Final Fantasy 7, Dark Soulsand Elden Ring drew on Berserk to create their games. Kentaro Miura died before completing his series. We now know that his best friend, Koji Mori, will continue the work and therefore give us, we hope, the keys (Falconia, the Casca – Guts – Griffith relationship etc…) But Koji Mori warns: “I would only write the episodes that Miura told me about. I wouldn’t deviate from that.”

Berserk at Glénat. Please note this is for an informed audience.