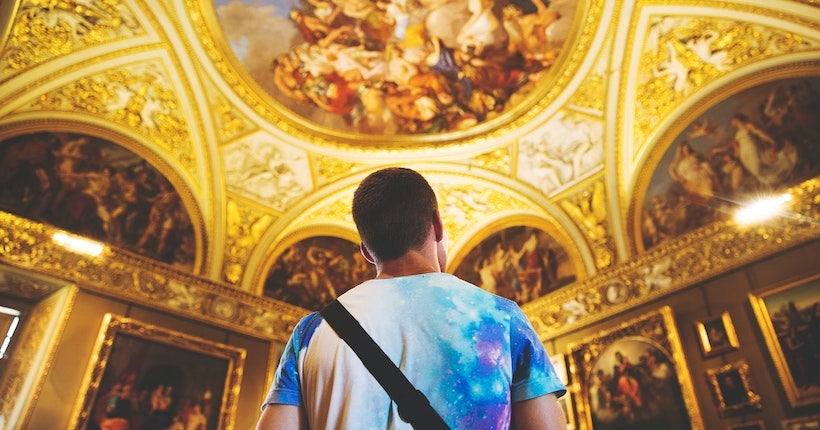 Have you ever felt palpitations in front of a work of art? Started to sweat profusely at the precision of a face painted five millennia ago? Failed to pass out in front of the beauty of an architectural gem? Perhaps you even started to hallucinate as the successive visits to museums touched your heart? If so, you may have suffered from Stendhal syndrome, an illness theorized about thirty years ago by an Italian psychiatrist.

The affliction takes its name from the French novelist, author in particular of Red and Blackwho in 1817 described the emotions felt during his visit to the Basilica of Santa Croce, in his autobiographical account Rome, Naples and Florence. Head thrown back, eyes fixed on the frescoes of the cupola of the Niccolini chapel, he arrives “at this point of emotion where the celestial sensations given by the Fine Arts and passionate feelings meet. Coming out of Santa Croce I had a heartbeat, life was exhausted at home, I walked with the fear of falling”.

Undoubtedly disturbed by this reading, the psychiatrist Graziella Magherini spent twenty years studying similar cases. She draws from it a book, published in 1989, in which she popularizes the name of “Stendhal syndrome” – sometimes also called “Florence syndrome” since the expert specifies that it is in this Italian city, which “concentrates the most Renaissance works in the world”that occurs number of cases.

His book The Stendhal syndrome reports the cases of 107 people who experienced mental disorders after admiring Florentine works. From the end of the 1980s, and while Graziella Magherini’s book had not yet appeared, the newspapers began to speak of the syndrome in question.

In May 1989, the New York Times detailed, for example, the story of Lucy, a 22-year-old woman “not Italian”who had begun to hallucinate after a few days of visiting Florentine churches and the Uffizi museum: “She started imagining that she was seeing angels and could hear them singing. She was convinced that she was the reincarnation of a nun buried in Umbria. She couldn’t remember the name of the village but was sure she could get there if left alone”then reported the newspaper.

Regions of the world spared

According to her studies, Graziella Magherini estimated that the syndrome did not affect everyone, but rather “people living alone and having had a classical or religious education, regardless of their gender”summarizes an article from the journal Hegel. The tourists “from North America and Asia do not [seraient] not touched” because’“it’s not about their culture”. Neither do local Italian tourists, because on the contrary, the latter have the chance to bathe “in this atmosphere since their childhood”.

If any work has the potential to cause palpitations in tourists, it would seem that a huge David (4 by 6 meters) exhibited in the Accademia Gallery causes discomfort and palpitations in a handful of people every year. The guards of the museums of Florence would even be trained to intervene with these specific cases caused by an overflow of the sublime.

The magazine Geo points out, however, that “some professionals qualify these symptoms, considering that a succession of visits between outdoor places and closed places can also cause discomfort or dizziness”. The syndrome is not part of the Diagnostic and Statistical Manual of Mental Disorders.

The small number of cases studied by Graziella Magherini and the interrogation concerning what can cause the symptoms evoked (heat, crowd, somatization, ground perhaps already unstable in the subjects, etc.) cause doubts to persist. In the meantime, continue to experience strong emotions in the face of the beauties of art and go and see if the vision of a photography by Zanele Muholi literally knocks you over.

But what is the mysterious Stendhal syndrome?