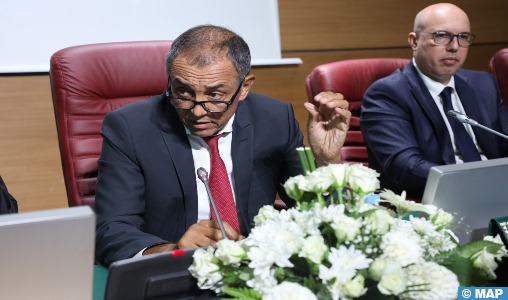 Tangier – The Economic, Social and Environmental Council (CESE) organized, on Thursday in Tangier, a meeting dedicated to the presentation of its opinion entitled “What urban dynamics for sustainable coastal development?”, chaired by Ahmed Reda Chami, president of the Advice.

This communication meeting, held at the Habous administrative and cultural complex in Tangier, took place in the presence of the Wali of the Tangier-Tetouan-Al Hoceima region, Mohamed Mhidia, the governor of the province of Fahs-Anjra, Abdelkhalek Marzouki, the President of the Regional Council, Omar Moro, the Director General of the Agency for the Promotion and Development of the North (APDN), Mounir El Bouyoussfi, and representatives of government sectors, public establishments, elected councils, international bodies, research establishments and civil society, as well as heads of decentralized services and members of the EESC.

It was an opportunity to present the interest of the subject of urban dynamics and coastal development, the opportunities and challenges related to the Moroccan coast, the structural constraints hindering urban planning and the Council’s advocacy for sustainable urbanization. of the coastline.

Speaking on this occasion, Mr Reda Chami underlined that this meeting, the first of its kind outside the EESC headquarters in Rabat, is part of the implementation of the Council’s strategy based on the openness to the various territorial actors, and aims to contribute to the implementation of the advanced regionalization project and territorial development, noting that the choice of Tangier to host this event is dictated by the place occupied by the city as an emerging metropolis which attracts numerous investments and large-scale projects.

This event takes place alongside the celebration in Tangier of Mediterranean Coastal Day and the launch of preparatory work for the development of the Regional Coastal Plan by the Ministry of Energy Transition and Sustainable Development, he continued.

The President of the Council also indicated that the Moroccan coast represents a precious territory endowed with considerable natural wealth, which knows the concentration of more than half of the population and contributes up to 83% to the national GDP and more 50% to job creation, noting that it is also a privileged center of infrastructure and economic activities, which generate a large part of the country’s wealth.

He considered that the coast in Morocco poses problems related to the degree of consideration of a sustainable approach in the management of this vulnerable natural environment, as well as to the increased anthropogenic pressure on this ecosystem, in a context of climate change. , noting that this situation can be explained by many shortcomings, in particular the shortcomings related to the management of the coast, such as public policies, in particular those related to land use planning and the multiplicity of stakeholders.

In order to remedy these problems, Mr. Reda Chami recalled that several measures have been taken, particularly at the normative level, citing, in this respect, the adoption of law 81-12 on the coast in 2015, which introduces the principles integrated coastal management, in compliance with Morocco’s commitments at the international level, in particular the Barcelona Convention for the Protection of the Marine Environment and the Coastal Region of the Mediterranean and its Protocol on Integrated Coastal Zone Management (ICZM ), and Decree No. 2.21.965 approving the National Coastal Plan (PNL) provided for by Law 81-12 and adopted in 2022.

In this regard, the President of the ESEC affirmed that the Council pleads for sustainable development of the coast in the sense of controlled urbanization ensuring a balance between the development, preservation and enhancement of this ecosystem, noting that the realization of Such a vision will significantly mitigate the growing pressures on this vulnerable ecosystem, strengthen the resilience of this environment and promote the effectiveness of environmental rights.

He noted that this opinion, drawn up on the basis of a participatory approach with all the stakeholders, is the result of a broad debate between the different categories that make up the Board, as well as hearings organized with the main stakeholders, in addition to a consultation launched on the digital citizen participation platform “Ouchariko”, indicating that citizens have shown great interest in the sustainable urbanization of the coast in its articulation with land use planning .

“Of all the citizens who responded to the survey launched by the EESC on the sustainable urbanization of the coast, 85% declare that they are dissatisfied with the state of the national coast, 81% support the need for a reform of urban planning policies , and 70% proposed to improve the applicability of urban planning documents”, launched Mr. Reda Chami, noting that the participants in the survey believe that four factors explain the dysfunctions at the level of the urbanization of coastal zones, namely namely the inconsistency of public policies (26%), the mode of governance and the multiplicity of actors intervening on the coast (26%), the ineffectiveness of town planning documents (23%) and the problem of land management ( 18%).

For his part, Mr. Mhidia said that the coastline of the Tangier-Tetouan-Al Hoceima region, which has two seafronts of 450 km, is an important element of economic growth and social and urban development, given that it represents a pole of attraction for investments, structuring projects and maritime fishing and tourism activities, noting that this vulnerable ecosystem faces many phenomena, including pollution, coastal erosion, overexploitation and illegal exploitation of resources, and the alteration of landscapes, which raises the issue of integrated coastal management.

The Wali of the region stressed that the integration of the environmental dimension and the need to preserve the natural environment are among the decisions taken in terms of local public policies and investment projects, through initiatives aimed at reducing the pollution and to protect the environment, in particular the generalization of wastewater treatment plants, the creation of controlled landfills, and the rehabilitation and reforestation of old landfills.

He called on all actors to actively engage to ensure that the regional coastal management plan sees the light of day as soon as possible, given its economic and ecological importance for an integrated and sustainable coastline.

For his part, Mr. Moro emphasized the existing relationship between the coast and urbanization on the one hand, and the economy and society on the other hand, at the level of the Tangier-Tetouan-Al region. Hoceima, in particular in the poles of Tangier and Tetouan, which are areas with high population density and subject to strong urban and economic pressure, affecting in one way or another the balance of the ecosystems of the region .

In this context, he urged the administrative, economic and territorial actors to take these particularities into consideration in decision-making, the programming of interventions and the proposal of projects, underlining the need to maintain the major balances between the coast and the environment. interior, through the revision of the distribution of economic activities and urban extensions, in order to ensure global, sustainable and balanced development.

As for Khalil Bensami, member of the Board, he presented a presentation in which he underlined that the Board proposes a series of recommendations articulated around two priority axes, namely the establishment of participatory, effective and efficiency of the coast, and the overhaul of the urbanization policy based on the principles of territorialisation, citizen participation, respect for fundamental rights and preservation of the environment and natural resources.

He noted that the ESEC emphasizes the need to ensure the proper application of the provisions of Law 81-12 relating to the coast, and to ensure its effectiveness, in particular by implementing planning instruments specific to the coast (LNP) and the preparation of instruments not yet developed to date (regional coastal plans), and to ensure optimal coordination between urban planning documents, territorial programs and sectoral policies on the one hand, and the law on the coast on the other part, as well as to rethink the governance and management of coastal areas, with a view to strengthening inter-institutional coordination, noting that this coordination can be ensured, in certain specific coastal areas, by special agencies (Marchica Agency).

Mr. Bensami added that the Council also recommends the establishment of a new generation of urban planning documents designed on the basis of an approach underpinned by scientific studies and the implementation of integrated management standards. of the coast, and the participation of civil society and the population in all stages of the process, through field studies, surveys, polls and public meetings, and the establishment of innovative and sustainable financing mechanisms to facilitate the implementation of town planning and regional development documents.

The ESEC also pleads for the improvement of the situation of constructions located in the public maritime domain or in the 100-metre strip prohibited from construction, noting that this would notably involve a reform of the legal framework in force on the temporary occupation of the public domain of the State.

It should be noted that this internal request aims primarily to alert on the need to safeguard the Moroccan coast against the dynamics of ongoing degradation. It is then a matter of initiating a reflection likely to ensure the sustainability of this ecosystem in the face of the risks resulting from both anthropogenic pressures and the consequences of climate change.

Tangier: The EESC presents its opinion on the sustainable development of the coast | MAP Express


Find here our social media accounts as well as other related pageshttps://nimblespirit.com/related-pages/

Take an extra 40% off the sale at Lulus for Labor Day weekend - CNET - ApparelGeek
The Quebec plan to eradicate English
'The Bling Ring: Hollywood Heist': What is the Church of Religious Studies, the church Andrea Arling...
Tweet
Share
Share
Pin