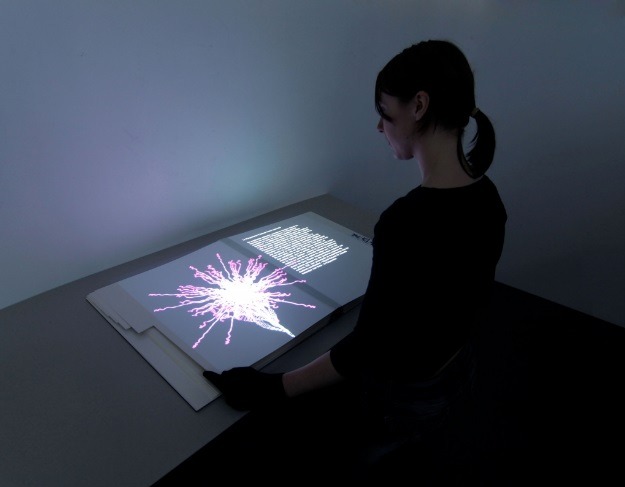 The exhibition Les Choses – A story of still life at the Louvre Museum welcomes Miguel Chevalier to discover herbarius, digital avatar of the herbarium, a generative and interactive virtual reality installation. From October 12, 2022 to January 23, 2023.

Miguel Chevalier will present Herbarius (Evolution), digital avatar of the herbarium. The work still has the appearance of a book but which mixes real and virtual and presents texts and images generated in real time. On an album of twelve white sheets are projected side by side a fractal flower which blooms and a text written thanks to artificial intelligence.
Page after page, fiction is omnipresent. Herbarius (Evolution) is a hymn to hybridization. By its roots, it is part of tradition, but by its technology, it is radically modern.

We, the objects, a few, tonight, we are going to break our silence. We have things to tell you. »
Christine Montalbetti

The still life finally regains the honors of a major Parisian exhibition, 70 years after the last retrospective at the Orangerie in 1952. Conceived by Laurence Bertrand Dorléac, this exhibition d’auteur offers a new vision of this genre long considered minor and whose French title, born late in the 17th century, has never satisfied anyone. The expression “still life” does not take into account a very lively genre, which is basically an arrangement of things in a certain order assembled by the artist.

This carte blanche brings together nearly 170 works, on loan from more than 70 of the most prestigious institutions and private collections.
A monumental work by Cameroonian artist Barthélémy Toguo, The Pillar of Disappeared Migrants, is also displayed under the Pyramid, as a prelude to the exhibition. In a walk in fifteen chronological and thematic sequences, the works, representing all media (from painting to video, via sculpture, photography and cinema), dialogue with each other, beyond time and geography, down to modern times.

The representation of things, of which we find testimonies from prehistoric times, offers a wonderful dive into history. The artists were, in fact, the first to take things seriously. They recognized their presence, made them alive and interesting by exalting their form, their meaning, their power, their charm, seized their ability to shape our fears, our beliefs, our doubts, our dreams, our desires, to our follies.

The exhibition intends to re-establish a dialogue between this genre perceived as outmoded and the public: the still life is one of the powerful artistic evocations of sensitive life. Because human beings live with things and are attached to them, because things occupy a decisive place in lives and imaginations, still life says a lot about us and has a lot to tell us. It tells of our relationship with material goods, which are not reducible to their materiality but which are charged with meaning.

The last great demonstration around the still lifeStill life from antiquity to Twentieth centurywas organized in 1952 in Paris by Charles Sterling, curator at the Louvre.
This exhibition pays homage to this great art historian; it is however not a question of a remake, but of starting from our knowledge and our contemporary mentality. The point of view integrates everything that has renewed representation techniques and perspectives, both in the history of ancient and contemporary art, and in literature, poetry, philosophy, archaeology, anthropology, science or ecology.
Expanding chronological and geographical boundaries, the exhibition opens windows to other cultures that depicted things in majesty, including when they were no longer shown for themselves in the Christian West – from the 6th to the 16th century. . She revisits the genre of still life, in the perspective of the eternal dialogue between the artists of the present and those of the past, in a permanent renewal of the gaze: from prehistoric axes to Duchamp’s readymade, passing through the astonishing arrangements of Arcimboldo, by Clara Peeters, Louise Moillon, Zurbarán, Chardin, Anne Vallayer-Coster, Manet, De Chirico, Miró, Nan Goldin, Ron Mueck and many others.

The representation of things by artists is imbued with a wide variety of practices and ideas, beliefs and feelings, which inspire the movements of society as much as they echo them. Within a recognized even hackneyed code, the simplicity of things invites artists to unheard-of formal freedoms.
The genre of the still life must also be reconsidered in favor of the contemporary attachment to things as well as to the new relationships that are established between the living and the non-living.

This exhibition necessarily contains today’s concerns: ecological challenges, the new rights of animals and things (of forests in particular), while certain persistences, such as that of the theme of Vanity, reveal profound anthropological truths.

The diachronic structure chosen for the itinerary of the exhibition has the advantage of highlighting the turning points in the history of representations. It also manages the necessary connections between works from different periods. Three periods are particularly conducive to the abundance of things represented: Antiquity, the 16th-17th centuries and the 20th-21st centuries.

In our talkative world, artists invite us to pay attention to all that is silent and tiny. By giving form to the things of life and death, they speak of us, of our history since time immemorial: of our attachments, our fears, our hopes, our whims, our follies. This exhibition is dedicated to their representations. It opens onto the dialogue between the works of the present and those of the past, between our mentalities of today and those of our ancestors.

This exhibition invites us to dive into the heart of the things represented since the beginnings of humanity. Artists were the first to take things seriously. They recognized their presence, their existence. They made them alive and interesting by exalting their form, their meaning, their power, their charm. They have grasped their ability to make us imagine, think, believe, doubt, dream, act.

These things thus make us reflect on the state of our world where everything holds together: objects, animals and humans. Their representations raise the question of the increasingly blurred boundary between what is a thing and what is not, between the living and the non-living. They speak of abundance and scarcity, materialism and belief.
Painters, sculptors, photographers, filmmakers or videographers bring us into the singular universe of those things that have been in turn, throughout history, despised, admired, feared.

Curator of the exhibition : Laurence Bertra Dorléac, art historian, with the collaboration of Thibault Boulvain and Dimitri Salmon.

Herbarius at the Louvre Museum