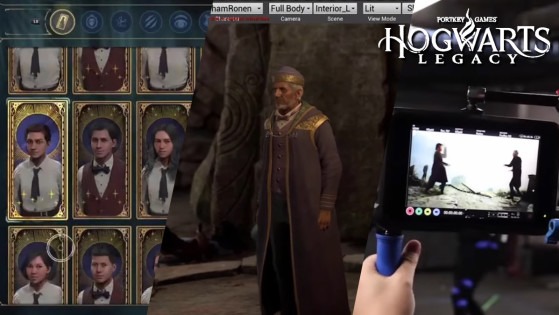 Like every week, the official Twitter accounts of Warner Bros Games, Chandler Wood (the community manager) and the game deliver us some new images and video clips to keep us waiting until the release of Hogwarts Legacy: Hogwarts Legacy. A release date that we still do not have elsewhere and which is long overdue. Scheduled for the end of 2022, we can however be satisfied with all this new information in the meantime. This week, it was particularly necessary to pay attention to the Autodesk conference an hour that revealed some secrets about the game. But another post also deserves a two-minute look.

Phineas Nigellus Black, the character creation editor, new cinematic… Hogwarts Legacy Hogwarts Legacy still has no release date and yet information is flowing about it! During an hour-long internal conference, unpublished news was revealed!

After a clip showing us the North Tower of Hogwarts castle, this new video extract presents the famous Divination Tower within it. It is an emblematic place of the Harry Potter saga since it is in particular there that the Professor Sybille Trelawney taught Harry, Ron and Hermione to read the future in crystal balls and teacups. On the wall, there are a few paintings including one with a Nifleur. The small table is adorned with a few books and a divination ball, but the most intriguing thing is of course this ladder which takes place by magic to indicate to us that it is possible to climb upstairs (or go down where we are). In short, it seems that it is simply access to the class.

As you know, Hogwarts Legacy will not take place at the same time as Harry Potter (1990s) but rather in 1890, i.e. 100 years earlier. A period not so distant as that since many emblematic characters of the saga can already be born (like Albus Dumbledore for example who will return to Hogwarts in 1892) or ancestors of famous teachers like Phineas Nigellus Black, the back-back -Sirius Black’s grandfather. This is also confirmed: we will have the right to meet twin ancestors of the Weasleys but also famous ghosts like Peeves, Nick-Quasi-Sans-Tête and Professor Binns.

Why stop there? One of our dear Professor Trelawney’s best-known ancestors was none other than her great-great-grandmother: Cassandra Trelawney. She was especially famous for her very rare gifts of clairvoyance that few wizards and witches really possess (Grindelwald, Sybille are among them).

So we can expect to see this famous Cassandra in Hogwarts Legacy, either in one of the villages surrounding Hogwarts, or in the school directly as a teacher who knows?

In a new clip from Hogwarts Legacy Hogwarts Legacy, we can identify what might be the most powerful evil witch of all time. The gameplay between good and evil is likely to be very interesting!