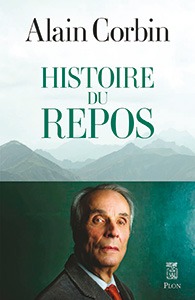 ” As a child, I remember this formula often heard: “Do not disturb him, he is resting.” A form of gravity surrounded these moments. We knew, however, that the person concerned was not sleeping. So what was she doing? This questioning serves as a springboard for Alain Corbin for a dive into the abysses of time. What does a man do when he rests? And have the meanings attributed to rest changed throughout history? In this gem of scholarship, the author shows that rest has a history, from mystical tranquility to ” station wagons of our contemporaries through the sum of the peasant of yesteryear. One can study its variations as so many culture wrecks », witnesses of buried sensitivities.

Rest was first identified with salvation in the hereafter. For nearly a thousand years, he experienced himself in paradise, among the angels, between the Father and the Holy Spirit, after a life of labor. Christians lived tense in expectation of this eternal rest, to the rhythm of sermons and requiem (Latin: rest). In the classical age, a shift occurs: rest is no longer just beyond, but in itself. It is tranquillity, an obsolete notion, which deeply colors mentalities. Teresa of Ávila praises the tranquility of the soul, whose duty is to “ do nothing but gently and silently even if it means putting knowledge aside. God wants ” the soul becomes silly »…

The notion of rest becomes tinged with ambivalence over time. Against Thérèse, Bossuet already denigrates tranquillity, which, according to him, resembles a form of letting go and can lead to shipwreck. At Montaigne, rest is once again gaining recognition. It essentially concerns women and men who have lived and must, from a Stoic perspective, forge their rest ” before dying. Rest is equivalent to withdrawal; it presupposes the cessation of all activity and worldliness. The individual must refocus on himself, tighten in oneself », « marry nothing but yourself “. The philosophers and moralists of the 17e century extend this idea by making rest the antonym of social unrest. ” All the misfortune of men comes from a single thing, which is not knowing how to remain at rest in a room. “Writes Blaise Pascal in a quote that has gone viral thanks to the recent confinements.

However, is it really in a room that we really rest? On the contrary, Jean-Jacques Rousseau disorients the rest in the heart of nature, a prelude to a new variation. With his solitary walks, the philosopher invents a modern discipline: “ empty oneself “, walk in nature, surrender to the sensations of the wind, water, let yourself slide on a boat ” without bothering to think »… A sign of the times: at the same time, the first English resorts appeared on the shores of the Mediterranean.

At 19e century, rest changes status again. We invent the three-eight: eight hours of work, eight hours of rest, eight hours of sleep. Rest ” brings together in bundles the notions of health, fatigue, well-being writes A. Corbin. It is gradually becoming political with the synchronization of rest times, paid holidays, the triumph of beaches, deckchairs and idleness.

And today ? ” Leisure replaces rest. It occupies its time and invades its space “Judges the historian. Reading it, however, one cannot help but think that rest is still on the move, and that its ancient meanings still stratify the meaning attributed to it. To collect oneself, to avoid annoying things, to walk or to lie down, to make oneself available to oneself or to empty oneself, to seek solitude to better refocus, to repair oneself in one’s being: the quest for regeneration is universal.

Hail to the hammock