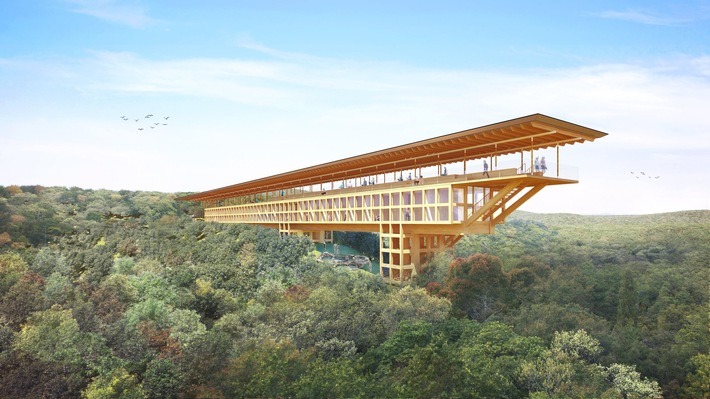 The jewels of Japanese architecture in Japan and Switzerland

enthusiasts
of contemporary architecture will find their happiness in many places in Japan. For example on the island of Awaji, where Shigeru Ban’s latest masterpiece has recently inspired aesthetes around the world. The “Zenbo Seinei” temple of well-being and meditation rises above the trees and reveals a spectacular wooden structure. But to begin with, while waiting for Japan to open up again to tourism, it is possible to admire the buildings built by Shigeru Ban and his colleagues here. The works of many renowned Japanese architects are present in Switzerland.

“Treetop Zen” promises Shigeru Ban’s new masterpiece on Awaji Island, easily accessible from Kobe City. The Pritzker Prize-winning architect recently designed a meditation complex that impresses with its 100-meter-long perspective overlooking a fragrant cedar forest. In addition to the wellness program including healthy cooking, tea and incense ceremonies, and many other Zen rituals, the use of wood and the abundance of natural light are intended to harmonize body and soul. spirit of the hosts. For the construction, Shigeru Ban used renewable materials and local raw materials. His buildings impress with their simple elegance, they appear light and are flooded with light. Like the spectacular headquarters of Swatch in Bienne or the building of the Tamedia group in Zurich. Creating ” Zenbo Seinei», Shigeru Ban once again experiments with wood as an imposing load-bearing structure.

At Zurich Airport, Riken Yamamoto designed “THE CIRCLE”, the largest and most expensive building in all of Switzerland. It brings together several elements such as offices, hotels, conference rooms and shops in a monumental whole, and thus evokes a Japanese metropolis. Like Yokohama, for example, whose urban landscape Yamamoto helped shape, among other things, with ” ROTUNDA– a residential and multipurpose building from 1987. Fans of Japanese architecture in Switzerland will not be able to miss the Novartis Campus in Basel: two very big names have left their mark there: Tadao Ando and Fumihiko Maki. The first, a great master of minimalism and exposed concrete, always aspires through his constructions to a symbiosis with the natural environment. Its triangular laboratory on Fabrikstrasse 28 fits perfectly into the campus. In Japan, the best example of this current is Ando’s “architecture of silence” located on the artistic island of Naoshima. Fumihiko Maki designed the Square 3 administrative building for the Novartis campus. He is also one of the masters of Japanese modernism. Maki’s “Spiral House” in Tokyo’s trendy Omotesando district or the MoMAKthe National Museum of Modern Art in Kyoto, which he also designed, attract travelers eager for design and architecture.

International trajectory: from Tokyo to Vals

Photos of another Japanese construction have been circulating the world recently: the national stadium for the Olympic Games “Tokyo 2020” created by Kengo Kuma. During these games, postponed for a year due to the Coronavirus, the oval construction made a strong impression on the screen. The framework is intended to recall the Gojunoto pagoda near Nara, and its wooden elements convey warmth and a pleasant atmosphere. The renowned architect has created a similar atmosphere for the ” 7132 House of Architectsin Vals. The room he designed, clad in Swiss oak panelling, envelops guests who spend the night there like a cozy cocoon. This hotel also offers a few doors further, a room created by Tadao Ando which is a true homage to Japanese tea houses. He too celebrates a Japanese-inspired aesthetic at the Thermes de Vals.

A short guide to Japanese architecture for Switzerland and Japan:

… and some important creations by Tadao Ando in Japan

… and constructions of Shigeru-Ban in Japan

… and the creations of Kengo Kuma in Japan

…. and the masterpieces of Fumihiko Maki in Japan

… and Riken Yamamoto in Japan,

The Japanese National Tourist Office (JNTO) was established in 1964 to promote the development of Japanese tourism. Based in Yotsuya, Shinjuku-ku, Tokyo, JNTO is involved in various national and international activities. The goal is to make tourists from all over the world want to come to Japan. JNTO operates 24 overseas offices around the world.

Press release: The jewels of Japanese architecture in Japan and Switzerland