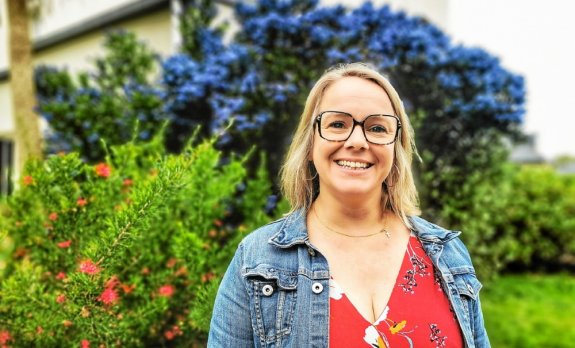 
“In the wind of the stone moors, around the lakes, it’s for the living, a bit of hell, the Connemaraaaaaa”. One day Marina sang Connemara with one of her patients in the palliative care ward. He wanted it furiously and she couldn’t refuse: it was a bit like a last wish and it had to be a nice moment. “We even laughed, we could be heard even in the hallway of the service! “, remembers the Naizinoise who, after eight years spent in this unit, piles up happy memories. Because yes, far from the clichés, palliative care turns out to be a place where you sometimes laugh very hard and where life throbs with all your heart. “It’s even the liveliest hospital department! she assures.

A lemon Perrier on the beach

Life. This fucking life, sometimes eaten away by cancer. A disease that is found in nine out of ten cases in the palliative care department of Kério. For Marina and her colleagues, it is then a matter of relieving pain, combating nausea, overcoming fears. And offer, why not, some last pleasures. Like allowing this veteran “to receive his military medal before he dies”. It is up to this woman “to see her garden one last time before leaving”. To this passionate about the arts “to go to an exhibition in Lorient”. And to this dad to live his dream by “going to drink, for the first time in his life, a Perrier lemon on the beach with his children”. It was on the sand of Pléneuf Val-André. To life, to Armor.

names in the newspaper

But the last pleasures of a life have a price. 400 or 500 € to pay for the trip of an ambulance to the beach or the house, in particular. So Hemera, a Pontivyan association that works to improve patient comfort, finances them. Marina is treasurer and on the accounting lines, she sees donations from families, mayors, the League against cancer, the hospital, and La Pontivyenne, this race against cancer which will cross the city this weekend. .

Marina has already raced it but the sport is not her hobby. Her thing is sewing. She even makes three-quarters of her clothes. For fun, but not only: “this activity allows me to get away from work, it’s my therapy, my meditation”. Because often, in palliative care, you have to take it upon yourself. “We sometimes bond with people who die a short time later. We open the newspaper and presto, on the funeral page, we see their names… There are days when it’s complicated”. There are days when you don’t always sing Connemara.

Guardian angel of dying lives,? Marina is one of those everyday heroines who give a helping hand to those who may not see tomorrow. “Working in palliative care is not fun, but it’s not sad either”, assures Marina who knows the richness of this unit, which is particularly well endowed in terms of personnel. This also allows some wonderful attentions. “The gentleman with whom I sang Connemara is finally dead. So in his mortuary room, we gave him this song. Marina was no longer there to dance in his arms. But it was just like.

In Pontivy, as long as there is life with Marina Becker