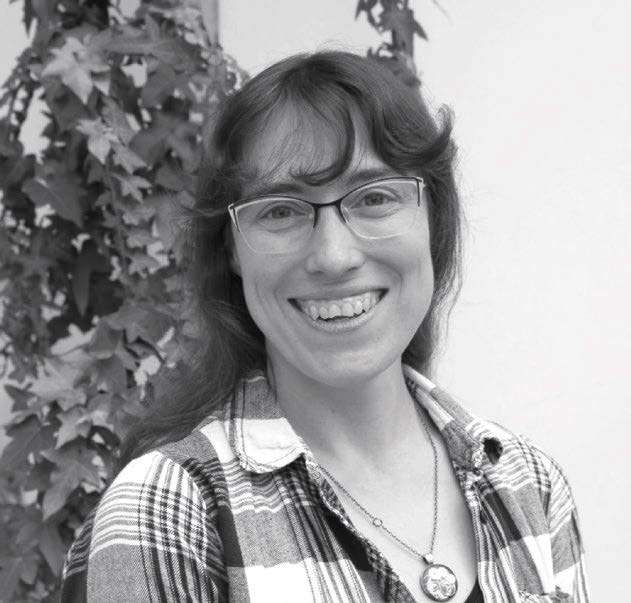 The bones of these animals are easily moved in the layers of sediment, complicating the work of archaeologists. It does not know how to fly, yet it invaded the world in a few thousand years… Today, it is the most widespread bird on the planet: there are three specimens for each human being. A total of 22 billion chickens, hens roosters and other domestic chicks – these are indeed the ones we are talking about – gossip on Earth, all from the species gallus gallus, better known as the “golden rooster”. The spread of chicken throughout the world, a real odyssey, has long remained an enigma. But now in this year 2022, after an intense archaeological investigation, two international teams of researchers have finally managed to better trace it.

The story of the hens

The story begins in Asia. The hen is then a wild animal, living in the heart of a hostile jungle – hard to imagine! Its encounter with humans can be sketched out thanks to the remains unearthed in archaeological sites and which can be dated by stratigraphy, by estimating the age of the geological layer in which they rest. Until now, two main theories were confronted: some scientists pointed to northern China as the place of domestication, while others located it rather in south-east Asia. But there was a problem: it’s easy to confuse bones – remains discovered in China a few years ago actually turned out to be those of pheasants – and, even more so, chicken bones are small and fragile, so easily moved through the different layers of sediment. The dating method lacked reliability.

>> Read also: The strange affair… cetaceans in the Seine

The researchers then resumed the work from scratch. They re-evaluated 600 archaeological sites in 89 countries, re-examined the bones, their stratigraphic position, and combined these observations with zoogeographic data. Some 23 bones from Europe and northern Africa, the oldest presumed to date, have also been radiocarbon dated. This mass of information was then cross-referenced with iconographic, written and linguistic archives, all cultural sources mentioning the hen. Tedious work… which paid off! The oldest chicken bones have thus been located in central Thailand, at Ban Non Wat precisely, alongside other remains of domestic animals such as pigs and dogs.

Attracted by grains of rice or millet, the golden rooster would have come out of the jungle to get closer to humans – OPHELIA LEBRASSEUR Archaeozoologist at CNRS and Toulouse III University

It is therefore in Southeast Asia that this descendant of the dinosaur was domesticated. A more recent event than estimated: the hypotheses assumed that the meeting between hens and humans had taken place some 10,000 years ago… except that the remains would only date from 3,500 years ago! “A very interesting coincidence emphasizes Ophélie Lebrasseur, archaeozoologist at the CNRS and the University of Toulouse III. This date coincides with the emergence of dry rice cultivation in the region, which could have acted like a magnet: attracted by grains of rice, millet or insects linked to agriculture, the golden rooster would have come out of the jungle where it lived to get closer to humans. ”

Then everything accelerated: gallus gallus has begun an epic that we can begin to outline (see map) . Under human influence, the species reached central China, southern Asia and Mesopotamia from the end of the 2nd millennium BC. Via sea routes, Greek, Etruscan and Phoenician traders then transported the bird across the Mediterranean. “There is a link between the displacement of populations, the commercial exchanges that are woven between increasingly distant regions, and the circulation of the species. points out Michaël Seigle, archaeozoologist associated with the Archéorient laboratory (CNRS), who participated in the research. It is likely that eggs were a valuable source of fresh produce for merchants during their travels. ”

Especially since the hen, much smaller than today, was easy to transport. She had already changed a lot in contact with humans: a study published in 2008 showed that if current hens take the vast majority of their genome from the golden rooster, one of their genes, called “yellow skin”, would come from the species Gallus sonneratii, still present in the wild in India. Most likely conclusion: a hybridization event would have taken place, possibly encouraged by humans. Moreover, an Egyptian text from the 2nd millennium BC mentions birds imported by Pharaoh Thutmose III giving birth every day. A characteristic that our current domestic hen possesses. Except that his ancestor only laid eggs during a limited period of the year! “Which tends to show that humans had already selected the most fertile specimens” concludes Michaël Rye.

But, be careful, this does not mean that gallus gallus was a source of food! It is perhaps even the most surprising discovery of the researchers: several indices tend to show that originally, the hen was not necessarily consumed. If the use of eggs remains difficult to estimate – the shells are very poorly preserved – the skeletons of hens have been found many times unscathed, without trace of butchery.

It is only from the 8th century. before our era that the hen finally landed on European soil. gallus gallus then gradually joined the center of the continent, and it would take another millennium before reaching Scotland, Ireland, Scandinavia and Iceland. “Nothing suprising says Michaël Rye. The acclimatization of the hen, animal from the hot, humid forests of Asia, in the cold temperatures of the north may have taken time. ” Still, the species shows a remarkable ability to adapt!

It seems, in this conquest of Europe, to retain its sacred aura, at least for a time. The animal was surely considered an exotic, rare and revered curiosity, offered as a present and cared for: “One of the oldest hens found in England bears the marks of a correctly healed broken leg” , notes for example Ophélie Lebrasseur. On the mainland, hens were originally buried alone, and several specimens have been buried alongside human bodies: hens with women and roosters with men, perhaps with the aim of guiding souls to the afterlife. And the Romans, they attributed to the bird a power of divination!

Still, human appetites eventually caught up with it… Under Roman influence during the Iron Age, in particular, gallus gallus is spreading more and more on the plates. Archaeologists are observing an increase in remains in the archaeological record. A still enigmatic taste twist: perhaps by spreading, the animal has simply lost its prestige. Then a second explosion in the consumption of chicken was observed during the Middle Ages, when the order of the Benedictines prohibited the consumption of four-legged animals during Lent.

The hen, which stands proudly in two, no longer escapes the saucepan.

The story is not over yet: during the 14th century. , the hen continued its conquest of the islands of Oceania (Easter Island, Polynesia, etc.), then landed in Chile and spread to South America. In the fifteenth century. , it accompanies European settlers on their expeditions and reaches North America. Finally, during the 20th century. , she undergoes her most intense transformation: her body mass is multiplied up to five times due to human influence. “To reboost the economy of the avian and poultry sectors after the Second World War, and in the face of competition from cow and pork meat, the objective is then to create an individual capable of feeding an entire family” explains Ophelie Lebrasseur.

The end of this epic is certainly somewhat tragic… Which does not prevent certain hens from still sailing with humans to discover the world. Monique, for example, wintered with the sailor Guirec Soudée in Greenland in 2015, spun across the Arctic Ocean in 2016 and reached Antarctica in 2018. The hen has pawed on every continent… Next step, the space ? 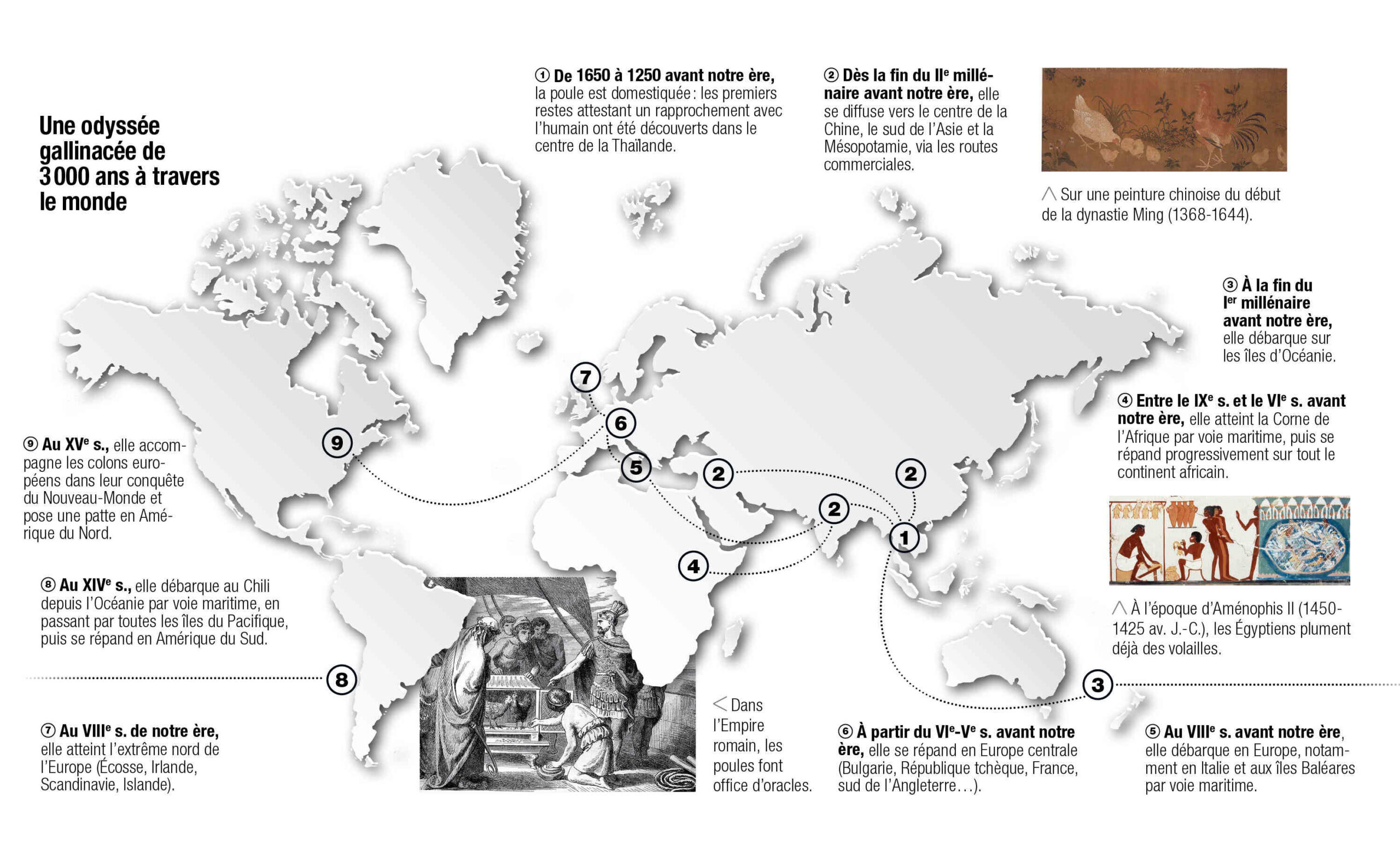 1 From 1650 to 1250 BC, the hen is domesticated: the first remains attesting to a rapprochement with humans were discovered in central Thailand.

2 From the end of the second millennium BC, it spreads towards central China, southern Asia and Mesopotamia, via trade routes.

3 I At the end of the millennium BC, she lands on the islands of Oceania.

4 Between the 9th c. and the sixth century. Before our era, it reaches the Horn of Africa by sea, then gradually spreads over the entire African continent.

5 In the 8th c. Before our erait lands in Europe, notably in Italy and the Balearic Islands by sea.

6 From the 6th-5th c. Before our era, it is spreading in central Europe (Bulgaria, Czech Republic, France, southern England, etc.).

7 In the 8th c. of our era, it reaches the far north of Europe (Scotland, Ireland, Scandinavia, Iceland).

8 In the 14th century, it lands in Chile from Oceania by sea, passing through all the Pacific islands, then spreads to South America.

9 In the 15th century, it accompanies European settlers in their conquest of the New World and establishes a foothold in North America.

The goose! For a long time, it was the hen that was awarded this title. Except that a study by the Japanese University Kana-zawa, published in March 2022, came to reshuffle the cards. Researchers have discovered around 200 goose bones at China’s Tianluoshan archaeological site, south of Shanghai. Their age has been estimated, by radiocarbon, at nearly 7,000 years, twice as old as the first domesticated hens. And several clues suggest that these specimens lived with humans: they fed differently from their migratory counterparts, and the researchers even noted the presence of juveniles. However, normally, no species of wild goose breeds in the region!