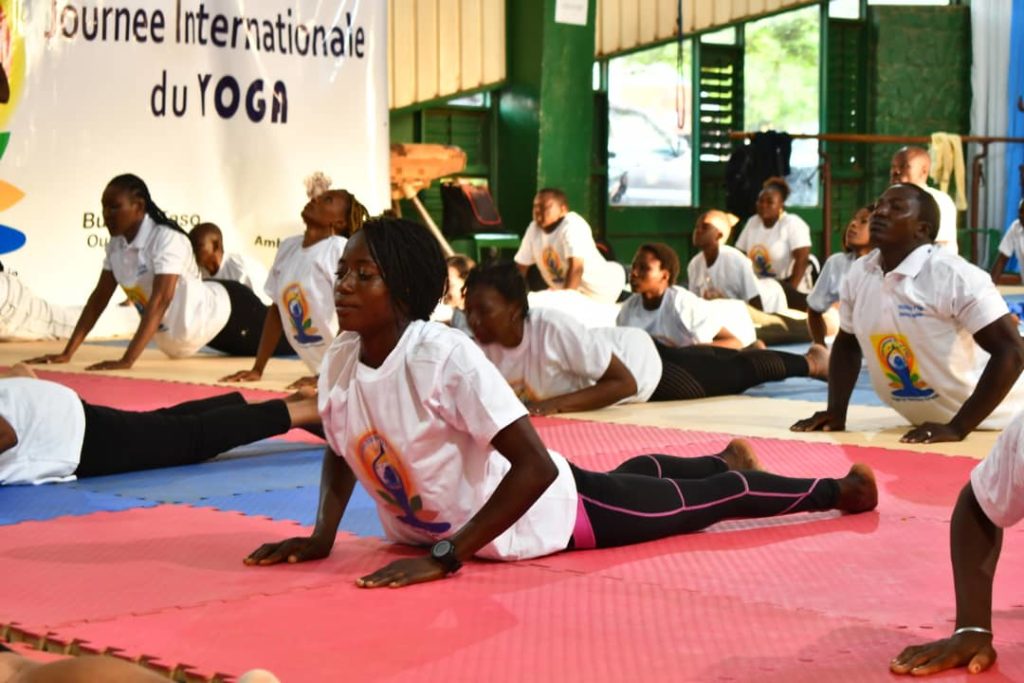 Hatha yoga, Yoga club in Burkina Faso celebrated the international day of this discipline on June 24, 2022 at the Institute of Sports Sciences and Human Development (ISSDH). Hatha Yoga has also launched wellness month in Burkina Faso.

Yoga is an Indian discipline that has many facets. These are demonstrations like the Elephant Walk. Students from the ISSDH skilfully performed it during this day of commemoration which brought together followers of the discipline.

About twenty masters teach yoga in Burkina Faso. The latter have been in the field for two years according to the Founder of Hatha yoga club Idriss Raoua Ouédraogo who indicated these yogist teachers.

In addition to the fact that it helps to strengthen the overall balance and overall health, by optimizing the functioning of the different organs and systems of the human being according to Idriss Raoua Ouédraogo. ” The fundamental element of this is the breathing technique. Often we breathe badly. And the best breathing techniques we can observe are those of the newborn “, he explains.

This is the eighth time that International Yoga Day has been celebrated in Burkina Faso. He praised the overall participation of the population, and the commitment of the government.

” What was most important was to work on presenting yoga as it was said by the Prime Minister of India Narendra Modi “, wished Idriss Raoua Ouédraogo.

The Director General of Leisure Vouhoun Tamini representing the Minister of Sports, Youth and Employment welcomed the opportunity offered by Hatha yoga club to Burkinabe youth to be able to learn the principles, rules and this wisdom of yoga.

The wisdom that this discipline teaches makes it possible to develop a certain formation through the demonstrations that he has followed. ” It helps in the formation of man. We are satisfied with what we had seen “, he notes visibly conquered.

Indian diplomat in Burkina Faso Chakraborty hailed Burkina’s “unconditional” support for the celebration of International Yoga Day over the past 8 years. “It is extremely heartwarming to see so many yoga enthusiasts performing here today. All credit goes to Idriss Raoua Ouédraogo and his team,” he acknowledged.

On the eve of this commemoration, Burkinabè yogists met at the Heroes’ monument in Ouagadougou to launch “The month of well-being”.

The chosen theme is ” self-care through physical activities “. For this first according to Mr. Ouédraogo, WHO Burkina wanted to support the initiative by asking young people from the ISSDH to deploy on the different axes of the city of Ouagadougou and to contribute to developing a little these physical activities of free way for people.

” We work with the ISSDH in this context. We have set up a team trained in the practice of well-being. It is a set of physical, breathing and relaxation techniques. These are exercises that are within everyone’s reach. “, specified Idriss Raoua Ouédraogo.

Born more than 2000 BC, Yoga has existed in Burkina for fifteen years. It is the essence of the ancient Indian tradition, yoga has nowadays become a cultural and sporting practice.

The 69e session of the General Assembly of the United Nations declared since 2015, the date of June 21 of each year, international day of yoga.

Yoga: The international day commemorated in Burkina for a healthy life and well-being