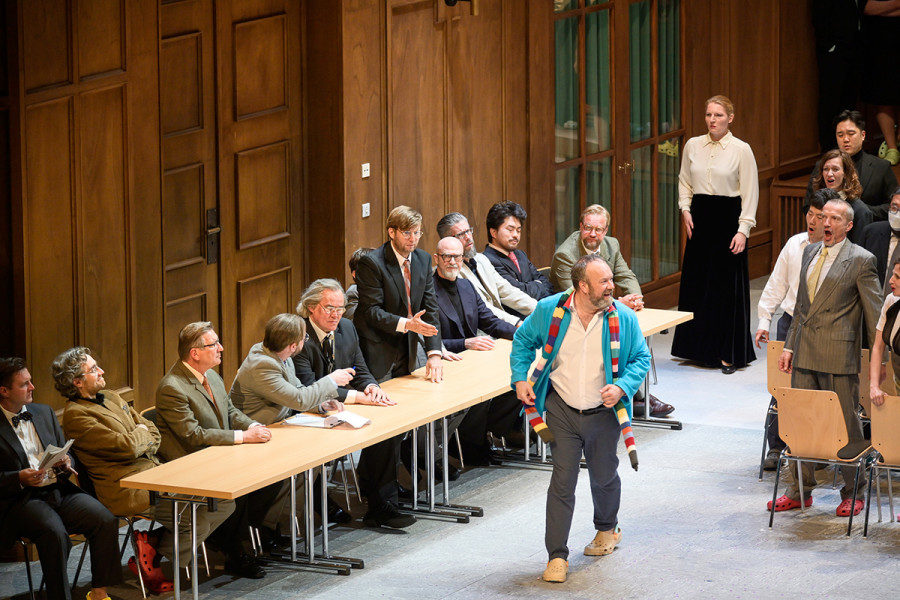 The trio Jossi Wieler, Anna Viebrock and Sergio Morabito seize the Mastersingers by Richard Wagner and transposes the action into a music conservatory, a high-level academy that promotes hierarchical relationships, unleashes aesthetic quarrels between “old” and “modern”, exacerbates rivalries, fuels a toxic, stressful climate linked to competition and performance requirements. This new creation is a total success. It exalts the burlesque tone of the opera and yet treats without prudery the violence and the embarrassing patriotism contained in the libretto.

The Masters – citizens, influential craftsmen and curators – are here singing teachers constituting a jury. The stage is populated by young student musicians, candidates for the competition, the staff of the school of which Pogner is the director. The latter promises the hand of his daughter Eva to the young artist who will win the singing competition. Walther de Stolzing, who loves Eva, therefore tries to win the test and become Meistersinger despite the difficulties and the rigidity of the composition rules imposed on the candidates. The noble Hans Sachs, who in this version is not a shoemaker – although he takes care of fitting all the members of the school with comfortable colored plastic Crocs – he is a drum teacher and physiotherapist within the establishment. He will use his ingenuity to help Walther, to give birth to his work and achieve victory, sincerely dazzled by his talent and originality.

The magnificent spaces designed by Anna Viebrock – hall, office corridor, auditorium with wood paneled walls – were inspired by the Munich College of Music, a place full of meaning and which resonates with questions of power, abuse , of toxicity since built and used under the Third Reich and whose pianist and rector was more recently found guilty of sexual assault.

The caustic humor of Morabito is very present when Hans Sachs appears barefoot and in shorts with his yoga mat or when he later sabotages the mini-concert given by Beckmesser. There reigns on the set a sweet madness, which makes one think of Marthaler, when Beckmesser, as a harsh judge, blackens and ransacks a Velléda painting during an audition, when the students mate and hug in groups during the night or indulge to a joyful and quirky dance on the evening of Saint John. A Shakespearean and nightmarish storm scene precedes the entrance of the public on the evening of the competition.

Klaus Florian Vogt radiates in the role of Walther. Philipp Jekal (Beckmesser) is an excellent actor, an irresistible clown. Announced suffering, he plays his role while Tom Erik Lie sings on the side. Johan Reuter shows all the complexity of a touching Hans Sachs, also in love with Eva, altruistic but also jealous, gloomy, angry (or desperate when he breaks a glass bottle on Walther’s head). We owe the directors a brilliant direction of actors, well-drawn characters, an original reading, precise and credible. The Deutsche Oper Orchestra is conducted by John Fiore.

Walther wins the contest and Eva’s hand. He doesn’t care about being a Meistersinger. The two lovers flee the party and the Masters. Sachs then becomes intoxicated through a nationalist and populist discourse that glorifies “German and true” art and warns against the dislocation of the people and the German empire.

Sachs is carried in triumph by the people of Nuremberg while the other Masters, his colleagues, are horrified, one on the verge of tears, the others petrified by irremediable, xenophobic and demagogic remarks which delight the crowd.

Yoga, Crocs, Wagner and populism at the Deutsche Oper in Berlin