This summer again, the Villa Vauban, in Luxembourg City, is offering a workshop combining art and yoga. An original activity to (re)discover the museum. Reportage.

This summer again, the Villa Vauban, in Luxembourg City, is offering a workshop combining art and yoga. An original activity to (re)discover the museum. Reportage.

Sitting cross-legged in front of a wall covered in paintings, a dozen or so students attend, concentrated, during “Yog’Art” at the Villa Vauban. For the past three years, the museum has opened its doors, in the evening, to art and yoga lovers for a workshop that is atypical to say the least.

Until the end of the summer, twice a month, Chahra Djennas proposes to associate painting with meditation. Obviously for this art mediator, passionate about yoga. “It’s a real invitation to disconnect,” explains the young woman, enthusiastic.

“A walk through art”

In black leggings and tank top, the thirty-something begins by setting the scene. “Close your eyes, focus on your breathing,” she begins in a soothing voice, against a backdrop of nature sounds. After a few postures on the ground, the young Luxembourger begins the explanations of three to four works in the small room devoted to French art around 1850. 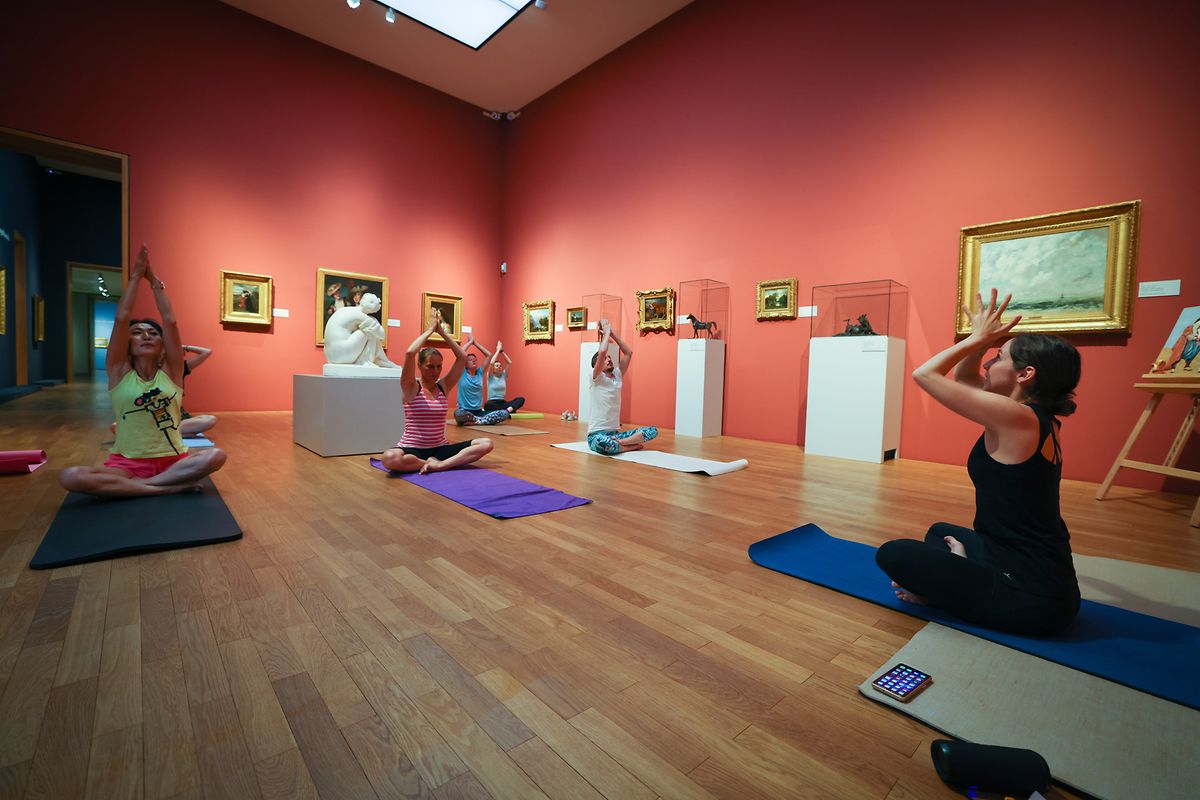 5:30 p.m., class begins. Chahra invites the students to relax, while the latecomers take their seats.

5:30 p.m., class begins. Chahra invites the students to relax, while the latecomers take their seats.

The students, concentrated, listen attentively to the young woman.

In English, Chahra details every move.

All of them, in the middle of the works in the small room.

Now the positions, the yoga teacher and art mediator draws their attention to the works.

For Vincent (here on the left), this course constitutes “a beneficial break in the week”.

Then comes the explanation.

For each session, Chahra chooses carefully what she will present, varying paintings, sculptures and engravings. Its objective is to enable participants to “better understand the act of creation” and to “approach the works differently”. With, always, the idea of ​​offering “a walk through art”, she specifies.

A walk that his students seem to enjoy, like Vincent. This “yogi” has participated in these sessions four times. For the 40-year-old, doing yoga in a museum is “inspiring” to say the least. “It’s changing!” Says, smiling, the one who admits to having passed in front of the museum for a long time without ever crossing its doors.

Although Luxembourg museums are favored by more than eight out of ten visitors, efforts are still needed to include people who are furthest removed from culture.

Besides, what he appreciates the most is the setting. “It’s a bit like having windows on different exteriors,” says this former art history student. As for the works, “it’s another way of seeing them,” he says. Because if the participants observe them from further away, they remain on the other hand “significantly longer in front”.

At the exit, the small group seems delighted with the experience. A “privileged moment” that most yogis of the day say they are ready to repeat, while 73% of residents, according to a recent Liser studysay they are not used to going to the museum.

For the latter, it is therefore a successful bet. By leaving the traditional framework, the structure attracts a new public. While reconnecting with one of its main objectives: to be a place of discovery.

August 08: From Royal Hands
August 22: So close to the sea

As the number of participants is limited to eight people, it is best to register in advance by telephone on +352 4796 4900 or by email.

This summer, every Saturday, we offer you a ride, on foot or by bike, through Luxembourg. This week, heading south of the country, to Schengen, the starting point of the brand new Moselle³-Trail.

Although Luxembourg museums are favored by more than eight out of ten visitors, efforts are still needed to include people who are furthest removed from culture.

Our tips of the week

With this sweltering heat wave now behind us, here is a selection of activities to plan to take full advantage of this weekend. On the program: a museum, a family outing and an event.

Mudam presents two series of new and recent works by the British artist.

This summer, every Saturday, we offer you a ride, on foot or by bike, through Luxembourg. First stage in the east, in Wormeldange, for a 25 km mountain bike circuit in a green setting.

Our tips for the week

Summer is definitely here, the school holidays are starting, so it’s time to relax. Here is our selection of the week: a museum in red thread, and a stroll along the water and the concert of a legend to complete the proposal.

The art of meditation comes to the museum