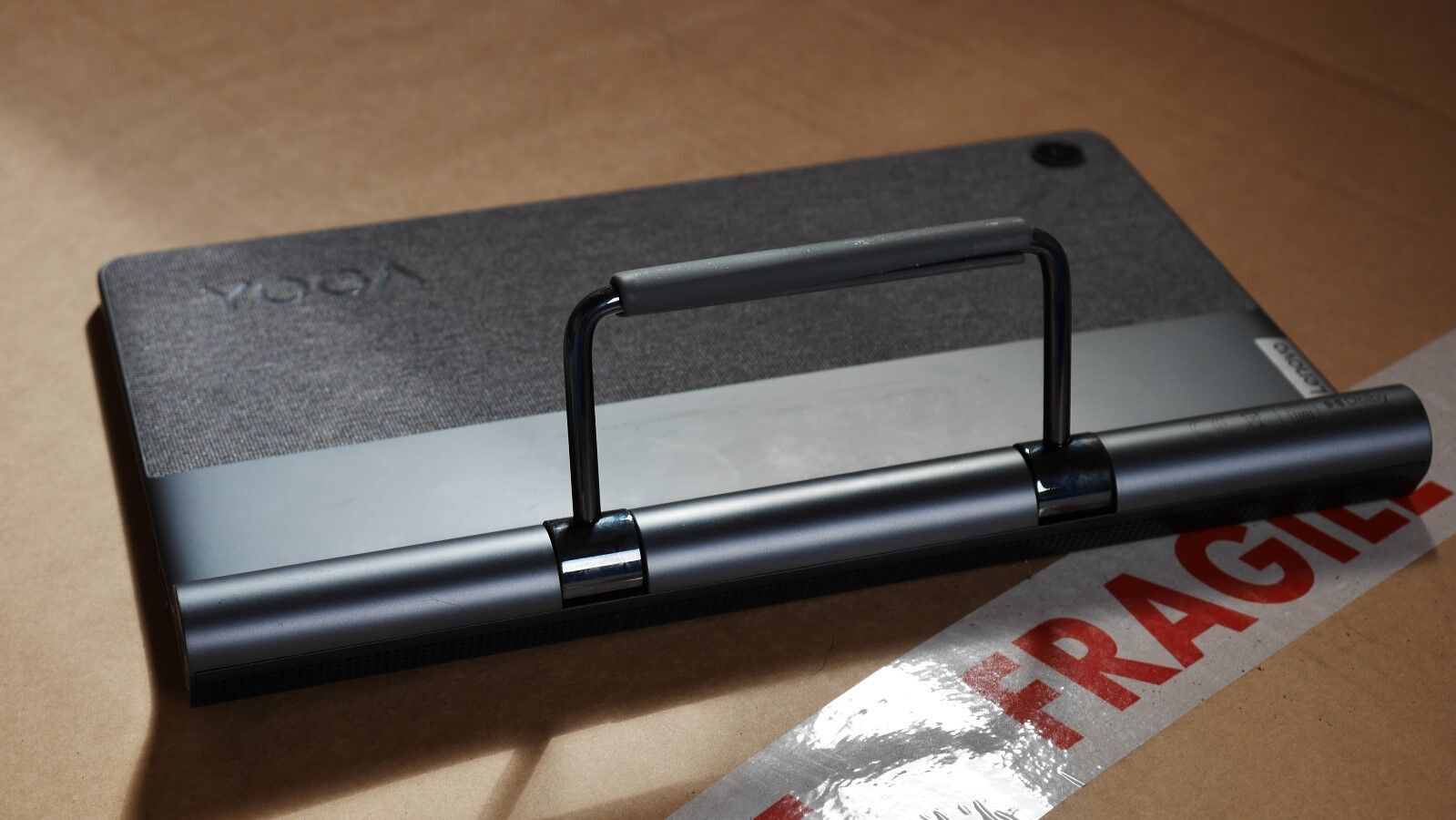 In 2022, Android tablets are making a comeback. After about five years of stagnation, competition is back. From Xiaomi to Samsung, from Nokia to Realme, it seems like every manufacturer is striving to build the perfect tablet.

Lenovo quietly brought them in and experimented more than most of its competitors, trying to not only find the best combination of components, but also the best design, for its various use cases.

The Yoga Tab 11 has a unique design on the market, except for other tablets of the “Yoga” brand, since it has a bump on the back, which houses a USB-C port, a power button , volume control, speakers and battery, plus a sturdy built-in stainless steel stand that can be rotated 180 degrees.

It’s a tablet that’s marketed as being able to adapt to any position, like a real all-rounder, and it costs just €399. But with stiff competition on all sides at this price point, does the Yoga Tab 11 do enough to merit a recommendation? Read our full review to find out.

Lenovo has been making tablets under the “Yoga” sub-brand for some time now, each of these devices featuring the same quirk: an ingenious “bump” put in place to conceal the battery, speakers and kickstand. This means that the weight is mostly in your hand when you hold it vertically.

The kickstand itself is constructed from aluminum and offers great strength across the board, meaning it’s possible to adjust it to your liking.

In general use, this means that the tablet stands perfectly on the lap, on a table or any stable and flat place. But where it takes on its full meaning is when it can be hung, whether on a wall, on the back of a chair or otherwise. Whatever the situation, the Yoga Tab 11 is more practical than many tablets, and without outside help.

While this design is a definite hit, the build quality is a bit less inspiring, unfortunately, and at 655g the tablet feels heavy in the hand. In general, the device feels solid, but if you put pressure on the case, it feels like it’s slightly deformed.

Combined with thin bezels and an angular design, that means the Yoga Tab 11 doesn’t feel the best placed to withstand life’s general onslaught. 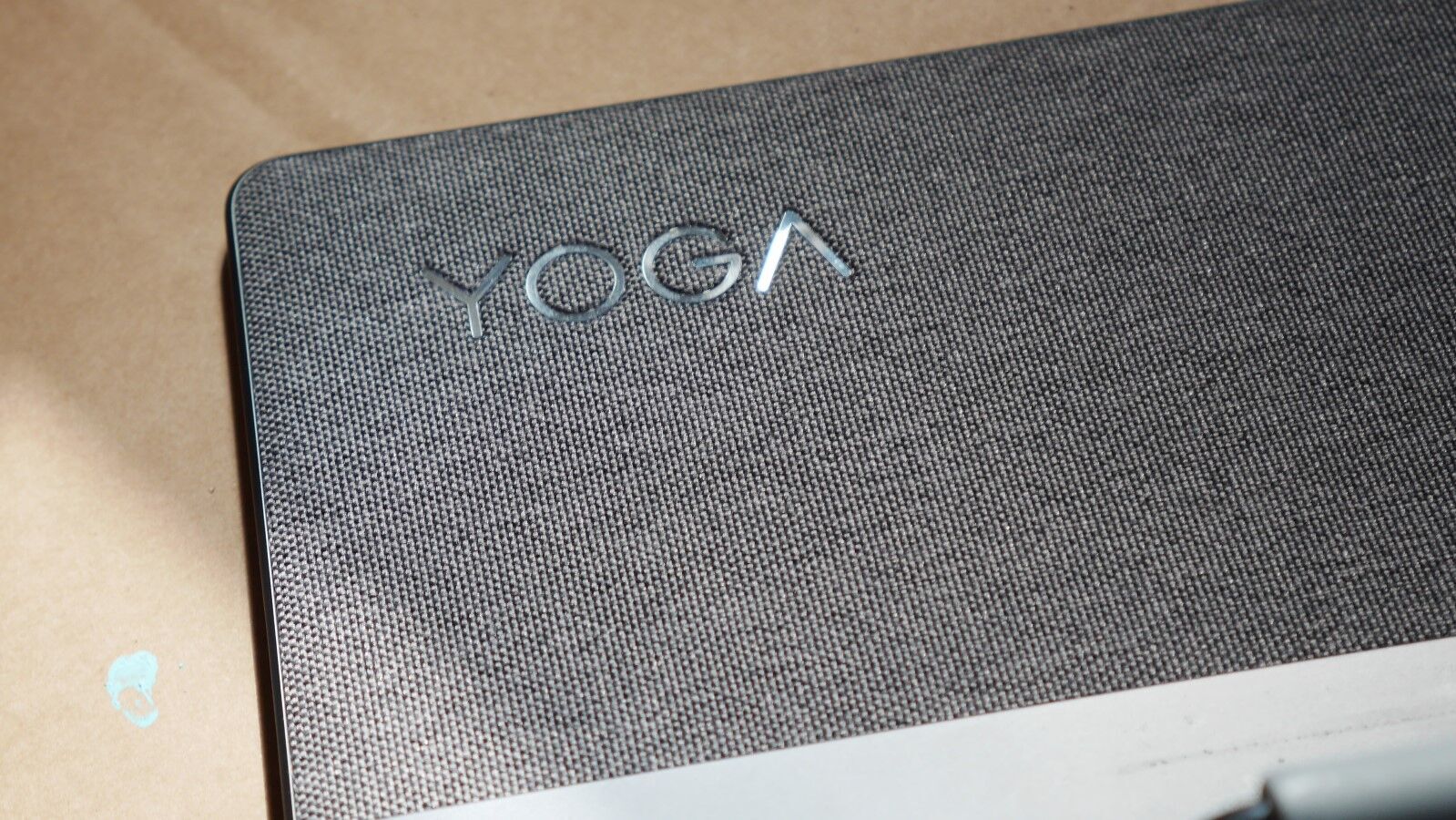 Its rear hump accommodates a single USB-C port for audio, data transfer and charging. No 3.5mm jack is present, which is an oversight on a device that’s primarily aimed at entertainment consumption.

Any tablet, regardless of design, is only as strong as its screen, and it’s somewhat unfortunate that the Yoga Tab 11 isn’t.

Its achievement here is its resolution, with its 2K you get a screen with razor sharpness to spare, meaning content appears crisp and clear no matter how far away you stand. This is certainly a good thing for video, but especially for those who like to read on their tablet, because everything remains perfectly readable.

From a color point of view, the positive impressions continue. As an IPS LCD, the Yoga Tab 11 may fall short of some OLED-equipped rivals, but we found the screen to be well-balanced. 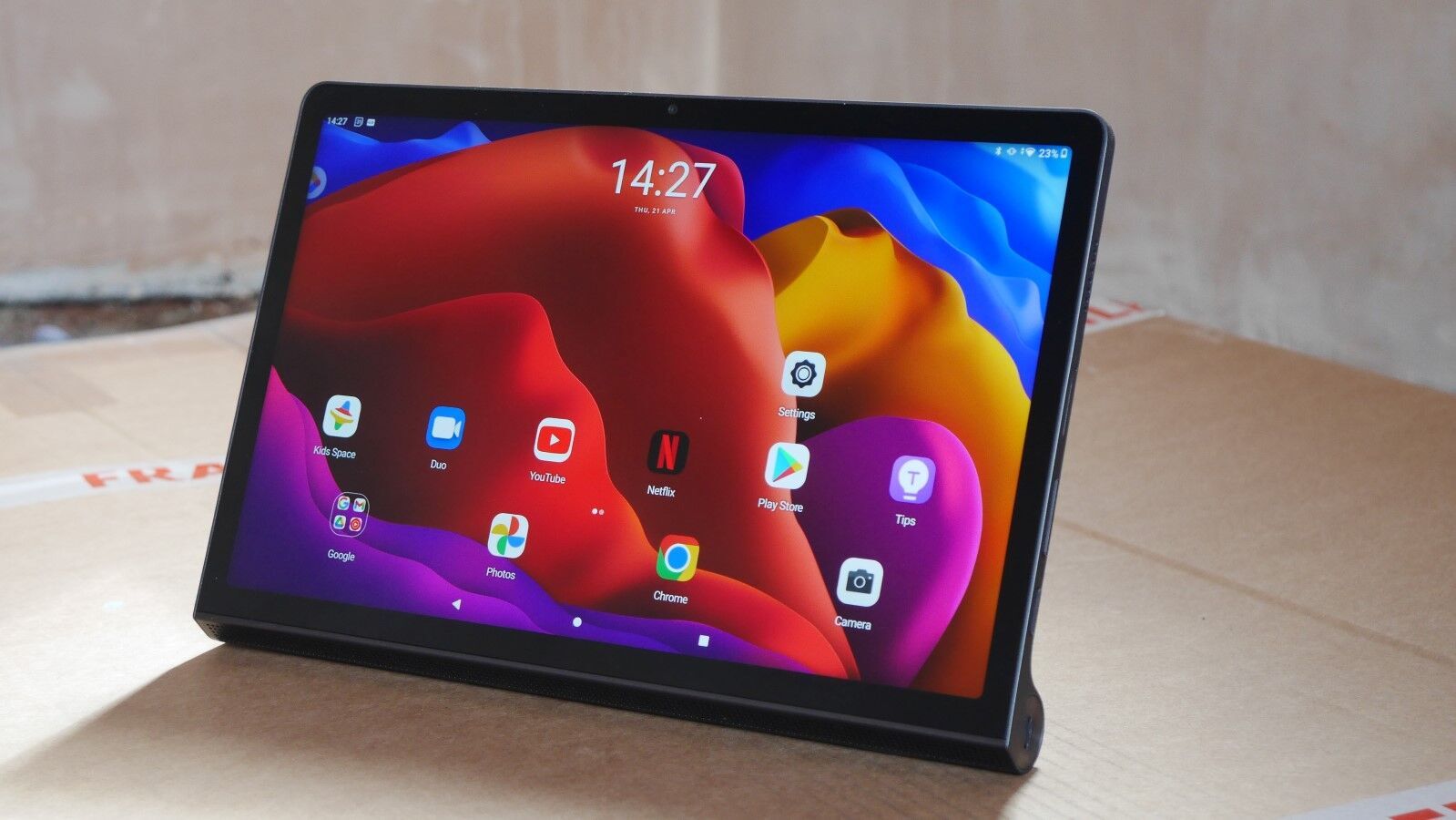 Its non-success concerns the refresh rate and the brightness. As for the former, the Yoga Tab 11’s display has a refresh rate of 60Hz. As the competition begins to move towards screens with faster refresh rates, this suggests that the Tab is slow and behind the competition, although this is rare for this price bracket.

Brightness is a little more problematic. The level of 400 nits is not enough for it to be usable in direct sunlight. While few prove capable of this feat, the problem on the Yoga Tab 11 is compounded by its relatively reflective panel, so its usefulness is somewhat limited as a result.

To end on a positive note, we were pleasantly surprised by its audio performance thanks to its four JBL speakers. With enough volume to fill a room, the sound on the Yoga Tab 11 is beefy, but not enough to replace a dedicated Bluetooth speaker. The bass is warm and round and there’s a hint of stereo separation.

It’s become a cliché to say it, but tablets are generally used to perform “tablet” tasks: watching TV, reading, browsing the web and maybe writing a Word document, they are more mundane in many ways than their smartphone counterparts.

That’s why manufacturers are focusing on areas other than pure performance, a trend that’s on full display on the Yoga Tab 11. With an octa-core MediaTek Helio G90T paired with 4GB RAM, it has enough power to accomplish most daily tasks without too much effort.

Navigating the interface and switching from one application to another is usually done without difficulty, even if this last action, in particular, makes the tablet hesitate. A version with 8 GB of RAM is available, which could probably solve this problem. 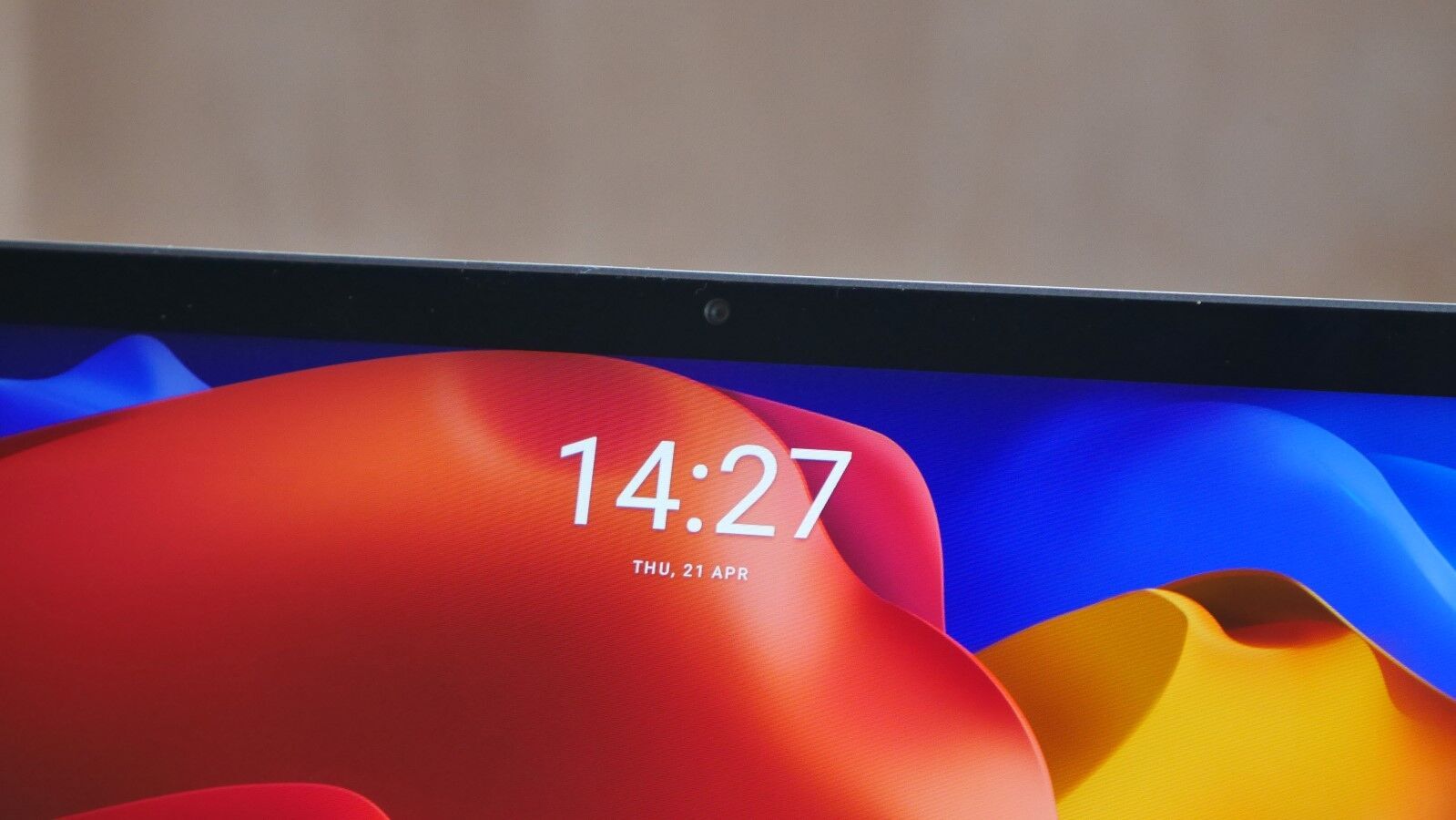 In benchmarking, the device performed similarly to the Snapdragon 845-powered Pocophone F1, both in single-core and multi-core performance. Which means it’s not quite as powerful as the best on the market today, but it has the ability to complete most tasks with relative ease.

Things change when it comes to gaming. Pushing a pixel-heavy screen while delivering high-level graphical fidelity proved to be too much for the tablet, especially on graphically intense titles.

Finally, an amount of 128 GB of storage allows to enjoy a lot of space to install applications and download videos, and the possibility of expanding the storage via microSD is increasingly rare but still very useful.

There is no tablet marketed with a high-end camera, and the Tab 11 is no exception to this rule. Equipped with an 8 Mp sensor at the rear with autofocus, and an 8 Mp at the front without, it has the bare minimum required in 2022. 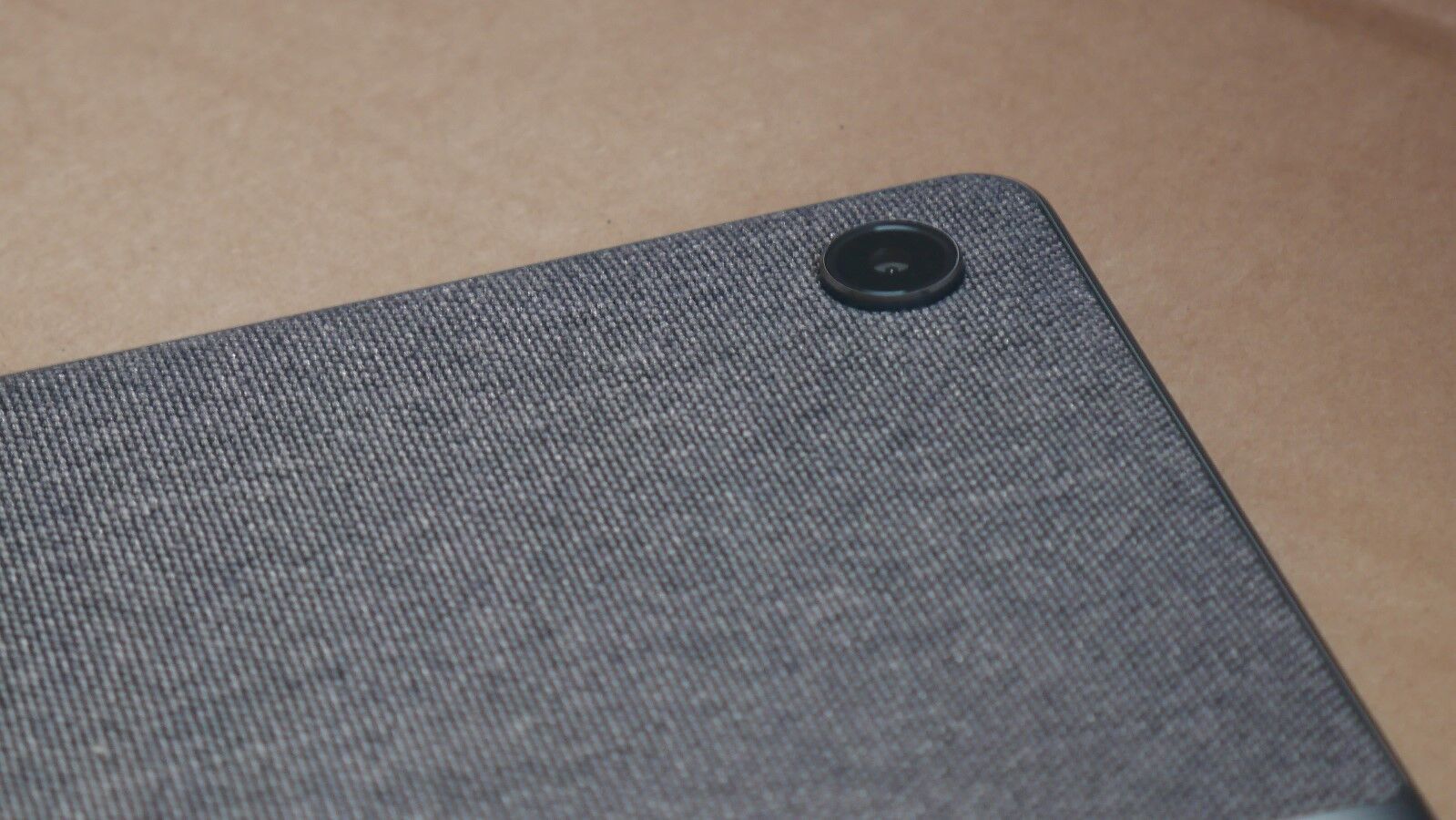 Unsurprisingly, the images from these two sensors are not particularly of good quality. Their main role is to take photos on the fly and enable video calls. For both of these use cases, they are quite adequate.

Likewise, dynamic range, detail, etc. aren’t their strengths, but for video calling in particular, the Yoga Tab 11 is satisfactory. 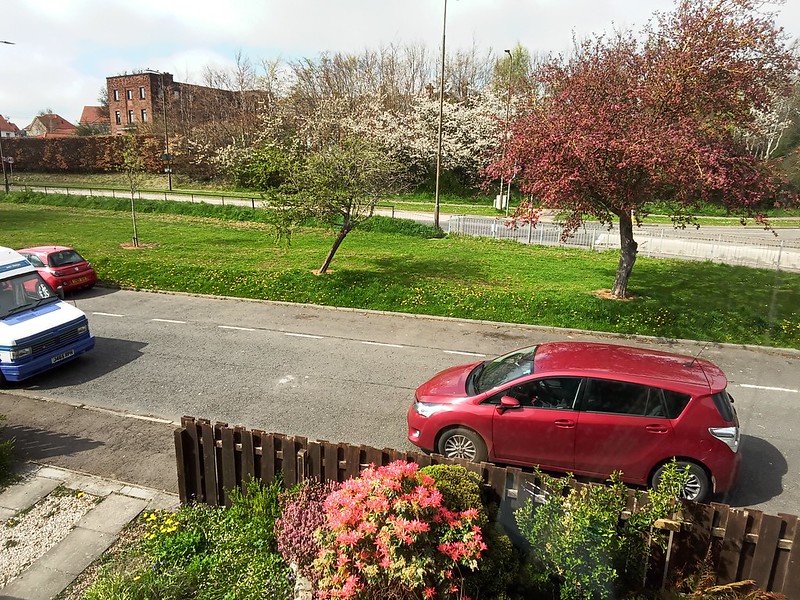 Although the Yoga Tab 11 tablets are mainly used at home, they need a long battery life to be recommended.

At 7500mAh, the battery isn’t the biggest on the market, but paired with a 60Hz display and a reliable processor, the ingredients are there for decent efficiency.

Using the tablet to browse the web, listen to music, watch videos and catch up on emails, it lasted around three days on average, with around two hours of use per day.

We’ve typically seen between six and eight hours of screen time, which is decent for a tablet. In our usual PCMark Work 3.0 test, the Yoga Tab 11 earned a respectable 9 hours and 17 minutes of battery life. 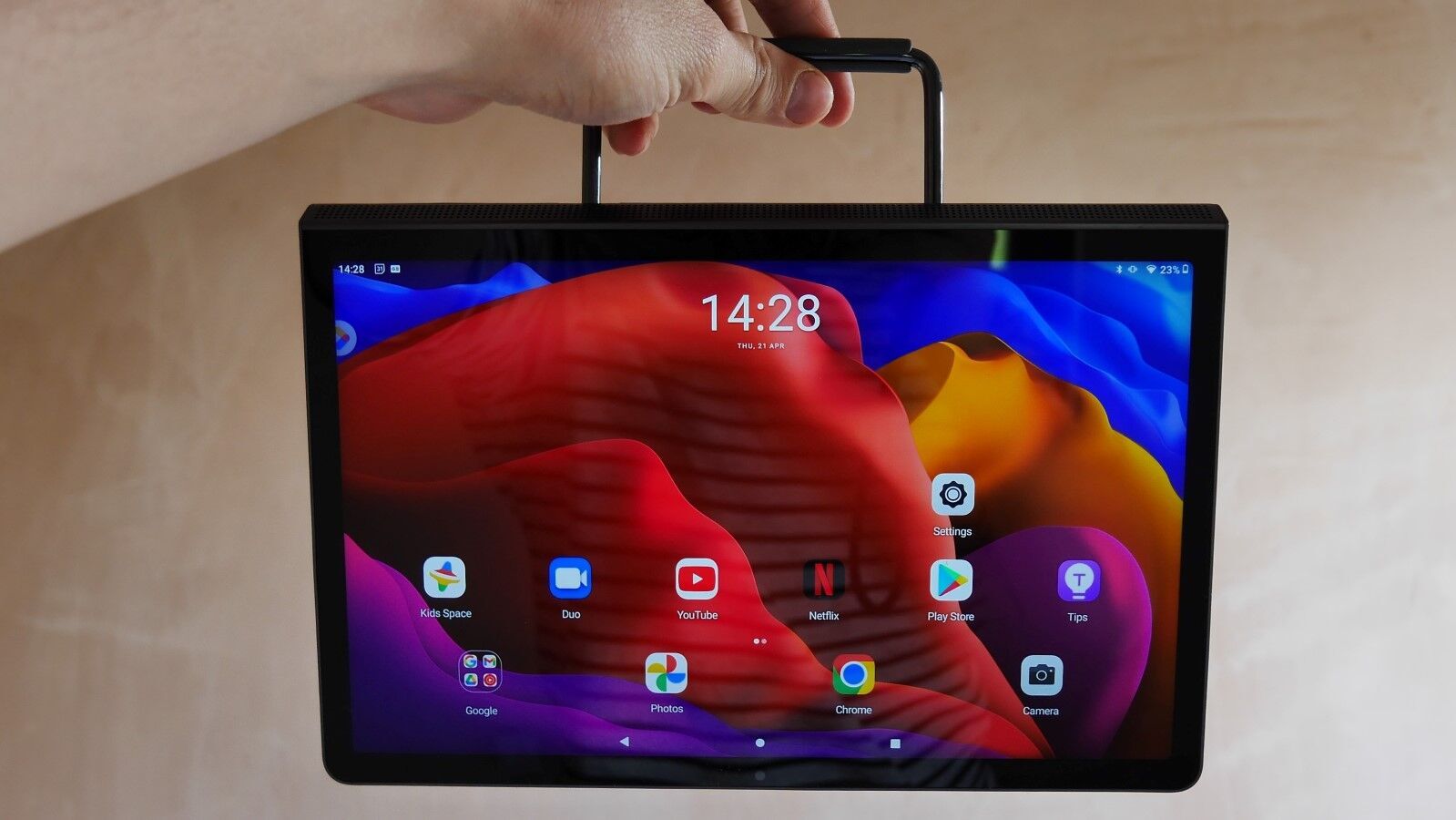 Luckily, with 20W fast charging, recharging proved to be a breeze. In 30 minutes, the Yoga Tab 11 could gain around 42% charge on average, which is more than enough compared to the standard 5 or 10W charging options.

Since the official launch of Android for tablets a decade ago, the platform has slowly but surely grown and matured. It’s only gotten better and better from its somewhat wobbly origins, but the sad truth remains that Android for tablets never quite lived up to Apple’s iPadOS.

We don’t mean by that that it’s unusable, as it certainly isn’t, but rather that there’s a lack of cohesion in thought and design. While an app on iPadOS will most often scale correctly, on Android it’s a matter of luck if it does.

Apps like Google Suite work well, but not for games and other apps meant to be used on a phone in portrait mode.

However, it’s clear that Google and Lenovo are thinking ahead. The former included its “Entertainment Space”, which aggregates content from various video apps similar to the TV app for iOS. As for the second, it has equipped the Yoga Tab 11 with its “Productivity” mode. 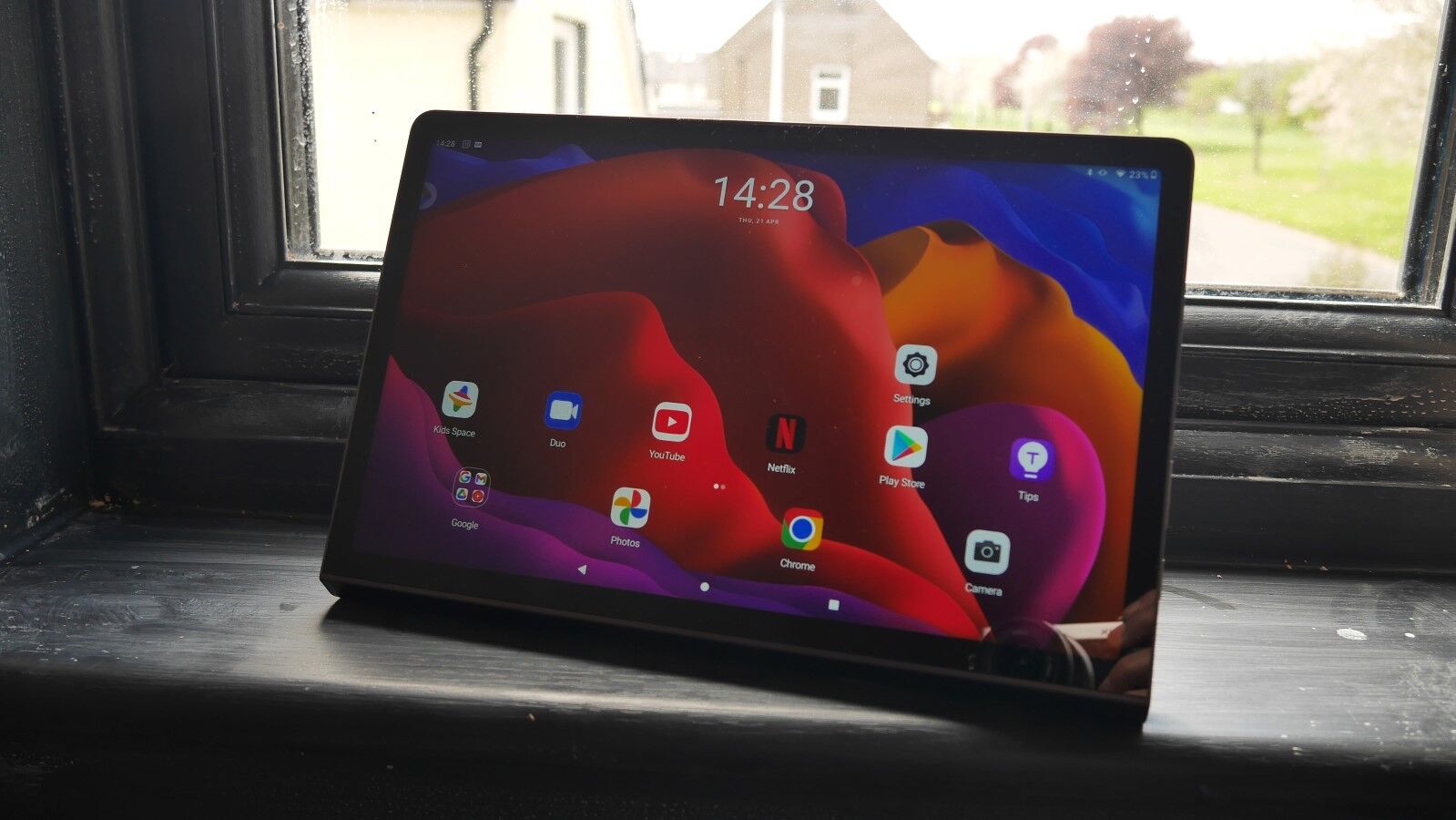 This mode is triggered when a Bluetooth keyboard or other such accessory is connected and changes the dock on the main screen, in particular. This allows the tablet to be used as a computer, bearing in mind all the caveats above regarding scaling.

Overall, the software on the Yoga Tab 11 is easy to ignore at best and an inconvenience at worst. It’s hardly a barrier, but with standard iPads priced similarly, those looking to use their tablet for work better look elsewhere.

Android 12L, a new version of Google’s operating system optimized for larger screens, is on the way, but it’s unclear whether the Yoga Tab 11 will benefit from it.

At a similar price, the Xiaomi Mi Pad 5 offers a more powerful processor and a more premium screen, but no similar kickstand. The Samsung Galaxy Tab S6 Lite is more expensive, but a tad more powerful.

Among the cheaper tablets is the Nokia T20, with a premium design but a subpar processor. There is also the Galaxy Tab A8 which is very cheap because its screen is a TFT.

The Lenovo Yoga Tab 11 is a tablet that relies heavily on one feature: its innovative kickstand, and it’s a winning bet. It is an extremely versatile device that adapts to almost any situation and use case.

The fact that it has a well-balanced technical sheet for a reasonable price is the icing on the cake. But for better build quality, an improved screen or a faster processor, it would be an immediate recommendation.

Adaptation of original test published on our sister site TechAdvisor.com.