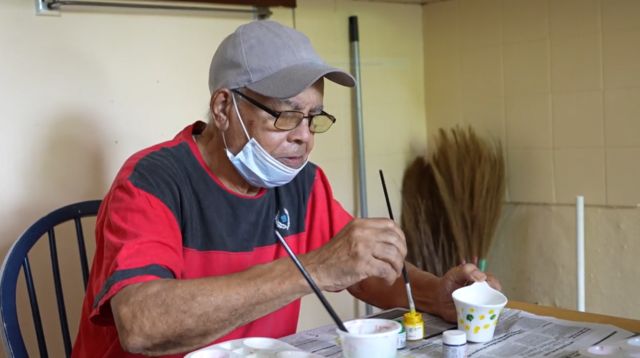 In Mauritius, a unique form of care for Parkinson’s disease helps patients cope with this neurodegenerative condition. A center organizes recreational sessions which play a beneficial role in slowing down the disease.

Sylvio and Bindou are in the early stages of Parkinson’s disease. They go twice a week to an NGO in Mauritius. They participate in recreational activities such as painting and yoga for example.

What most patients appreciate about this place is the feeling of a shared reality.

Bindoo Mohit, a patient with Parkinson’s disease thinks this is the only place she feels safe with her disease. ”We can talk freely, we can discuss things and things and we help each other. Because when we go home, everyone is going about their business and people have little time for us. Here, we have time for ourselves all day,” she explains.

Sylvio Allet another patient who frequents the center adds ”I only know this place so I can’t make a comparison but all I can say is that it’s been very positive so far”.

What is Parkinson’s disease?

For Dr. Harrish Reesaul, Neurologist, this is called tremor disease. ”Initially, people have asymmetrical tremors. Slowly the body begins to slow down, their actions slow down, they find it difficult to walk. They have masked faces, that is, they have a diminished expression. Their body becomes more rigid, they have difficulty walking and as the disease progresses, the disability progresses” explains the neurologist.

The disease leads to other disorders related to speech and memory. There is no treatment for Parkinson’s disease, but the patient can receive symptomatic treatment. A treatment which, according to Dr. Harrish Reesaul, is free in Mauritius.

Although Parkinson’s disease is irreversible, the motivation of these patients is to participate in activities that have a beneficial effect on the management of their disease.

”We know that when we are happy or in a positive context, the level of dopamine tends to increase in the brain, which will help because Dopamine is lacking in the brain when the person develops the symptoms and signs of the disease. of Parkinson’s. So whenever there are recreational activities or the patient is happy or doing something positive, it increases the level of Dopamine and alleviates the symptoms of the disease,” says Dr. Harrish Reesaul.

The meaning of a fight

A charity organizes activities and patients pay a lump sum to help with running costs. Her promoter makes her commitment a life lesson. The organization was initially dedicated to children with neurological conditions like her son, before she decided to create a section dedicated to adults with Parkinson’s or Alzheimer’s disease.

Uma Sooben, President of Joie de Vivre Universelle tells her story. ”After transforming the center into a leisure center for elderly people with Parkinson’s and Alzheimer’s disease… My father, after 2 years, was diagnosed with Parkinson’s disease” she tells us.

But Uma Sooben wants to see the good side of things “No, fate is not on me, no, it’s completely the opposite. It’s as if I had been chosen for a mission. After my son, now my father and the center was there. So what’s the message? I live in this situation and the center was there. I know what families face. I know how difficult it is. So I have to fight. It’s a fight”.

Sharon Juhl, president of an NGO, explains that Parkinson’s disease is the second most common neurodegenerative condition in Mauritius. ”At the continental level, we have not found figures on the prevalence of the disease. But on the world’s youngest continent, there are fears that the large number of working-age people and the accompanying dynamics of family transformation will leave behind patients with age-related illnesses like the disease. of Parkinson’s. Especially since it is estimated that the population aged 60 and over will more than triple by 2050”. For Sharon Juhl, there is a void to be filled.

For the president of Joie de Vivre Universelle, Uma Sooben, caregivers must be trained because it is not just about sitting still. ”You have to be with the person to help them walk. There is a lot of work to do. Caregivers need to be trained to be able to stay with the patient 24 hours a day. And caregivers are very expensive in Mauritius. I would like the Mauritian government to participate in this project for the elderly, because the Mauritian population is also aging and we need all this help. We can’t do this alone, we have to be a team,” she advises.

While waiting to be able to benefit from this type of service, these patients do everything to postpone the need for it. Life must go on despite illness.