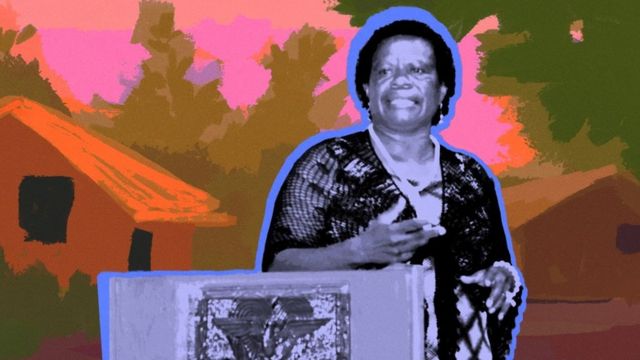 “They shouted in my face: ‘You killed him'”.

When Monica Paulus’ father collapsed and died of a heart attack, her brother accused her of killing him by witchcraft. She was threatened with death by torture.

“It was shocking to me. All the friends I had, all the family, they turned away from me and made me feel like a bad person,” she says.

Monica Paulus was forced to flee her hometown and live in exile in another province of Papua New Guinea, an island nation in the southwest Pacific.

But Monica’s story is not unique, and it could have been much worse.

Violence linked to the accusation of witchcraft (SARV) is commonplace in Papua New Guinea.

Although there is no reliable data on how common it is, government figures show around 6,000 incidents over the past 20 years.

Estimates, however, suggest the figure is higher, with thousands of victims – usually women and girls – being charged each year. Defendants are often subjected to brutal and sexual violence.

“We’re talking about extreme levels of violence, some of the worst I’ve ever seen,” says Stephanie McLennan, senior Asia initiatives manager at Human Rights Watch, who has worked extensively on the SARV issue.

“There are very vicious mob attacks and the victims are held captive, tortured, burned with iron bars, their clothes are stripped, and they are often killed. It is truly barbaric.”

The case of Mary Kopari made international headlines this year when she was brutally killed following the death of a two-year-old boy.

She was selling potatoes in a market when a mob captured her and burned her alive. No arrests were made although the incident was filmed and reported by local media.

Several other women were also targeted but managed to flee into the jungle, Ms McLennan said.

crucified in the streets

When Monica had to face her own witchcraft accusation, she was also able to escape.

“As soon as they accused me of killing by witchcraft, I was eliminated. They didn’t need any proof.”

“I was banned from my father’s funeral, I couldn’t attend at all. I knew that I no longer had a place in my family, my community or my tribe,” she recalls.

She thinks her brother accused her of witchcraft so that she could inherit the house alone.

But not all accusations are financially motivated – many stem from deeply held beliefs.

“Witchcraft is so ingrained in people,” Monica explains.

“Even when I was a little girl, there were murders, but they were accepted by the community, even if the tortures that the victims suffered were not as bad as they are now.”

“Before they killed in silence, now women are taken to the streets and crucified. It’s really inhumane.”

Over the past two years, the increase in the number of confirmed Covid-19 cases may have been linked to an increase in witchcraft-related violence, Human Rights Watch said.

“The fear that Covid will exacerbate this crisis and gender-based violence is a crisis has been very strong, says Ms McLennan.

Indeed, vaccine hesitancy and refusal of Covid is “enormous” in the country, according to Ms McLennan, meaning that deaths caused by Covid are attributed to witchcraft.

Earlier this year, a woman and her daughter were rescued by police after they were held captive and tortured, accused of practicing witchcraft when her husband died of a Covid-19 infection.

According to local media, the two women, aged 45 and 19, had their arms broken and were beaten with hot iron rods.

The country’s government has set up a parliamentary commission to combat this violence.

Its president, Charles Abel, said: “Violence is a cancer that eats away at Papua New Guinea and the community. We are a Christian country, but killing people in the name of witchcraft is not Christian behavior. ”

“People are being brutally killed and this cannot be tolerated. Covid-19 is only making the situation worse as people are using it as an excuse to appoint witches. This needs to stop.”

After her experiences, Monica put her own life in danger to protect others from the witch hunts.

“I’ve noticed a change since working on this, but I don’t see change coming any time soon — especially with the coronavirus,” she says.

While living in exile in another part of Papua New Guinea, Monica says she saw a woman being stoned to death in a public square. A man had tried to rape her, she bit his tongue and he accused her of being a witch.

“She was killed in front of government officials who witnessed the scene,” she said. “I knew then that I had to do something.”

Monica co-founded the Highland Women’s Human Rights Movement, a non-profit organization, and estimates she has saved over 500 people in the 15 years since she started help victims of SARV.

Volunteers help in a variety of ways, including relocation and rehousing, providing food and legal advice to hold the perpetrators to account

“Relocating people and saving lives is important, but we need to get justice for women. If communities see justice happening, then maybe we can change minds when it comes to accusations witchcraft,” Monica adds.

Since she started this job, Monica’s house has been burnt down. She fled the country and now lives as a refugee in neighboring Australia.

“It’s very difficult to be away from my three children,” she says. “If they are safe, then I will be at peace, but I am suffering.”

Papua New Guinea underwent a Universal Periodic Review before the United Nations (UN) last month, which concluded that its government must seriously address human rights issues in the country. , in particular gender-based violence.

Both Italy and Cyprus have pressed the Papuan government on the SARV issue and urged it to take action to prevent incidents.

Governor Allan Bird, deputy chairman of the House Committee on Gender-Based Violence, told the BBC that for the first time a “significant amount” of funding has been earmarked in the government’s 2022 budget to tackle SARV .

He added: “This should allow responsible agencies and NGOs that have been crying out for help for decades to finally respond… [même si] it remains to be seen whether we will be able to overcome the significant implementation challenges.”

In the meantime, it is largely up to the volunteers to protect the victims.

“Monica and other activists have been filling gaps for so long that the government should be filling,” says Ms McLennan. “Without them, we would have so many more deaths on our hands.”

And Monica isn’t giving up the fight.

“We need large-scale action to see a cultural change,” she says. “We only saved a few lives, but there were so many that we couldn’t save them all.”