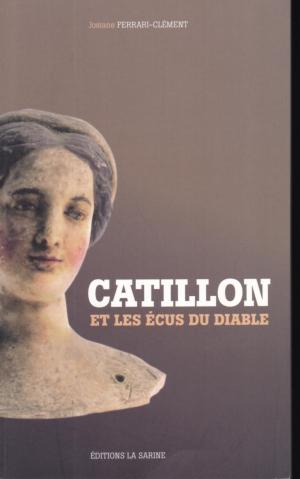 It was in 2008, the historian and deputy to the Grand Council Jean-Pierre Dorand (PDC) began a process to restore his honor to Catherine Repond, known as Catillon, the last woman in Switzerland to have been burned for witchcraft at the stake. du Guintzet, in Fribourg, in 1731. But the Grand Council of Friborg would go no further than a moral rehabilitation within the framework of a general text. Unlike Glaronaise Anna Göldi, Catillon will not be entitled to legal rehabilitation. And yet…

The woman who knew too much

In a book published in 2008, Josianne Ferrari-Clément, historian, highlighted sources which shed new light on the affair. According to her, Catillon – a figure that is part of the collective memory of the people of Friborg – was executed because she knew too much. The Friborg patriciate, then in power, made her a witch to hide the actions of a network of counterfeiters to which Catherine Repond was linked, in the same way as certain patricians. A cumbersome witness, we would have liked to silence her by accusing her of making a pact with the devil.

Back in a past with cruel mores. Born in 1663, Catillon lives in Villarvolard, a small village which today overlooks Lake Gruyère. She leads a bohemian existence, criss-crossing plains and mountains as far as France and Italy, always returning to her native country, finding her means of subsistence most often in begging.

Living in a shady world featuring deserters and “soldiers’ wives”, she has no children. Not hesitating to skip Sunday mass, she apparently rubs shoulders with a band of outlaws who notably use an oven at the foot of the Moléson to beat false crowns. Is it because of that or simply because of his extraordinary life? She has a bad reputation anyway. During his trial, the witnesses called by the courts will accuse him of a thousand evils. Bad tongue, it would sour the milk, spoil the taste of the cheese, make the cattle sick…

Béat-Nicolas de Montenach, bailiff of Corbières, threw her into the dungeon in May 1731. He accused her of having metamorphosed into a fox. The previous autumn, while hunting, he had indeed injured such an animal in the leg. But Catherine Repond has a foot in very bad condition. She may explain that a family from the Gibloux region, to whom she had asked for lodging, shot her during the night, we do not believe her. For sure, it is the shot of the bailiff!

She was very brave. She dares to accuse a priest of having abused her when she was returning from confession.
Josianne Ferrari-Clement

The sequel is worthy of a horror novel. Between April and August 1731, Catillon underwent 13 interrogations, four of which were under torture. She ends up confessing what her executioners want to hear: she goes to the Sabbath, dances with demons, has even given herself to the devil on many occasions. Catillon was finally strangled – a measure of clemency – before being burned on the hill of Guintzet in September 1731, at the age of 68.

The archives relating to his interrogations, however, allow another reading of the events. On many occasions, Catillon draws attention to facts that Béat-Nicolas de Montenach, who conducts the hearings, will not take into consideration. “She was very brave. In particular, she dares to accuse a priest of having abused her when she was returning from confession. At the time, it was almost unimaginable that a woman of her condition could question a person esteemed as a religious“, notes Josianne Ferrari-Clément.

During the trial, Catherine Repond mainly points to the actions of a certain Jacques Bouquet, a healer who is the father of her sister’s two children. He, she says, installed a boiler in their home at Villarvolard to melt metal and mint coins. But the judges don’t want to hear anything. According to the historian, they are afraid. They know that Catillon has connections within the Friborg patriciate. She knows in particular the wives of certain members of the ruling aristocracy.

However, it seems, according to the research of Josianne Ferrari-Clément, that notables are involved in a traffic of counterfeit money, which, gravitating by Friborg and the forges of Moléson, had ramifications as far as the Neuchâtel mountains and even beyond, in France.

The judges were afraid that Catillon was talking too much. So they accused her of sorcery to divert attention.
Josianne Ferrari-Clement

victim of the patriciate

“Catillon’s revelations could have been compromising. Freiburg was dependent on France, an economic partner which supplied it with salt for its cheeses, which it resold to it in return at the same time as it procured mercenaries for it. The judges were certainly worried that Catillon was talking too much. So they accused her of sorcery to divert attention“, says the historian.

Catillon therefore had a life on the fringes. She was probably involved in this counterfeit money smuggling business herself. But she was by no means a witch. “It must therefore be rehabilitated“, exclaimed Josianne Ferrari-Clément. A cry from the heart which, in 2010, was not heard in the room of the Friborg Grand Council.

In the absence of a legal rehabilitation of the person of Catherine Repond, wrongly condemned, the Parliament opted for a rehabilitation of the memory of all the victims of the Old Regime in a resolution with a general and non-binding text. The legislature of the city of Friborg then seized the case and decided to name a place in memory of the Catillon, but respecting its real name. 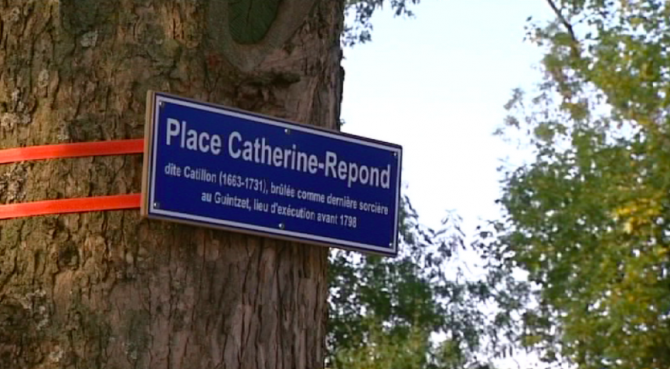 The witch, a figure who has become a feminist

Since the time of Catillon, and especially since the middle of the 20th century, the image of the witch has changed a great deal. Feminists have seized on it to affirm their independence and their freedom, their power and their femininity, their sisterhood and their proximity to nature, as this report produced at the end of 2019 shows:

To read also in Terriennes:

► Learned, independent, nulliparous, old, the witches of Mona Chollet greet you well
► “The Witches of the Republic”, exquisite avengers by Chloé Delaume
► In Ghana, camps for “witches“
► The night of the Beguines, a story of powerful and emancipated women in the Middle Ages, told in a book
► Romanian witches rebel> Death of Thérèse Clerc, founder of the House of Babayagas
► To be a woman, to grow old and to remain free… until the end. Interview with Régine Moulon, initiator of the “Free to the End” project

Who was Catillon, the last woman burned for witchcraft in Switzerland?