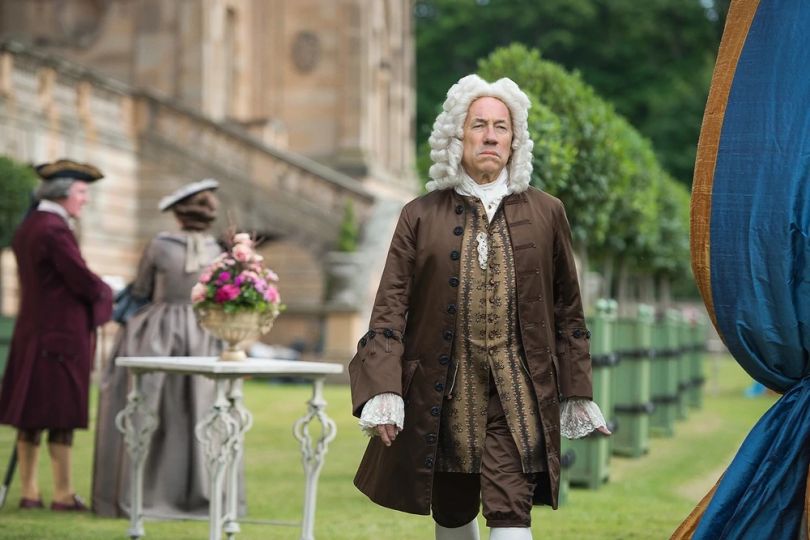 Claire and Jamie Fraser have had to deal with a hell of a lot of antagonists during their crazy romance in Outlander. From the terrible Captain Randall to the creepy Christie family, the Frasers have a habit of antagonizing all kinds of bad guys. Back to the most threatening of them.

#8. The Duke of Sandringham

The Duke of Sandringham is a character that Claire and Jamie thought they had as an ally but who turned out to be a real weasel unable to keep his word. Not only did he go back on his promise to help Jamie, which ultimately didn’t surprise the Frasers that much, but he also orchestrated the attack on Claire and Mary Hawkins, resulting in the latter being raped in an alley in Paris. A traitor and manipulator, the Duke of Sandringham thought only of himself and did not hesitate to bring down anyone who gave him trouble. He ended up having his head chopped off by Murtagh, and he deserved it.

If the Duke of Sandringham thinks only of himself, Count Saint-Germain is obsessed with revenge. When Claire asks for the destruction of her ship to prevent a smallpox epidemic, the count takes it into his head to make her pay for it. He is unable to see Claire as anything other than an adversary and spends season 2 trying to kill her, alternating between attempted poisoning and accusations of witchcraft. The Count went to great lengths to eliminate Claire, but it ultimately backfired, much to the delight of Sassenach fans.

fans ofOutlander tend to unanimously hate Laoghaire because she kept getting between Claire and Jamie. She even accused Claire of being a witch, narrowly missing sending her to the stake. Jealous of the Sassenach, Laoghaire has always been determined to separate the Frasers, even going so far as to attack Brianna when she meets the latter many years after her first friction with Claire. But Laoghaire’s main motivation remains the unrequited love she has for Jamie, and, if we can’t excuse the misdeeds she has committed, we can’t blame her for not managing to remove the ” King of Men” from the head.

Introduced in season 6 ofOutlandr, Malva Christie hides her game well under her innocent air. She introduces herself to Fraser’s Ridge as a pious young girl eager to learn more about Claire’s healing business, but it is quickly apparent that Malva is more treacherous than she looks. This is confirmed when she accuses Jamie of getting her pregnant, and we realize that all her actions were intended to destroy the Frasers. Malva ends up murdered and her murder is blamed on Claire. If her motivations are not yet obvious and the end of the story should be revealed in season 7, Malva has only made Claire’s existence more complicated than it already was.

Geillis was first the friend of the Frasers before becoming their enemy. It was perhaps the attrition and multiple failures to achieve his goal (to restore Scottish independence) that led Geillis to lose control. Still, during season 3, we discover that she has, among other reprehensible actions, killed several of her former lovers, convinced of the merits of her cause. She also sexually abused young Ian, then took it into her head to kill Brianna in order to fulfill a prophecy intended to put a Scotsman back on the throne. If patriotism is at the heart of Geillis’ motivations, it nevertheless proves that the end does not always justify the means.

The Browns are not a particularly recommendable family, and if, in season 6, Richard Brown is determined to destroy Claire and Jamie, it is his brother Lionel who is the most despicable of the two. In season 5, Lionel joins the long list of characters who cannot see Claire in paint. Following the publication of an article on contraception, he decides to make Claire pay and attacks the Ridge to kidnap her. Then follows a series of tortures, before Lionel and several of his men end up raping Claire. Real rot who can not accept that a woman can have control of her body, Lionel Brown is killed by Marsali but will continue to haunt Claire for a long time.

Monster as we do little, Stephen Bonnet is the typical example of the guy who did not have enough hugs when he was little. Unable to understand what love really is, Bonnet is a pirate who assaulted the Frasers, attacked Claire and Jamie, before killing their friend Leslie and, above all, brutally raping Brianna. When he found out she was pregnant, he tormented her for several years before eventually taking her hostage. In short, a true sociopath, Stephen Bonnet is one of the most despicable characters inOutlander and he demonstrates this repeatedly by his lust for violence, his treatment of the women he abuses with all his might, and his inability to recognize the evil in everything he does.

Captain Jonathan Randall is hands down the baddest villain of all the villains inOutlander. He’s a sadist who has no greater joy in life than torturing Claire and Jamie. He attempted to rape Claire, manages to rape Fergus and Jamie, and takes pleasure in subjecting the Frasers to as many atrocities as possible. Black Jack Randall’s motives simply boil down to wanting to cause pain. He has no other desire than to hurt Claire and Jamie, and what’s worse is that he doesn’t just cause physical pain. Indeed, Black Jack is particularly keen to traumatize his victims on a psychological level. It’s all of this that makes him the most gruesome of the antagonists seen in Outlander.

The six seasons ofOutlander are available on Netflix.