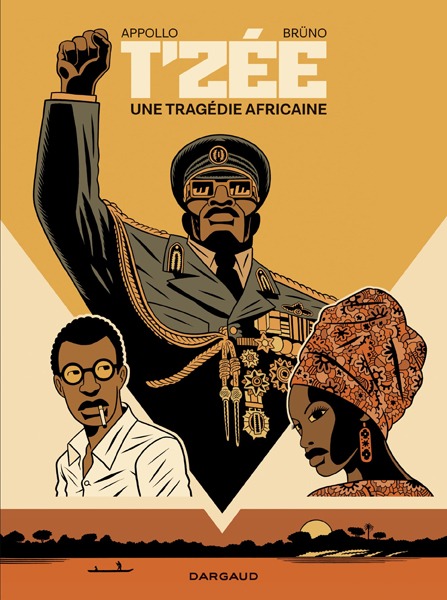 Like a classic tragedy, this graphic novel due to Apollo (script), Bruno (drawing) and Laurence Cross (colors) depicts the last gasps of a dictatorship, somewhere in central Africa, with its causes and consequences on the situation of the country and on some individuals.

Act 1 is remarkable for the amount of information it provides, while advancing the action, set in a country never mentioned but which owes a lot to Zaire under the era of mobutu. Cleverly, the authors prefer to tell their story rather than trying to rewrite History, which is too complex for a comic book, even if they can be blamed for a certain tendency to oversimplification. These simplifications allow them to quickly pass over all the well-known clichés of Africa (notably corruption), to focus on an atmosphere that can only go wrong. For those who are interested in absolute truth, it is better to delve into writings such as that envisaged by the character of the journalist who questions her father during the fourth act, to tell the story from the point of view People. Short, T’zee is nothing other than a fictional character very largely inspired by the real character that was Mobutu, the authors leaving it to those who know the real facts to make certain connections.

Most of the action takes place in the presidential palace, built far from the province-capital, on “The island at the end of the river” deep in the forest. A place called Gbado and wanted by the Marshal T’zee, strong man of the country for more than 36 years, who ensured that “The palace in the jungle” thrones in the middle of a whole built from scratch in his native region. But T’zee does not appear during this first act. On the other hand, we meet Hyppolite, his last son, as well as Bobbi, his young wife, both residents of Gbado. Bobbi “The Angolan” was sent to Gbado by T’zee to protect her. Young, beautiful and seductive, a superficial woman who loves luxury, Bobbi succeeds Mama Maréchale, T’zée’s deceased first wife. Hating Hippolyte (slightly younger than her), Bobbi arranged to send her regularly to Europe, as far from her as possible. Tension reigns in Gbado because, following an uprising, rebels control most of the country and of the regular army, only the presidential guard remains. The rebels hold T’zee who is imprisoned in Makala prison, awaiting trial and there is no doubt that he will be sentenced to death. Indeed, whatever T’zee and its supporters may think, the country has long suffered from a lack of freedom, because T’zee has behaved like a dictator for too long, with the support of the French. His action put the country in a situation of economic bankruptcy. Moreover, strong antagonisms risk putting the country on fire and bloodshed.

The fundamental element that finally appears from Act 1 is the place of witchcraft in the mentality of the country. Indeed, Bobbi comes to see Ndoki, a (blind) sorcerer, to question him: T’zee is he still alive? Ndoki replies that not only is T’zée still alive, but that the old leopard will escape. What follows shows that not everyone believes in witchcraft, but that its weight remains staggering in Africa. She is ultimately the pivot of the plot, with a vengeance that will continue its work beyond the death of a character. We will also see it during a wrestling tournament very different from what Westerners practice. All the elements are in place, the tragedy can begin, with its series of dramas and its reversals of situation.

With this graphic novel selected for the Fawn of high school students at the Angoulême 2023 festival, the authors captivate and seduce. The scenario is particularly intelligent and dense, while avoiding unnecessary chatter. It reserves a few judiciously placed flashbacks and features characters that are as surprising as they are different. The strong personality of T’zee opposes the more retiring temperament of Hippolyte who knows his place in the shadows. Hippolyte is torn between his lifelong admiration for his father and what those he was able to meet as a student in Paris think of him. He hesitates between an attempt to release his father in force, co-organized by Walid (the Lebanese) and Arissi (daughter of a hero of independence whom T’zée had executed as a traitor, which the people did not never been able to cash in), his lifelong friends or fleeing abroad to save his life. Another important character, Bobbi, is shown as a woman aware of her power of seduction and who takes advantage of it, which does not prevent her from evolving. She will go so far as to take on the role of warlord.

The drawing matches the storyline perfectly. The set regularly displays a cinematographic tendency (see the deliberate poor quality video rendering of a key moment just before the end), with many shots and framing all in width. All this is perfectly highlighted by the colors that ring true compared to what we know and imagine of Africa. The general rendering is quite sumptuous, perhaps even a little too much. Indeed, everything in this comic breathes elegance, whether it is the line of the designer, the colors, as well as a scenario resulting from long years of reflection and development, as Apollo explains in the text of comments found after the end. Although it contributes to the pleasure of reading, I consider that this aesthetic research does not really fit with the general spirit of what comics show.