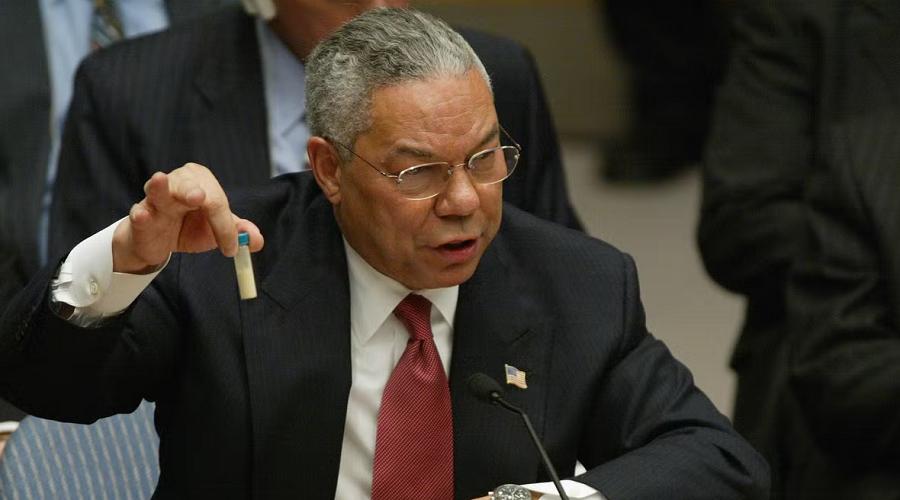 The vial that destroyed Iraq exhibited at the UN by Colin Powell. DR

Contributed by Saadeddine Kouidri – During her press conference on Monday, November 21, the US ambassador to Algiers seems to have wanted to “dictate” to the Algerian authorities the diversification of their purchases of military equipment because it is predominantly Russian. Was it by chance that the next day she was received by the Prime Minister?

An ambassador is also a promoter of the products of his country. The United States is by far the largest arms exporter in the world. Knowing that Algeria has doubled the ANP’s budget in 2023 poses a new challenge to the ambassador, which is: how to take advantage of the 12 billion dollars that have been allocated to defence? For this, she does not praise the weapons of her country, she does not speak of the laws of the market including competition, she denounces the lack of diversity among Algerians with regard to the purchase of weapons and interferes in business who do not look at it. It reminds us of one of the characteristics of American power, which is that nothing is forbidden to it when it comes to its interest. If he cannot sell or buy a product, he gives himself the right to monopolize it or to impose it in this case.

Political authority is always associated with auxiliary power. The first that we know is that of sorcerers. It seems more effective than religions and ideologies since we come back to it. The technologies of influence commonly qualified as information and communication sciences have their own languages, their own signs which mix the real and the virtual until they create their hieroglyphs. To show a vial and make believe that it represents a danger, to deny it after the annihilation of a millennial country or to qualify Israel as a democratic country and to make millions of people believe it is witchcraft.

The strategy of the supremacists is to subject all nation states to their wishes. It’s elementary that to defeat the other, you have to start by weakening his defense.

For Iraq, their wizards had invented the vial of anthrax that Colin Powell presented as proof of Saddam’s weapons of mass destruction at the UN. From Iraq to Syria, via Libya, they pursue the destruction of all countries that do not align themselves with them, prioritizing countries that have large hydrocarbon deposits. It is by pursuing this goal, muted for a few months by Putin, and his war of preventive liberation, and two years by the Covid, that their witch comes to reveal that there is Russian armament in her vial to revive the offensive of the western world, by showing that Algeria is aligned with the enemy camp of “freedoms”.

On February 5, 2023, US Secretary of State Colin Powell brandished a vial of anthrax at the UN to prove the presence of weapons of mass destruction in Iraq and demonstrate the need to intervene in Iraq, assuring that there was “no doubt that Saddam Hussein has biological weapons and the ability to rapidly produce more.” That’s why we made this war on Saddam, said Bush and his lackeys, except France!

She was against the war in Iraq, not on principle, but for the gallery since as a member of the Security Council, she had the right of veto. In addition, any speech against the war after the resolution 1441 of the UN Security Council voted on November 8, 2002 to disarm Iraq, which was a blank check in the United States to make the war. Any speech to condemn it, after this resolution, was utopian, like that of Villepin at the United Nations when we know that a UN resolution allows the sending of troops under American command.

President Chirac was incapable of opposing the leader of US imperialism, especially since he knew that three months earlier the United States Congress had voted unanimously to support President Bush if he decided to go to war.

Faced with Bush, Chirac was only a performer, like the officer he was when, called up from the French colonial army, he did not stand out from the torturers as the General Jacques Pâris de Bollardière and his deputy during our Revolution by their resignation which led to their imprisonment or in the image of these thousands of young conscripts who desert so as not to be accomplices of colonization.

Colin Powell’s anthracite vial is just a remake of Ambassador April Glaspie’s lie to Saddam that she gave the green light to occupy Kuwait. This other witch was able to bring Iraq back to the years 1919-20, except that instead of British tanks there were American tanks in 2003-2004 (promotion of armament requires).

In her conference, the American ambassador affirms that the United States “shares the same vision with Algeria on Western Sahara by supporting the political solution under the auspices of the United Nations and the personal envoy of its Secretary General Staffan de Mistura “. Is it also a coincidence that the assumption of duty of the new ambassador Puneet Talwar in Morocco coincides, within a few days, with the meeting of Antonio Guterres with the king?

Wouldn’t the mission of the new ambassador be to weaken De Mistura’s authority, especially when the king, during this interview, reminded him of Morocco’s official position on the Sahara without changing one iota. We can believe that Guterres was bewitched to the point of putting the Sahrawi cause back in the mouth of the wolf. From Algiers, the ambassador, who denounces the long duration of the Saharawi problem, knows that it has been decided to make it last, but for the interest of her country; of Algiers, she shares the vision of Algeria, or at least she confuses us naturally to make us believe that we share the same vision. She takes us for this crank of Saddam listening to April.

The witch with the vial: is the United States threatening Algeria? – Patriotic Algeria