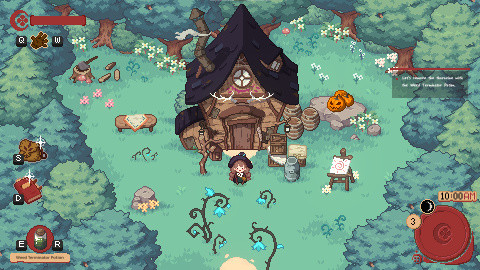 As every week, we offer you an overview of the releases to come over the next seven days on the side of the indie sphere.

Little Witch in the Woods

SUNNY SIDE UP invites us to embody an adorable witch this week in Little Witch in the Woods, a colorful pixel art RPG. Ellie is a young protagonist who is still learning witchcraft. Fresh out of her school of sorcery, she must now learn to develop her skills in order to realize her dream: to become a powerful witch. It will therefore be for our young heroine to embark on a great adventure made up of exploration, collecting new ingredients and preparing potions. Learning spells is of course also on the game’s agenda. During her development, Ellie will also form strong bonds with her neighbors and will have to help them regularly.

Developed by Stunlock Studios, V Rising Takes you to an online open world filled with blood drinkers. The goal: hunt your prey, avoid the light, and raise your own castles to settle down and prosper. The game begins after a long sleep, as you wake up weakened. Your first mission will therefore be to regain your strength, before starting to build your empire. You will have to be careful with the competition: the other players will also seek to dominate the world you covet. V Rising would have as parents Valheim and Diablo. In May, during the announcement, the game marketing director of the studio said it wanted to provide “the full vampire experience” to players.

Already appeared on the hybrid console, Gibbon: Beyond the Trees takes you on a world of exotic and colorful artistic direction. Proposed by Broken Rules, the title puts you in the shoes of a gibbon that moves from tree to tree, and from vine to vine. Your hero is on a mission to find his family. The story is about the beauty of wild nature and the destructive force of human civilization. Gameplay-wise, players must master a dynamic movement system to swing and somersault. A game that simply offers you to master “the art of brachiation”.

Single-player narrative puzzle game, Eternal Threads tasks you with playing as an agent whose goal is to fix a corruption in the time stream. Your actions and choices will impact the course of your story. The Cosmonaut Studios title takes you to May 2015, a week before a fire killed six people. As you will have understood, it is the fate of six people who rest on your shoulders. You will have to influence their choices and make them make the right decisions; “Each character can survive in different ways and each outcome will have a profound impact on the rest of their life“. The advantage being that you can view and modify the events experienced as many times as desired and in the order of your choice.

First exclusive to the Epic Games Store, the strategy game Old World signed Mohawk Games is making its way onto the Steam platform. This is the brand new game from Soren Johnson, who is none other than the designer of Civilization IV. In this 4X, you will be entitled to extensive work on the strategic and narrative aspects. The player’s objective is to build his own Empire over generations. It is up to you and your leader to grow your Greek, Persian or Roman civilization. Each of the 7 kingdoms includes a total of four families of nobles. Note that only the French translation beta will be available at release.

The 6 indie games of the week not to be missed